An estimated 5,000 fans forced their way into Wembley Stadium for England’s Euro 2020 final clash against Italy, leaving ticket-holding fans to stand on the stairs. Here, Jack Bibb reports on what he saw and how protocols have changed since May’s COVID test events. 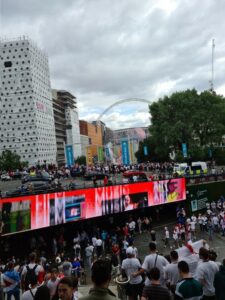 What started with the potential to become one of the most historic days in English sporting history, soon became a day to forget – on and off the field.

The party started early in Wembley, on Sunday 11 July, with fans gathering around lunchtime for the evening kick-off of the Euro 2020 Final, between England and Italy.

As the day progressed, the gathering developed into a drug and alcohol-fuelled mob, rapidly gaining traction as the hours rolled along. Football Association Chief Mark Bullingham described the scene as a “six-hour siege” by “lawless yobs,” in the days that followed the match.

Idiotic behaviour displayed by those throwing around bottles and flares meant that the atmosphere took a turn for the worse early on.

The mayhem ensued in the hours before the match, eventually spilling over into the stadium. The scenes outside Wembley left looking like a war zone, with empty beer cans and broken glass crushed into the ground in surrounding areas.

Regular England match-goers described the experience as “shocking and terrifying,” and it was abundantly clear early on that Wembley, on this occasion, was not a family-friendly zone.

Bullingham, in a letter to the Department of Digital, Culture, Media and Sport chair, continued: “We are focused on how our stadium team of police, security and stewards had to battle the horrendous actions of thousands of lawless yobs during a six-hour siege – something no stadium is set up to deal with.

“We are determined to get to the bottom of what happened both outside and then inside Wembley and are aware that everyone will need to learn the lessons of the day and instigate changes for the future where needed.”

Wembley ‘instrumental’ in the reintroduction of fans 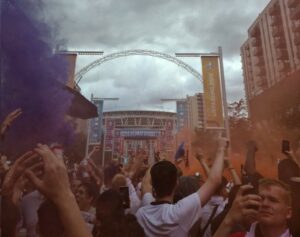 Hosts to both the Euro semi-finals and final, 60,000 tickets were allocated for Wembley – the largest capacity at a football match since coronavirus restrictions hit last year.

The national stadium was instrumental in the reintroduction of fans in April, hosting 8,000 spectators, as the government ran a series of test events to allow fans back in stadiums.

In line with COVID-19 protocols, fans were obliged to show proof of a negative lateral flow test, or, evidence of a vaccine passport to gain entry to the stadium – failure to do so would prevent access.

Wembley was host to 22,000 fans during the tournaments group stage matches, increasing to 40,000 in the knockout stages, before allowing 60,000 in for the semi-final and final – three-quarters of the venue’s capacity and the most at a UK football match since coronavirus struck.

Both semi-finals ran according to plan, barring few minor incidents. However, this day at Wembley differed from those before with the excitement of England reaching a major final for the first time in 55 years the catalyst for chaos.

To reduce the risk of potentially spreading the virus, staggered times were appointed to fans, with the first batch arriving from 5.15 pm.

Fans continued to make their way from Wembley Way into the stadium, the majority of which entered around 7.00 pm.

Upon entry, fans were required to show evidence of their negative COVID status – this being where the enormous hiccup occurred.

With many gates under-staffed, several waves of ticketless fans stormed their way past the defenceless security guards – bolting to a hidden safe spot to avoid being caught.

Those who managed to escape security remained ticketless, however, and thus were unable to enter through the turnstiles – the only legitimate way for spectators to enter the ground.

Could facial recognition have been used to improve security and prevent disorder? 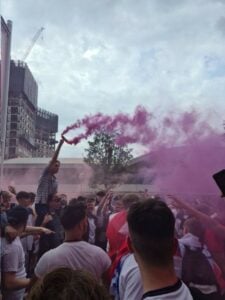 The scenes that followed were potentially the most distressing of the day as some fans had their tickets stolen by those attempting to break in, whilst the other stragglers either forced or snuck their way through other entrances. UEFA believe that as many as 5,000 ticketless fans were able to access the stadium. The Athletic reports that other incidents included:

England defender, Harry Maguire’s father was one of those caught up in the mayhem, suffering suspected broken ribs in a ‘stampede on his way into the ground, while Formula 1 driver Lando Norris was amongst those who were attacked, he was mugged and had his watch stolen as he was making his way home after the game.

Once inside the stadium, ticket-holding fans turned up to their seats to find them stolen by others – who would then refuse to move, acting aggressively to any confrontation.

“We went to get a drink and once we came back eight topless men were spread across our four seats, refusing to move.”

Rather than escorting them out of the stadium, the men were simply asked to move to the next seats along, making quite a hostile atmosphere for the group of friends.

Another witness, an official member of staff at Wembley, explained how their office was invaded by a large number of fans.

“At one point our office door was open and a crowd of a least 50 entered, expecting us to grant them access to the stadium,

“When we denied them access we were met with jeers and shouting. We had to lock the door to stop them from coming back in.”

SHP’s sister site, IFSEC Global, has looked at whether facial recognition could have been used to improve security and prevent disorder.

The FA has since apologised to those families affected by the events at Wembley and a full investigation has been launched to identify those responsible for the trouble caused before and during the match.

Metropolitan Police confirmed that 86 people were arrested following the match, including 53 at Wembley, for a number of offences including public order offences, ABH, drunk and disorderly and criminal damage.

A total of 19 officers received injuries.

Across the tournament there were over 130 arrests.

Discover how you can advertise with us
Euro 2020: Concerns raised over policing as 5,000 ticketless fans sieged Wembley Stadium An estimated 5,000 fans forced their way into Wembley Stadium for England’s Euro 2020 final clash against Italy, leaving ticket-holding fans to stand on the stairs. Here, Jack Bibb reports on what he saw and how protocols have changed since May’s COVID test events.
Safety & Health Practitioner
SHP - Health and Safety News, Legislation, PPE, CPD and Resources