In total 58,000 people attended sporting and cultural events in the first phase of the ERP in April and May, with 28 positive COVID-19 cases; 11 of these individuals were ‘potentially infectious at an event’, with a further 17 potentially infected at or around the time of the event.

The report comes a week after it was announced that the capacity for the Euro 2020 matches at Wembley Stadium in London would be increased from 22,500 to around 45,000 (approximately 50% capacity) for the second round matches between Italy and Austria, and England and Germany, before being increased to near 75% capacity, around 60,000 for the semi-finals and final in July. 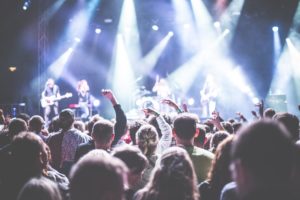 Sheffield’s Crucible Theatre was at full capacity for the World Championship final May 2, becoming the first venue in more than a year to see a capacity crowd at a UK sporting event.

Not since the Cheltenham Festival in March 2020 had a capacity crowd been in attendance at a UK sporting event. The World Championship Snooker final, between Mark Selby and Shaun Murphy, on Sunday May 2 was the first of a series of government authorised test events that was able to play host to a capacity crowd. The tournament began on 17 May, at 33% capacity.

On the previous evening, clubbers in Liverpool returned to a trial night at a warehouse – the first time a club venue has been allowed to reopen since the pandemic began. 6,000 people were expected to be in attendance over the two-day event. Ticket-holders were not required to socially distance or wear face coverings, but needed a negative COVID test result before they were allowed in. Here, SHP spoke to Eddy Grant, Director of Symphotech, the firm behind safety of the event, to look back on how it went and what it means for events moving forward.

Indie band Blossoms headlined a 5,000 capacity event, also in Liverpool on Sunday evening. The mini-festival in the city’s Sefton Park required ticket holders to take a supervised lateral flow test at one of four testing centres in the city the day before, and were only allowed in if the test was negative. The BBC reports that festival-goers were also strongly encouraged to take more sensitive PCR tests on the day of the show and to do so again five days later. That will be crucial to working out whether there was any spread of the virus.

The UK’s first full-capacity concert was expected to take place on May 29, when James Blunt was due at the Royal Albert Hall, but that has since been postponed. Odeon Cinemas announced that they would reopen doors at most of their sites on May 17.

8,000 fans were given green light to enter the national stadium on Sunday 25 April – the second time spectators have been allowed inside stadiums since the third UK lockdown was enforced. Jack Bibb reported from the event… 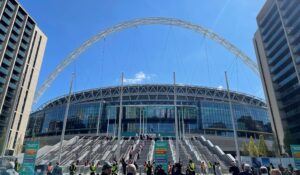 In February 2021, Prime Minister Boris Johnson outlined the steps of a four-part roadmap to lift the coronavirus lockdown.

As part of the plan, the PM announced that: “The turnstiles of our sports stadia will once again rotate,” with up to 10,000 fans expected to be back in major sporting stadiums by mid-May.

The Government proposed a series of ‘pilot’ events in cooperation with the English Football League (EFL) which would see a small proportion of fans attend two matches at Wembley Stadium.

The FA Cup semi final tie between Leicester City and Southampton on 18 April was the first match to reintroduce fans back into a stadium, with 4,000 local residents successfully watching the clash at Wembley Stadium.

A week later, the ‘Home of Football’ once again opened its doors; this time to 8,000 spectators – a blend of club supporters, NHS staff and local residents.

2,000 tickets were allocated to both the Manchester City and Tottenham Hotspur fanbases, with the remainder being distributed in the local area.

Local residents filled out a ballot, communicated to them via their county council. If successful they were then required to fill out a consent form and return a negative lateral flow test, no more than 24 hours prior to the match.

One attendee said: “Getting a lateral flow test was simple, thanks to Wembley Stadium communicating the information clearly.

“There were plenty of times available to book and the test itself only took ten minutes to complete.”

According to the official government website, the ‘R value’ currently sits between ‘0.8 to 1.0’ – one of the lowest values in the UK since the peak of the pandemic around September time.

However, necessary protocols were still enforced inside the venue to ensure the safety of all in attendance.

As with every high-profile sporting event, bag checks and other general safety procedures were in place to prevent any prohibited items from entering the ground. 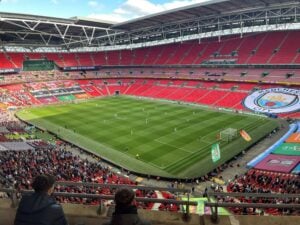 Coronavirus protocols on the day included wearing a mask at all times – except when eating and drinking – and socially distancing as best as possible, which we’ve now become accustomed to in everyday life.

Despite some people booking seats with family members or friends, spectators were allocated seats one apart from each other to reduce the risk of any potential spread of the virus – stewards would instantly separate any spectators who were seated together.

Sanitising stations were plentiful in and around the ground and staff actively encouraged the use of these machines.

Reflecting on the measures put in place, one spectator said: “During the event I felt as safe as I could possibly be.

“It is important that as this lockdown ends, we make sure we do all we can, so the progress isn’t halted. Wembley Stadium were brilliant at making the event safe.”

Another fan agreed, saying: “I felt completely safe, everyone around me kept their masks on at all times.

“The spacing between the fans helped put me at ease. I felt distant enough to be safe, yet, still involved with the atmosphere of the crowd.

Participants were urged to take a home PCR test five days after the event. This was not compulsory, merely a request by the organisers of the event to assist in data gathering and research.

The test event was deemed a success and as such the Government allowed 21,000 supporters to be able to attend the FA Cup final between Chelsea and Leicester on May 15.

Wimbledon tennis tournament, which started in London on June 28, is set to have capacity crowds at both the mens and women’s finals. All England Lawn Tennis Club Chief Executive, Sally Bolton, had earlier told the BBC that measures have been put in place, such as mandating that all players stay in hotels, rather than rent private properties, for the duration of the tournament and there will be fines in place for breaching COVID regulations.