Dr Tim Marsh PhD, MSc, CFIOSH, CPsychol, SFIIRSM is MD of Anker and Marsh. Visiting Professor at Plymouth University he is considered a world authority on the subject of behavioural safety, safety leadership and organisational culture. As well as many of the world's most recognisable industrial names Tim has worked with diverse organisations such as the European Space Agency, the BBC, Sky TV, the RNLI and the National Theatre in his 25 year plus consultancy career. He has key noted and chaired dozens of conferences around the world including the closing key note at the Campbell Institutes inaugural International Thoughts Leaders event in 2014. He has written several best-selling books including Affective Safety Management, Talking Safety, Total Safety Culture, the Definitive Guide to Behavioural Safety and Organised Wellbeing. Previously he led Manchester Universities ground-breaking research team into behavioural safety methodologies in the 1990s.
May 24, 2022

In his latest blog, Tim Marsh discusses how a simple change to the way risk is managed, can produce positive outcomes.

This is intended as a companion piece to my Boeing article (Which is a classic negative case study). In this case Formula One’s safety journey is a very positive one. (If you’d like it straight from the ‘horse’s mouth’ you might to look up Mark Gallagher formerly of Jordan and Red Bull).

The bald facts are these. Formula 1 averaged more than a death a year for decades before the San Marino Grand Prix in 1994. Infamously, the dramatic improvement began there as it is, infamously, when both Ayrton Senna and Roland Ratzenberger died and a third driver, Rubens Barrichello, was badly injured.

However, since 1994 there has been just the one death in 28 years. (The Frenchman Jules Bianchi in Japan in 2014). By any measure that’s something of an impressive step change and transpires it came from a combination of both ‘top-down’ and ‘bottom up’ methodologies.

Many press conferences were held directly following the crashes by the likes of Max Mosley, Bernie Ecclestone and others. What they said can be summarised as: “This is a personal tragedy for the families of Ayrton and Roland, but also a disaster for Formula 1 itself. Nothing like this can happen again or it could be the end of the sport. So, we insist our world class engineers turn their expertise to safety as well as to speed and, more than that, then share any innovations that they come up with”.

Now this is, of course, at a glance was simply a variation on the 1001 ‘never again’ presentations we’ve all seen that sound good but come to absolutely nothing. However, this proved an exception. Subsequent innovations included deeper tyre walls, longer run off areas, head and neck braces, better PPE, enhanced survival cells, wheel tethers, halos, F1’s version of the ‘black box’ and others.

I’m no motoring expert to discuss the merits of each but as above, the figures speak for themselves.

The ‘Bottom Up’ Element

What is less well known is that some months later, at the German GP in July, another incident made the front pages – largely because of the hugely spectacular photographs. (It led to only the driver losing his eyebrows and many a power-point slide about the vital importance of PPE has used it!). 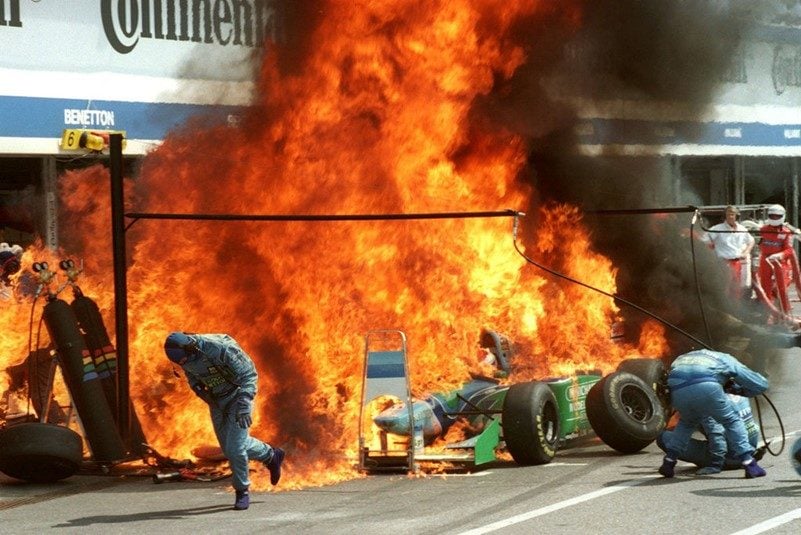 What’s most interesting from a cultural perspective, however, is that the investigation showed that, amongst other factors like a fumbled attachment, a fuel filter had been removed by a relatively lowly ‘trying to be helpful’ mechanic to speed up petrol flow by a fraction of a second. You might ask why anyone would risk something like this to save a few tenths of a second but it’s worth remembering that the world record for a pit stop is 1.82 seconds (Red Bull). This ludicrously quick figure did not of course involve refuelling as well as a tyre change but you get the idea. This really isn’t a Kwik-Fit ‘get yourself a coffee mate and come back in half an hour’ situation but one where fractions of a second count.

Commentators like the aforementioned Mark Gallagher have suggested that in retrospect, it’s become clear that understanding the vital importance of engaging with and empowering the most front-line staff proved as important as leadership in the success story.

One of the great frustrations of safety consultancy is the client looking for a magic bullet that will somehow have their workers simply ‘pay more attention and/or take more care’. This can certainly be achieved for a week or so by having someone like my esteemed business partner Jason Anker give a powerful talk but we all know that lasting change requires astute and targeted change to the physical working environment and/ or culture.

So, the key learning point is that despite the hugely impressive figures quoted above not a single driver has “slowed down” by as much as a fraction. The success story is not about the drivers at all but all about the change to the way the risk of driving an F1 car is managed.

It’s also worth mentioning that the post Bianchi push to greater safety has centred on the power of data analysis – after the event and in real time – and the use of sophisticated simulation technology. (Worth mentioning as these are both rapidly emerging fields generally). Today, the first time a young F1 driver drives a notoriously ‘dangerous’ circuit it’s simply not actually anywhere near as dangerous as it was. However, more than that, it’s already the 101st time they’ve ‘driven’ it and they already know exactly what might go wrong, where, when and why.

This pro-active approach of course delivers lots of opportunities to work upstream of the accident and ‘break the chain’. (And a free book to the first reader who points out why that ‘Heinrich principle’ reference is in italics).

Interesting observation highlighting the importance of training in my opinion. I look at the emergency service sector in the same vain where digital simulations, command scenarios and practical scenarios have evidently improved the sectors ability to respond to situations in a controlled and knowledge/experience led manner.

Good to see a fleetwood mac reference as well of course 😉

Thank you Mike … (but Dave Hazell beat you to it!)

‘Heinrich principle’ reference is in italics because organizations started conducting detailed investigations into the root causes rather than blaming people for the accidents and encouraged employers to control hazards, not merely focus on worker behaviors.

Hi Ali – all that is true and design hierarch and well and Heinrich but it was a trivia quiz question in truth – with the answer The Chain by the great Fleetwood Mac .. used to be the (hugely evocative) soundtrack to the Formula One TV programmes (a UK centric trivia question sorry …).

Would the reference to ‘break the chain’ be in italics due to it being a line in The Chain by Fleetwood Mac and the (in)famous bass line intro to F1 coverage in years gone by?!

Hi Glen – you are right (though Dave H fastest). Infamous for any non UK readers because it’s almost impossible to have it come on the car radio and not floor the accelerator!

As above Robert … correct by on the podium only. The garland and champagne to Dave H

Unsure if my original comment posted or not but ‘break the chain’ would indeed be a reference to the Fleetwood Mac track, ‘The Chain’, which was used as the intro music for Formula 1 programming in years gone by.

Correct and as above Glen. Thank you for playing! Tim

Great positive example of proactive safety improvements. Unbelievable that it took until 1994 for change to happen based on the previous fatality rate but shows how cultures have evolved, and continue to evolve, since that time.

Italics to emphasise the point that safety has not impacted negatively on performance?!

Thanks Rhys – As with Ali – true but question more trivial than that!

Go on then … F1 Theme Tune by the Maccers of Fleetwood?

Now they have finally arrived two books in the post first thing David …one for you and one for the boss! 🙂 Tim