Dr Tim Marsh PhD, MSc, CFIOSH, CPsychol, SFIIRSM is MD of Anker and Marsh. Visiting Professor at Plymouth University he is considered a world authority on the subject of behavioural safety, safety leadership and organisational culture. As well as many of the world's most recognisable industrial names Tim has worked with diverse organisations such as the European Space Agency, the BBC, Sky TV, the RNLI and the National Theatre in his 25 year plus consultancy career. He has key noted and chaired dozens of conferences around the world including the closing key note at the Campbell Institutes inaugural International Thoughts Leaders event in 2014. He has written several best-selling books including Affective Safety Management, Talking Safety, Total Safety Culture, the Definitive Guide to Behavioural Safety and Organised Wellbeing. Previously he led Manchester Universities ground-breaking research team into behavioural safety methodologies in the 1990s.
August 18, 2020

I’ve often written about personal safety in these pages. Specifically, I’ve suggested that what lands us in hospital, or worse is, statistically, seldom a consequence of the most dangerous things we do but very often a consequence of a moderately risky but frequent action. This usually involving some combination of: losing our footing/tripping, losing focus and taking our eyes and/our minds off the hazard or moving into (or not out of) the line of fire. These directly caused most usually by tiredness, rushing, being angry or frustrated or having simply habituated to the risk.

In my life I’ve probably crossed busy roads on foot about 150,000 times or so without any incident. Not even a single near miss I can recall. 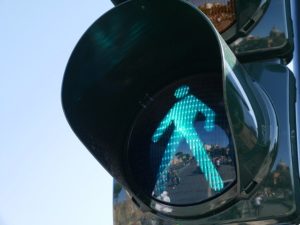 On Saturday, however, I went for crossing 150,001. Paying full attention I’d half crossed a busy road near where I live then paused standing not in the ‘middle of the road’ but on a checkered section where cars are not allowed to drive. (It’s actually painted red to highlight that). However, as I stood looking left to confirm it was safe to continue crossing (I’m in the UK) I was hit by a car from behind and launched into the air … luckily landing mostly shoulder first.

I don’t know what the driver was thinking, but the facts are: There is a traffic light about 80 yards up the road from where I was hit; there is a filter lane that starts about 30 yards further up the road; this filter lane was empty; the traffic light had been green for a while. (Indeed, my last thought before several variations of WTF!!, was ‘come on, isn’t it about time you turned red and stopped this flow of cars so I can get across …’).

When we talk about excellence in personal risk management we talk about the importance of ‘never assuming’ and that should is a four letter word. We also have rules of thumb that drive pro-active habits like ‘always give yourself the leeway to deal not only with your mistakes but also the mistakes of others’ and ‘assume everyone else is drunk, stupid or both’. It was light, I wasn’t rushing, wasn’t distracted, (my phone was in my pocket), I was calm, sober and legally compliant so I should have been safe. Indeed, I had been safe about 150,000 times before in similar circumstances … but what I didn’t do was double check an assumption…

So, finally, a note on the nature of luck: My business partner, Jason Anker MBE, often points out that when we fall we usually don’t injure ourselves at all – it’s just hurt pride or dignity maybe. But sometimes, however, we land awkwardly and break a wrist, or an arm, or tragically, we land badly on our back as Jason did. And sometimes we can hit our heads which can of course even prove fatal. The point is that once we’re falling we’ve lost control: the dice are rolling and what happens next is down to luck. The trick is to keep full control and not fall at all. (Especially don’t start the fall in question by being launched into the air by a moving car.)

So although I’m chock full of pain-killing drugs as I write this and utterly desperate to not need to cough or sneeze for a least a week! I’m very aware of the fact that, among other things that happened on Saturday, I got lucky.

In this episode of the Safety & Health Podcast, we are joined by Tanya Jenke, General Manager of Cority Australia, who has recently carried out a study, analysing over half a million occupational injuries in Western Australia between 2003-2019, to find whether economic growth following a period of recession has an impact on workplace injuries.

Behavioural safety & risk management: Dr Tim Marsh’s personal case study 'I was calm, sober and legally compliant so I should have been safe. Indeed, I had been safe about 150,000 times before in similar circumstances … but what I didn’t do was double check an assumption…'
Tim Marsh
SHP - Health and Safety News, Legislation, PPE, CPD and Resources

The challenges that come with introducing site visits

Health and Safety cannot become ‘out of sight, out of mind’ in the hybrid working environment

I call this the ‘Magical armour of assumption’. Where people assume because what they are doing is right, it will keep them safe. “i’m on a walkway that FLT should know i’m there”, “i’m on a zebra crossing, cars should stop for me”, “i’m a cyclist”.

We all get complacent and its a great reminder that sometimes the biggest risk is other people. I imagine that car driver had driven into that area more than once and never seen someone there before.

Hi Simon. Absolutely – though people do cross there all the time as there are popular shops opposite. That said – and do not under any circumstances share this with anyone else – but I’m pretty certain I’ve done it myself a few times! (Though, as with for example driving through a pelican crossing on amber – never when anyone was actually crossing the road).

”assume everyone else is drunk, stupid or both”: interesting foundation to risk management in complex or high risk environments, where effective and safe operations depend on teams and diverse expertise. Surely this ‘assumption’ increases tolerance of poor performance, degrading barriers we cannot control.

Rule of thumb for when out and about on the roads Tom. Especially if on a pedal bike, motorbike or on foot. (From a Pro-active driving course).

The best people have bad days, intelligent people sometimes do stupid things…: I don’t think it matters how you phrase it, or how rigidly you apply it to your team – it still sounds like a pretty good heuristic. Reminds me of my speed awareness course (I know, I know), when one fellow inmate made the point during a discussion about school crossings along the lines of ‘Well surely that’s the kid’s fault, they shouldn’t be in the road. Why is it always the driver who gets the blame?’ Absolutely true – I swear to Richard Dawkins. Get well soon,… Read more »

Thanks Phil. James Reason’s golden rules of human error no 1 is of course ‘even he best prople make mistakes’. Re your fellow delegate (!) we should perhaps swear to Sigmund Freud (he who wrote of rationalisation, denial, projection … and other techniques of mental gymnastics). On the mend (but clearly not quite as bouncy as I used to be).

Hi Tim
Just to say get well soon. If you were here in France it may have been worse as the French seem to have a cavalier approach to such crossings and there are lots of them-perhaps the main reason for their behaviour -habituation indeed.
Regards
Mike

Thanks Mike! Much appreciated. Tim

When teaching my daughter to cross the road at a proper crossing point, at the age she was old enough to understand reason (and therefore one might assume a degree of risk), I changed the lesson away from blind obedient dogmatic rule following (i.e. wait for the green man and then cross the road) to a less obvious strategy of ‘nothing cant hurt you’.  As in if you get to the crossing and there is nothing in sight on the road, and you can see its clear and safe, then cross the road.  If you wait for the green man… Read more »

Sage advice Simon re ‘nothing …’;. (I failed to keep an eye on the ‘something’).

Thank you Tim, and I do hope the aches & pains subside quickly!!

Ouch Tim, I feel for you. Time to work on the tan, around the dressings!

We are getting our people used to the concept of defensive walking … where it is all trying to get you and do you harm. Much like the better known defensive driving.

Keep smiling and don’t laugh too much.

Thanks Bob. I think golden rule no 1 of defensive walking these days is ‘put that bloody phone in your pocket and look up!’ (Just for the record I was looking up – just in the wrong direction 🙁 – and my phone was in my pocket).

Oh no Tim!! Hope you get well soon! Maybe time to work on another book?

Thank you Andrew. Much appreciated. Tim

As a lifelong motorcyclist, the thought “every other road user is out there trying to kill me” needs to be paramount. “Lifesavers” are checks into your blindspot before committing to a manouvre. These things Help to keep you safe, but are not infallible. I try to practice these principals as a pedestrian too, and they do work, but again are not infallible. It is surprising how often pushing a supermarket trolly leads to bumps – if we can’t proceed at walking pace without collisions, it is not surprising that operating a motor vehicle also leads to conflict, but with more… Read more »

Driver behaviour Bob! Now you’ve opened arguably an even bigger can of “risk” worms!
I really like the “assume everyone is drunk, stupid or both” message for self-preservation.
Defensive driving is all about anticipation and specifically always creating enough space around you (in vehicle) to avoid unexpected changes or risky behaviour from other drivers.
Love this debate. More on road safety behaviour!

Yes Colin. If we follow the data (though both exceded by Mental Health issues and dwarfed by pathogen/ exposure health issues) our roads, though relatively safe internationally, are still far more risky than our workplaces.

As chair of the Safer Highways initiative I advocated a ‘be an eco hero and drive green’ approach (with pro-active incentives) as green driving, as wel as saving lots of money and resource, overlaps hugely with safe driving.

Thank you Bob. But as you say any learning isn’t exactly new … !

Hi Tim Hope the healing process is going well. During incident investigations, I cant rememeber how many times i’ve heard “I’ve done this loads of times before, in exactly the same way (Probably about 150,000 times :-)), and this time, something has gone wrong !”. I think its a simple fact of life that sometimes, no matter how well prepared you are, no matter what precations are in place, no matter how astute you are….we simply dont see the unexpected. I dont have any military experience, but in my own thoughts, i often wonder what a battle is really like,… Read more »

Thank you Wayne. I’m pretty certain there’s a military saying / acronym (which I can’t currently remember) that is essentially “the plan was perfect with all contingencies covered… which stood us in good stead right up until first contact with the opposition …”.