Ian joined Informa (formerly UBM) in 2018 as the Editor of SHP. Ian studied journalism at university before spending seven years in online fantasy gaming. Prior to moving to Informa, Ian worked in business to business trade print media, in the automotive sector. He was Online Editor and then moved on to be the Editor of two publications aimed at independent automotive technicians and parts distributors.
January 29, 2019

SHP speaks to Larry Wilson, Founder and Author of SafeStart, about how to change the way you view hazards in the workplace, and in your own time. 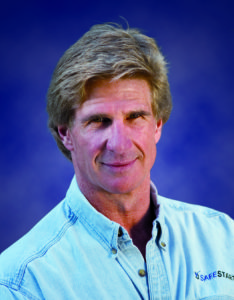 The traditional paradigm in industrial safety is that injuries are caused by hazards and that the hazards need either a hierarchy of controls or engineering controls. As a secondary measure, there are administrative controls, such as set procedures for how to do a job properly. The paradigm therefore is that hazards require protection and from a management point of view, whether it’s an engineering control, an administrative control or a piece of PPE, there is a financial cost to it, even if it’s the supervisory time to ensure that the procedures are being followed.

As a safety professional, if you were asked to inspect a bridge over a motorway, to determine whether it was a hazard or not, what would you look for? Larry suggests, that most would go and inspect the structural integrity of the bridge, find nothing wrong and say it was not a hazard. But he poses that, “if you hit that bridge at 70mph, there is a good chance you could die.” Is a door a hazard? Potentially not, if all the hinges are in place and the door is hung correctly. But, have you ever pinched your fingers in a door? It’s extremely painful!

Most safety professionals understand that if people are moving then things that are not necessarily deemed a hazard can cause injury. Hence the expression, ‘he tripped over his own feet.’ When assessing hazards, most will have a clear understanding of electricity moving or steam moving around a power plant, but do they consider human movement? What keeps the people from moving into something? “Their eyes, their mind,” says Larry. “So, human error is important, which is a tough one, because for years, safety professionals have been told that human error is the result, not the cause, and that they can’t blame the worker because human error is ‘inevitable’, so we need to remove the hazards.”

This can be straight forward if it’s a simple as someone tripping over a wire that was left in a walkway. The wire would be the cause of the trip and whoever left if there would be at fault. The perception is that the worker who doesn’t see the wire is the innocent victim. “But”, Larry posed, “how many wires have you stepped over and avoided, when you were paying attention?”

Humans have the ability to negotiate hazards with their eyes and mind and people are likely to have negotiated thousands each morning on their daily commute to work. So, the first paradigm shift is to recognise that that it isn’t the hazard, it’s hazardous energy. The hazardous energy can move, or people can be moving, and that kinetic energy can cause injury if they run into an immovable object like a wall, or a door, or the motorway bridge. 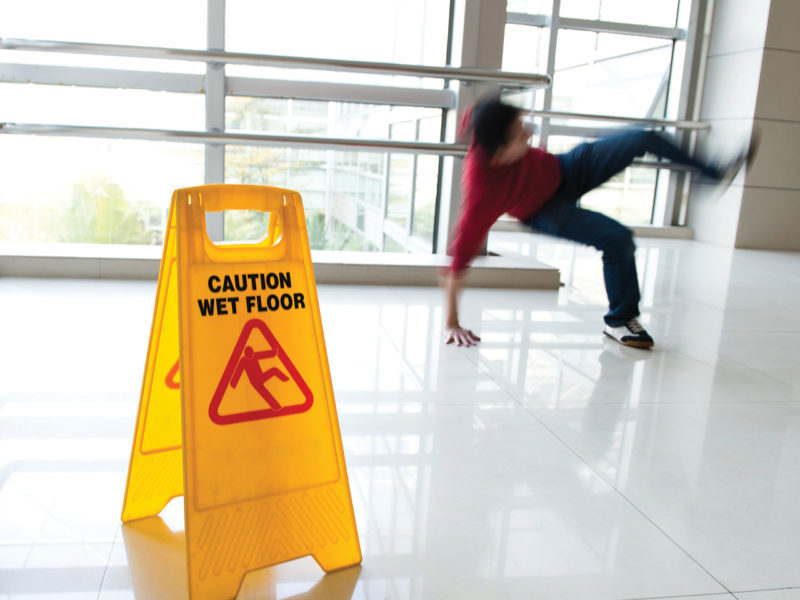 “Once you’ve accepted this paradigm shift,” Larry continued, “that it’s hazardous energy that causes injury, it’s easy to see how human error can cause injury.” However, these injuries, or a stubbed toe, or bumping your car a car park are statistically pretty rare. So, what causes people to make these errors?

Unfortunately, this information in isolation is not particularly useful because it’s not quite as simple as just telling people not to make these four mistakes – people are not trying to make mistakes or injure themselves. You need to look into what causes people to make mistakes, which is much easier for people to identify with. These causes, or daily reality ‘states’ are:

There are others, such as panic, extreme joy and extreme sorrow, but they are not regular occurrences. There is also being drunk, “but that is an entirely preventable state”.

Mind not on task

Tackling complacency, or becoming overly familiar with certain things, will lead to mind not on task. This isn’t a character flaw, it simply the way the human brain is hard-wired. When you’re 17 and just learning how to drive, you have the fear and so are fully concentrated. You don’t make a conscious discussion for your mind going away from what you are, thinking you’ve mastered a skill, it happens without your permission. Over time, that familiarity will make you feel more comfortable going at a faster speed, or changing the channel on the radio, talking to a passenger, all of which will lead to mind not on task.

Larry used another example of first entering a swimming pool and immediately smelling the strong chlorine. After 45 minutes in the pool, you don’t smell it anymore, but the chlorine hasn’t gone away. It’s down to a small part of the brain called the reticular activating system, a diffuse network of nerve pathways in the brainstem connecting the spinal cord, cerebrum, and cerebellum, and mediating the overall level of consciousness.

It’s this, said Larry, which managers often find so hard to understand. They might not be able to believe that a worker could possibly get complacent when dealing with 13,000 Volts of electricity. But the worker didn’t choose to get complacent, it happened unconsciously.

Complacency – How awareness changes with time 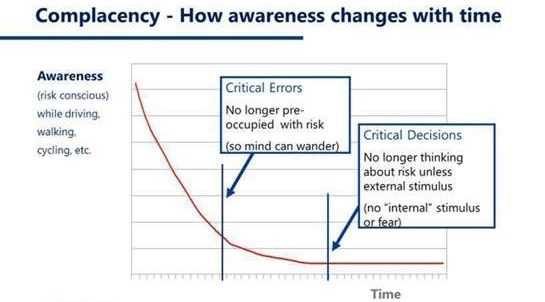 This level complacency can then, over time, start to affect your decision making. The first stage of complacency is where the fear or skill is no longer pre-occupying and your mind can wonder. At this stage you become particularly susceptible to rushing, frustration or fatigue. That’s the first critical error made, your mind is now off task.

“Safety professionals have got to let go of some of the more traditional paradigms they were taught (it’s all about controlling hazards) and consider the real world for what it is. People move. That kinetic energy can cause injuries, severe injuries and fatalities. In almost all cases the only thing controlling that potentially hazardous energy is someone’s eyes and/or mind, which is why human error is important.

“People don’t make mistakes all the time, but the likelihood that they will make a mistake increases if they are rushing, frustrated, fatigued and complacent or a combination of theses states. So, it’s not just about the hazards, it’s really about hazardous energy and human error.”

Larry will be speaking at Safety & Health Expo in June 2019 alongside former ski jumper Eddie the Eagle.

Eddie made the world headlines by representing Great Britain in the 70m and 90m ski jumping at the 1988 Calgary Olympics. He was also the British ski jumping record holder and, after retiring from ski jumping, Eddie went on to become ninth in the world amateur speed skiing, and a stunt jumping world record holder for jumping over six buses.

There is always the risk of failing when you’re trying something new. And in the case of Eddie, his ambitions also put him at risk of severe injury. Not landing the 90-meter jump at the Calgary Winter Olympics could have had terrible consequences. But actually, his most serious injury was caused by something completely different.

The pair will talk about Eddie’s career, his most serious injury and his perspective on risk. The session will bring new insights into courage and risk with engagement, humour and a touch of seriousness.

Catch Eddie and Larry in the Keynote Theatre at 11:30am on Wednesday 19 June.

Hazards vs hazardous energy, what causes injury? SHP speaks to Larry Wilson, Founder and Author of SafeStart, about how to change the way you view hazards in the workplace, and in your own time.
Ian Hart
SHP - Health and Safety News, Legislation, PPE, CPD and Resources

I understand what he’s trying to say here, but don’t agree with it.

If you hit the bridge at 70mph, the hazard is probably the fact you’re flying through the air with, presumably, your red cape pulled over your eyes hindering your vision. Not the bridge.

Simple’ss whether fatigue linked to presenteeism or basic human resistance to sustaining the ‘perceived effort’ of remaining alert, with hazard antenna switched on permanently in the background as the norm, the potential for being at risk of self-harming by carrying-on regardless in the mindset that someone else has taken care of that……..