On the morning of 5 October 1999, two trains travelling at a combined speed of 130mph collided, causing the death of 31 passengers, at Ladbroke Grove just outside Paddington Station in London. 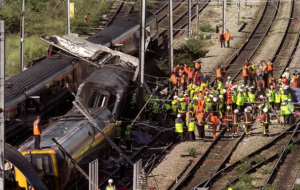 To mark the anniversary, 32 candles were lit for each of the passengers that died, and one more for those that survived the crash, followed by a one minute silence.

But, have we learned anything from the crash and have safety standards on the railway improved? The incident happened when one of the drivers missed a red signal, hitting the oncoming train head-on, causing a huge fireball. As well as the 31 fatalities, 417 people were injured, partly due to a huge fireball in the aftermath.

Jonathan Duckworth, Chair of the Paddington Survivors Group, told the BBC that he fears that standards may be dropping. The number of Signals Passed at Danger (Spads) during the decade after the crash more than halved, from 593 to 273.

However, the number is on the rise again. In July this year, there were 41 Spads, more than one a day, the highest number in a single calendar month for 12 years. Minor accidents have also increased and three rail workers have been killed by trains in the last year

Mr Duckworth said: “Our crash, and others, happened because they took their eyes off safety. If they do that again more will be killed and more lives devastated.”

Rail Minister Chris Heaton-Harris said that The UK has “one of the safest railway networks in Europe.”

“We are continually learning how to make our railways safer, that is the legacy of a terrible disaster such as this,” he added.

“But disasters could happen any time. That is why one of my many jobs is to ensure we have safety hardwired into every decision that they make.”

The Ladbroke Grove Rail Inquiry, written by Lord Cullen and published by the Health and Safety Executive, scrutinised Railtrack, the company responsible for maintaining British railway at the time, for numerous safety breeches including:

Five years before the collision, Railtrack was warned that drivers misinterpreted signals at least seven times, but no adequate action was taken by the company, according to Blackfriars Crown Court. Consequently, Railtrack was liable for a “catalogue of failures” that led to the crash.

Phil Chambers BSc, CMIOSH Strategic Safety Systems Ltd, used the Paddington Rail Crash as a case study to the Heinrich’s Triangle to describe how, if you have enough safety breaches, it will eventually lead to serious injury.

Lord Cullen described the safety culture at Thames Trains, one of the franchise firms involved in the crash, as “less than adequate”. It was reported that the crash could have been prevented had there been a train protection in place.

Download Now
Paddington rail crash 20 years on: Are safety standards slipping? On the morning of 5 October 1999, two trains traveling at 130mph collided and crashed into each other, causing the death of 31 passengers at Ladbroke Grove.
Samah Ahmed
SHP - Health and Safety News, Legislation, PPE, CPD and Resources