Phil Chambers BSc, CMIOSH Strategic Safety Systems Ltd
Read the first part of this article – Probability: applying the triangle
For another real example of how probabilities combine to create an incident, I’ll take the Paddington rail crash.  This was caused by a train outbound from Paddington going through a red signal (SN 109) and colliding with the inbound train. 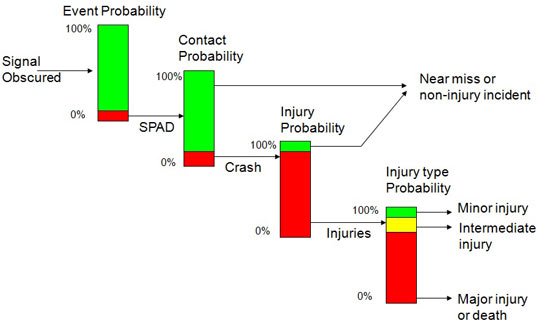 If the signal is obscured or badly sited, as was the case here, then there is a probability that a driver will miss the red signal. Technically, this is called a Signal Passed At Danger (SPAD). There had been 8 SPADs at SN 109 in eight years.  I don’t know how many trains had stopped when it was red over that interval, but dividing 8 by that number would show the probability of it happening.
Once a SPAD occurs, there is the probability of a train coming the other way. This is a high probability as the signal would have been set at red because of just this, and it is only the safety margin which makes it not 100%. As the crash happened on the 9th SPAD, the probability is of the order of 1/9, ie 11%.  I apologise for the crude statistics in both these calculations, but you get the idea.
With a train crash, the probability of injury is very high, and the probability of those injuries being fatal is again very high.
This is a simplification of the Paddington crash, and there were other contributory factors such as driver training.  However, it does illustrate how this model works.
A common failing in so many accidents is to fail to take action until injury or death occurs, but consideration of this model shows the wisdom of reacting to upstream indicators.
What this model should lead us to do is:
All action management systems should have the ability to record whether something was a hazard, a near miss or an accident and to provide counts of these for management information.  Just recording accidents is not good enough.  Good safety control is where you have a high count of hazard corrections, a lower count of near misses and a very low count of accidents.
While you may not make formal calculations of probability, I suggest that considering them will derive major benefits in your risk assessment, near miss and accident management programmes.

Fascinating, to someone who had later contact (regarding running a food business operation) from a passenger on the train, who in a few fractions of a second came to achieve the status of double amputee. How bad does it get?

Would the Author venture to assign any numerical value to the likelihood of injury to a passenger leaving Paddington, or is it infinitessimally small?(yet still tragic and avoidable?)

Could it be applied to human errors and if yes, would it make any differences?