Dr Tim Marsh PhD, MSc, CFIOSH, CPsychol, SFIIRSM is MD of Anker and Marsh. Visiting Professor at Plymouth University he is considered a world authority on the subject of behavioural safety, safety leadership and organisational culture. As well as many of the world's most recognisable industrial names Tim has worked with diverse organisations such as the European Space Agency, the BBC, Sky TV, the RNLI and the National Theatre in his 25 year plus consultancy career. He has key noted and chaired dozens of conferences around the world including the closing key note at the Campbell Institutes inaugural International Thoughts Leaders event in 2014. He has written several best-selling books including Affective Safety Management, Talking Safety, Total Safety Culture, the Definitive Guide to Behavioural Safety and Organised Wellbeing. Previously he led Manchester Universities ground-breaking research team into behavioural safety methodologies in the 1990s.
June 4, 2018

A simple strategy for mental health 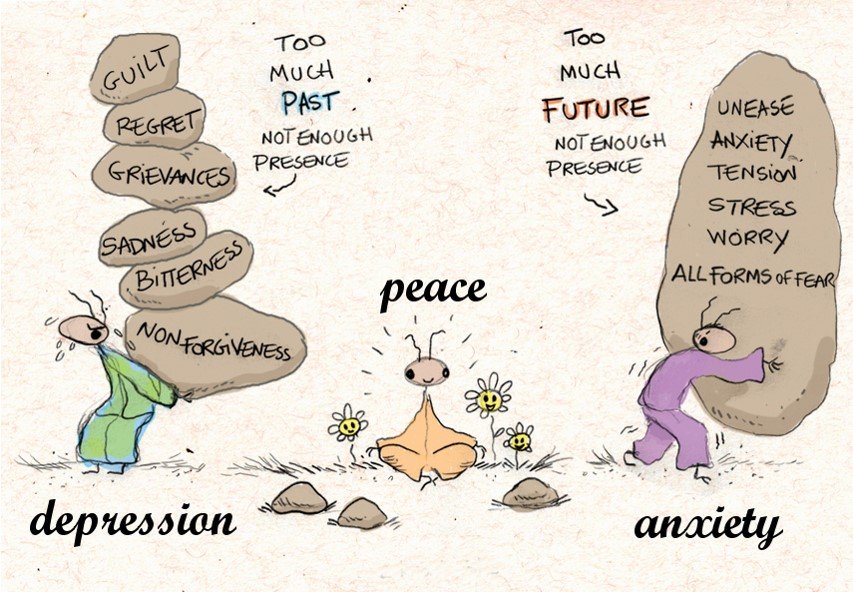 A version of this cartoon was originally published by British Safety Council.

Whilst a small percentage of mental health (MH) issues in the areas of psychosis, schizophrenia and other serious (often organic) illnesses do not fit the model in the cartoon above, the majority do – being to do with either depression or anxiety. There’s a cyclical link of course as we can, for example, be anxious that something will go wrong again and quite reasonably rather depressed about that prospect.

In both cases, as the cartoon above suggests, the solution is fewer thoughts about the past or future and more ‘in the present’ thinking needed.

You’ll recognise a reference to the increasingly popular concept of ‘mindfulness’, but this simplicity is also why cognitive behavior therapy (CBT) is so useful. Through a logical deconstruction of our emotions, CBT points us at thoughts like ‘every minute spent wishing things that have already happened hadn’t happened is a minute wasted’ or ‘every minute spent worrying that something will happen steals a minute from efforts to ensure that it doesn’t’.

Applying such self-evident logic isn’t always easy, and is sometimes impossible, but it’s a very good place to start.

Identifying and helping those finding things difficult to impossible

We all spend time thinking unproductive thoughts – it’s just a question of degree. Spotting people on the cusp of a ‘struggling to cope’ tipping point is key

Ask ‘are you alright?’ and spend half a second considering the answer and you’ll accept that ‘yes fine’ on the nod, but spend five seconds considering the answer and as often as not you’ll realise the actual answer is ‘not really’. This is especially important for men who tend to respond to requests after their health with ‘I’m fine’, ‘it’s nothing’ (merely a flesh-wound to quote the famous Python scene) and eventually ‘I’m so sorry to trouble you but I may need some help here’ as they stand in front of a doctor carrying one of their arms under the remaining one. (In his recent best-selling book ‘Rules for Life’ the writer Jordan Peterson suggests that over millions of years men in particular have learnt that the one thing they mustn’t be perceived as in a group is a ‘passenger’. We really need to discard these hunter/warrior instincts best we can).

Increasingly, as most readers will know, organisations are training teams of mental health first aiders to start conversations, to help to pro-actively build a supportive culture and to spot people who are at risk of tipping off the edge and to refer them to support. Bloody right too. Statistics show they are needed about 35 times more than the traditional health & safety variety with working people committing suicide at that ratio compared with accidental deaths in work.

Some cynics suggest that the label ‘MH issue’ is just a con perpetrated by big pharma and the psychiatry industry (and there is a lot of truth in that) but we know all about the Heinrich principle and just look at the supposedly pointy end of the triangle! So, whatever labels we use, the base of the triangle must be just enormous. And that’s everything from “you, but on a bad day” through to hanging on by your fingertips.

MH first aid is the first strand to the simple two-pronged strategy. The second is to have a holistic, integrated approach to resilience building to try and keep people in the middle of the cartoon. With individuals this means positive thinking and resilience skills but also reflecting the approach:

But that’s a separate article.

At a recent presentation to a management team in London I used this cartoon-based slide outline that two-pronged holistic mental health and wellbeing strategy. (Whilst the cartoon may look simple, even glib, to the point of insulting to anyone with ‘lived experience’ it does very often seem to set the right tone).

In the audience on this day a senior manager put his hand up and explained that, though no one in attendance knew, he’d been off work for the last two weeks with anxiety and had been “really shaky” before the meeting knowing it was likely to be raised as a topic. However, he said that discussing mental health in this way – as an inevitable sustainability/resource risk issue requiring a basic strategy and on-going tactics as any other would – helped him feel empowered to speak up.

So he did speak up – and very open and moving it was too. At the end the CEO stood up, thanked him for his honesty and bravery and led a round of applause. This wasn’t an isolated incident as conferences and working parties are increasingly addressing the issue proactively. For example, in May 2018 I chaired the highly successful and well attended Safer Highways event in Manchester. In attendance, Clare Forshaw Head of Health at the HSE reported herself ‘elated’ that MH was the theme for 2018.

It’s Not Going to Go Away

More and more books are being published warning that social media is driving emotional isolation and that we are facing the ‘end of days’. Over stated or not in the last few years we have reached a tipping point with the next generation heading for work struggling more than any other ever has. More students now kill themselves than people are killed at work and more school children kill themselves than people killed at work. Even with a basic business focus it’s a huge risk management issue heading straight for UK plc.

In short, MH has been a largely ignored elephant in the room for years but it’s time has clearly come. With mental health services in the UK barely fit for purpose (if that) and likely to be under even more financial pressure if Brexit goes badly it’s just a major sustainability issue for industry. It has to be a key item on the risk register for all organisations with all the governance issues that flow from that.

Prof Andrew Hopkins led the ‘mindful safety’ approach that stressed that while all organisations have things going wrong on a daily basis, weak organisations wait for the problem to find them whereas the best go out pro-actively to find the problem. In exactly the same way, a mindful approach to mental health needs to be driven not just by the SHE and Occupational Health departments but in line with an integrated and holistic strategy.

It’s not just about the small percentage who pick up the phone to Occ Health or EA. The bigger question is: what are we doing about the 15-25% who are struggling? And what are we doing, proactively, to keep our 75-85% of employees currently in the middle of the cartoon away from the edges?

My experience in London was, for me, an excellent example of the start of a sea change in the way we talk about and address the issue. It was so much better than the traditional ‘head in the sand, hope for the best’ approach. I found myself standing back and thinking ‘hello…’ and that perhaps a nice user-friendly cartoon is just a better place to start than pie charts, graphs and millions of years of ‘I’m fine thank you’?

What a great insightful article. I have been thinking also about the link between depression and temptation. In essence if we are depressed we are more likely to seek some kind of risk taking temptation to eliminate this. Therefore could more workers be tempted to take a risk at work because it leads to praise/financial reward which then boosts the mood until the next time?

Thank you Phillip. I agree that so much of behaviour is inter-related and complex. Everything from comfort eating and self medicating through to the unhappy worker who hurts themselves and challenges (their boss, the world generally?) : “there, are you satisfied now”?!