Rana Plaza collapse: Nine years on, what does the future of workwear production look like?

On 24 April 2013, the eight-story Rana Plaza building collapsed in Bangladesh, killing 1,134 people in what is considered the deadliest non-deliberate structural failure accident in modern human history. 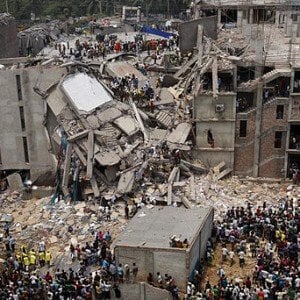 Over 3,000 workers were inside when the eight-storey building collapse and, after nearly three weeks of searching for victims, the final death toll stood at 1,129.

Funds were set up to provide medical and financial support to victims and their families, with Primark setting aside £5.4 million in compensation, in 2014.

For more than two years after the disaster, the victims and their families were still awaiting compensation.

In 2015, authorities in Bangladesh filed murder charges against dozens of people for their roles in the collapse of the building.

In the years since, positive steps have been taken to improve safety and health in fashion industry supply chains but there is still room for improvement.

A three-year project was set up in 2016 to raise awareness of safety and health among more than 6,000 workers in Bangladesh’s factories and the communities that surround them. 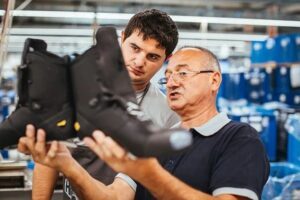 Simon Ash, UK Sales Manager, at HAIX looks at the industry’s progress since the collapse and shares the importance of fair and safe working conditions, what it means to be a ‘Made in Europe’ manufacturer, the loopholes in European regulations, and what the future of workwear production looks like.

“As the world calls for greater supply chain transparency, it may matter more than ever before. Tragedies such as the Rana Plaza disaster leading to the Bangladesh Accord, the 2018 Transition Accord and the RMG Sustainability Council, offer a grave reminder that businesses need to know where and how their corporate workwear is sourced, manufactured, transported and stored.

“HAIX made a corporate responsibility promise over seventy years ago focussed on ‘Made in Europe’ manufacturing, which encompasses fair and safe working conditions, sustainable practices and modern testing facilities. The ‘Made in Europe’ label was created to demonstrate that a product was manufactured following European regulations, making products safer and less damaging to the environment.

“However, European regulations can be lax and repeatedly allow for loopholes. For example, if the upper and sole of a shoe are put together in an EU member state, the shoe is allowed to bear the ‘Made in Europe’ label – regardless of whether the two components were originally manufactured in Asia or Africa. Looking for the label is one thing, but businesses still need to ask questions, for example, where different product parts are manufactured and put together.

“Although European manufacturing is frequently associated with higher costs, HAIX chooses Europe because regulations protect worker rights and ensure a certain level of environmental and social consideration. For example, leather tanneries in certain parts of the world use toxic chemicals and dyes that place workers at risk of cancer, eczema, blindness and asthma and put the environment at risk of pollution should these harmful substances transfer to water waste.

“Looking to the future, both suppliers and buyers will need to demonstrate ethical practices to ensure products are being manufactured in a responsible and sustainable way, that the workers involved are treated fairly and safely, and environmental and social impacts have been considered. It will be no longer be a ‘nice to have’ but a necessity as a businesses’ employees, customers and other stakeholders demand action against issues such as climate change, modern slavery and achieving a circular economy.”

Rana Plaza collapse: Nine years on, what does the future of workwear production look like? On 24 April 2013, the Rana Plaza building collapsed in Bangladesh, killing 1,134 people. What have we learnt since?
Safety & Health Practitioner
SHP - Health and Safety News, Legislation, PPE, CPD and Resources