PUWER: Provision and Use of Work Equipment Regulations

Provision and Use of Work Equipment Regulations (PUWER) came into force on 5 December 1998 and was formerly known as PUWER98.

The main objective of PUWER is to ensure the provision of safe work equipment throughout the lifetime of its use, regardless of its condition, age or origin.

The regulations require that machinery provided for use at work is:

PUWER is comprised of 37 regulations and is split into 6 parts; within this article we will explore Part 2 – Regulation 18 Control Systems in detail, covering the changes made to the ACOP in November 2014 and how it can be applied.

This regulation states that every employer shall ensure, so far as is reasonably practicable, that all control systems of work equipment are safe, and are chosen making due allowance for the failures, faults and constraints to be expected in the planned circumstances of use. Failure of any part of the control system or its power supply should lead to a ‘fail-safe’ condition. Fail-safe can be more correctly and realistically called ‘minimised failure to danger’ where the minimisation can actually be quantified as a “probability of dangerous failure per hour”, or PFH.

This should not impede the operation of the ‘stop’ or ‘emergency stop’ controls. The greater the risk, the more resistant the control system should be to the effects of failure. Bringing a machine to a safe halt may achieve the objective. Halting a chemical process, however, could create further hazards. Care should be taken to fully assess the consequences of such events and provide further protection, for example standby power plant or diverting chemicals to a place of safety. It should always be possible to recover to a safe condition.

Regulation 18 mentions the standards BS EN 60204-1, BS EN ISO 13849-131 BS EN 62061 which provide guidance on design of control systems so as to achieve high levels of performance related to safety. Importantly, though they are aimed at new machinery, they may be used as guidance for existing work equipment as “state of the art” guidance.

What is new here is the fact that both functional safety standard BS EN ISO 13849-1 (first published in 2006) and BS EN 62061 (first published in 2005) are now available; at the time that the previous version of PUWER in 1998 was released, both standards were only in preparation. EN 60204-1 was already around in 1998. So what are these standards and when would you apply them?

BS EN 60204-1 is a standard harmonised to the Machinery Directive and the Low Voltage directive, and is titled: “Safety of machinery. Electrical equipment of machines. General requirements”. It is intended to cover the electrical safety aspects of machines. This includes safety requirements for electrical, electronic and computer controlled equipment and systems for machines. It gives specific instructions for the safe maintenance of the point where electrical or electronic equipment connects to the machine i.e. at the main machine isolator connecting the machine to the electrical supply; it refers to machinery that operates with nominal supply voltages below 1,000Vac or 1,500Vdc, or with nominal supply frequencies below 200 Hz.

When it comes to the safety related controls on machines (systems containing safety relays/controllers, interlocked guards, two hand controllers, safety mats, light curtains, emergency stops and the like) there is choice between BS EN ISO 13849-1 (with part 2 for validation) and BS EN 62061. Which you use will depend upon the application.

BS EN ISO 13849-1 is harmonised to the Machinery Directive, and is titled: “Safety of machinery. Safety-related parts of control systems. General principles for design”. It provides safety requirements and guidance on the principles for the design and integration of safety-related parts of control systems (SRP/CS), including the design of software. It was developed as the direct replacement for its predecessor EN 954-1 (with its attendant categories B, 1, 2, 3 and 4 for SRP/CS). For these parts of SRP/CS, it specifies characteristics that include the Performance Level (PL a – e) required for carrying out safety functions.

The PL is based upon not only the old categories of EN 954-1 but also parameters including Diagnostic Coverage (DC), failure rates expressed at Mean Time to Dangerous Failure (MTTFd) and steps taken to reduce Common Cause Failures (CCF). These four factor combine via look up tables (such as one found in Annex K1 of the standard) to form a Probability of Dangerous Failure per Hour (PFH), the order of magnitude of which corresponds to a particular Performance Level (e.g. 10-7 – 10-8 = PL e). It applies to SRP/CS, regardless of the type of technology and energy used (electrical, hydraulic, pneumatic, mechanical, etc.), for all kinds of machinery. It is recommended that EN ISO 13849-1 is used primarily for the design of low complexity SRP/CS.

BS EN 62061 (also harmonised to the Machinery Directive) is titled: “Safety of machinery. Functional safety of safety-related electrical, electronic and programmable electronic control systems”. It gives best-practice recommendations for the design, integration and validation of safety related electronic control equipment for machines – just like EN ISO 13849-1/-2. Rather than specifying Performance Levels it specifies a range of Safety Integrity Levels (SIL 1 – 3) for carrying out safety functions.

The SIL for a safety related control function comprises the architecture (A, C, B, D which are almost equivalent to categories 1,2,3 and 4 of BS EN ISO 138491), Hardware Fault Tolerance (HFT), Safe Failure Fraction (SFF), Diagnostic Coverage (DC) , steps taken against Common Cause Failure (CCF and a beta-factor), test intervals (T1 and T2) and failure rates (expressed as lambda); when these factors are combined in specific equations the result is a Probability of Dangerous Failure per Hour (PFH) the order of which correlates with a particular SIL (e.g. 10-7 – 10-8 = SIL 3). It applies to the safety related control functions (SRCF) which are electrical, electronic and programmable electronic only – it can not be applied to non-electrical/electronic systems, and this is perhaps the key difference in scope between EN ISO 13849-1 and EN 62061.

The term SIL actually comes from a much broader functional safety standard BS EN 61508 which describes in detail the entire lifecycle for managing safety related controls from cradle to grave of any system be it a device, software tool, a petrochemical plant, rail traffic management system and so on; it is so big that sectorial versions exist for particular branches of industry. BS EN 62061 is such a sectorial version.Other sectorial versions include BS EN 61511 for industrial processes (e.g. petrochemical plants) or EN 61513 for nuclear. Hence, in these particular sectors (and others which use SIL), from a Functional Safety Management point of view, it may be attractive to use EN 62061 for machines

So the reasons for using EN ISO 13849 include the ease of migration from EN 954-1 and its applicability to all systems regardless of source of energy, especially where they’re not complex.

EN 62061 is a more rigorous standard, it lends itself to more complex applications (as long as they do not include non-electrical sources of energy), and it may appeal to those already using SIL-rated systems (for example in the process industries) who are familiar with the BS EN 61508 lifecycle.

Work is currently in hand within a standards working group to merge these two functional safety standards into a definitive single standard within the next few years.

Understanding the basics of machinery guarding

Employers have legal obligations under:

Due to the risks associated with operating machinery, the courts place a higher duty of care on employers. If there is a risk of foreseeable injury, has the employer taken reasonable steps to minimise and/or reduce the risk of injury? Such reasonable steps are considered in the hierarchy of machinery guarding.

The hierarchy of machinery guarding

In order to decide on the most appropriate guarding for different parts of the machine, it is essential to undertake and document a formal risk assessment to establish risk.

A machinery risk assessment will typically involve identifying significant hazards and for each one, evaluating the likelihood of occurrence, frequency of exposure, degree of possible harm and number of persons at risk. Having identified which risks need to be reduced, suitable safeguards can be considered. It is then essential that the risks are reviewed to establish whether controls have, indeed, sufficiently reduced the risks.

Your control strategy should follow the Hierarchy of Machinery Guarding as follows:

Fixed guards should remain in place at all times, except when they need to be removed by authorised and competent persons for the purpose of maintenance. Interlocked guards and devices such as pressure-sensitive mats and safety light curtains should be considered where fixed guards would not be practicable because they would hinder normal operation of the machine.

It’s worth noting that just because machinery carries the CE mark, this is no indication that the machine is safe or compliant with UK regulations. Employers must carry out a thorough risk assessment.

Effective health and safety is usually delivered by an integrated package of measures that take account of the hardware (guarding), the systems (for intervention, such as lock off and isolation) and the human factors (understanding what goes on and how to maximise compliance). These measures are interdependent and should be treated as such in the assessment and management of risk.

Provision and Use of Work Equipment Regulation articles A manufacturing company has been fined after an employee’s arm was dragged into a press roller. Companies purchasing or hiring used forklift trucks are being urged to make sure that they see a valid Thorough Examination Report for every machine they bring on site, says the body behind the UK national standard. A manufacturer of swimming pool covers has been fined after a worker suffered a degloving injury when his hand got caught between two power driven rollers of an extruder machine. £50k fine for manufacturer after employee has fingers amputated

A manufacturer of prepared bird feed has been prosecuted after an employee suffered life changing injuries when his hand was trapped in an unguarded rotary valve. Entanglement risk was ignored by company

An electromagnetic brake manufacturing company has been fined after a worker suffered serious injuries to her arm and hand when she became entangled in a spindle drilling machine. A granite worktop manufacturer has been fined after failing to ensure that lifting equipment was examined and maintained to ensure it was safe to use. A joinery company has been fined after two separate incidents that led to workers’ fingers being amputated. 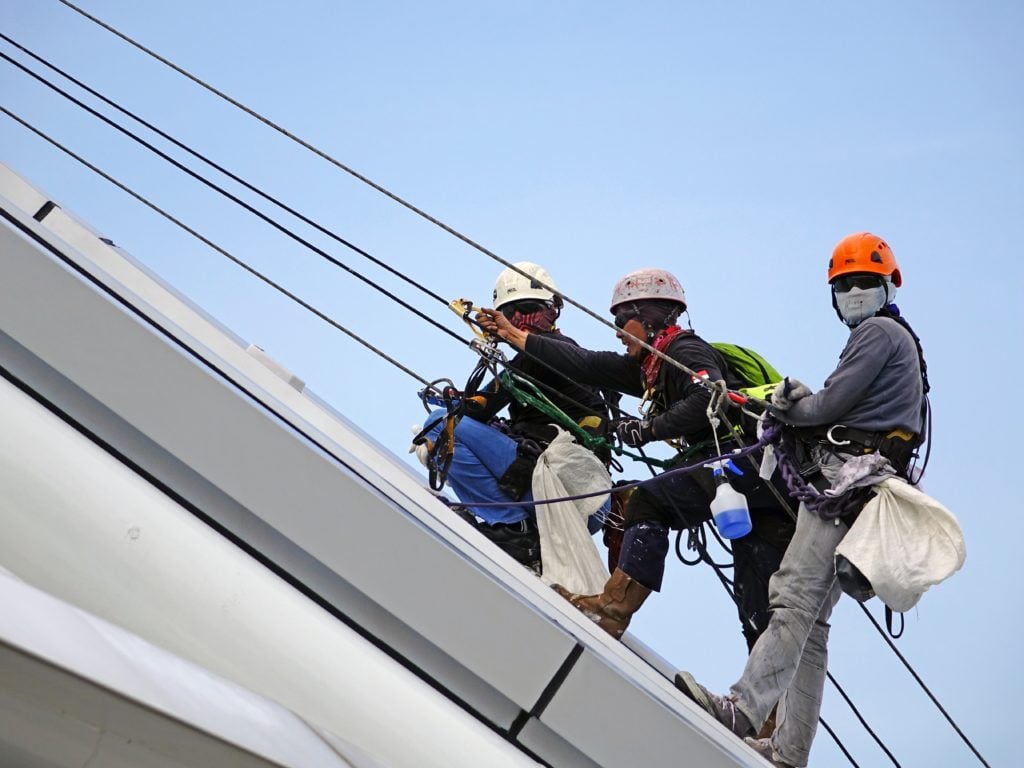 Falls from height is a major killer of workers in key sectors including construction and agriculture, and the figures show no sign of improvement, as Ken Diable, Managing Director at Heightsafe, explains. A concrete wall blocks company has been sentenced after a worker’s hand was crushed in an unguarded machine. Theme park operator M & D (Leisure) Limited has been fined after nine passengers were injured and taken to hospital when a train on one of their roller coasters derailed and crashed to the ground.