Jamie Hailstone is a freelance journalist and author, who has also contributed to numerous national business titles including Utility Week, the Municipal Journal, Environment Journal and consumer titles such as Classic Rock.
June 19, 2019

The advent of the ISO 45001 global standard for occupational health and safety management has led to new organisations coming forward to apply for certification, according to the British Safety Council. 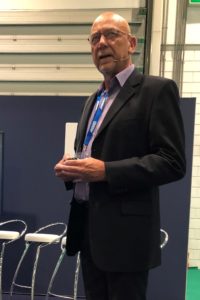 Speaking at Safety & Health Expo 2019 in London, the British Safety Council’s Lead Auditor, Kevin Evenett said it has now taken 50 organisations from the previous OHSAS 18001 standard, after the new certification was introduced in March 2018.

ISO 45001 is the world’s first international standard for occupational health and safety and organisations were given three years from last March to migrate over to the regime.

Mr Evenett said in many cases it was a “natural progression” for organisations migrating to the new standard.

“When it comes to occupational health and safety management, a significant number of clauses are very similar to previous standards,” he told the event.

“But it is an improvement and a higher standard. There’s no question that organisations have to move forward to become certificated, but it’s progression rather than a radical change.”

He also added “quite a few new organisations” have come through to do ISO 45001, which were not certificated previously.

“They have seen the new standard been issued and it has attracted more people to take it up as a health and safety standard.”

Reiterating comments made by BSI principal consultant Quentin Dunstan earlier in the day, Mr Evenett said the involvement of senior management and leadership was one of the main changes in the new standard.

“All of the sudden, they have to become more involved,” he told delegates. “Managing directors suddenly have to get involved and not just pay lip service.”

He said the real challenge for most organisations with the new standard is the stipulation that top management must demonstrate leadership and commitment.

“They have to ensure integration of health and safety requirements into business processes,” he explained. As an auditor, I have to say have you done this? They need to be able to give us an answer. We will talk to the senior managers when we carry out audits. I’m not sure it always happened under OHSAS 18001, but it’s something we insist on now. We must see the top managers and talk to them about these issues.

“If they say what is a safety culture, then they are on a loser right from the start. They need to be able to demonstrate that they understand this stuff,” he added.

Mr Evenett said another big different between the previous standard and the new definition is an emphasis on worker participation.

“They should be informed about what is happening in terms of health and safety in their organisation. We expect them to attend or chair safety committee meetings. We expect to know what is going on.”

Five-Star Audit, Sword of Honour and Globe of Honour Awards, How does it work?

‘Natural progression’ for organisations migrating to ISO 45001, says British Safety Council The advent of the ISO 45001 global standard for occupational health and safety management has led to new organisations coming forward to apply for certification, according to the British Safety Council.
Jamie Hailstone
SHP - Health and Safety News, Legislation, PPE, CPD and Resources

Does your health and safety management system meet the requirements of ISO 45001?