New research has shown fines from the Health and Safety Executive (HSE) have increased 74% in a year with local authority fines rising by a staggering 1,870%.

The report from global law firm Clyde & Co was taken from data obtained directly from the HSE and more than 300 local authorities. It shows a total value of fines increased to £73.2m in the first year of the new guidelines (year to 31 January 2017). This was against a sum of £35.4m in the previous 12 months.

Head of compliance and strategic support in Clyde & Co’s safety, health and environment team, Rhian Greaves, said the new sentencing guidelines had made health and safety a ‘top priority for the boardroom’.

“Our research confirms what we have been seeing in practice – the new sentencing guidelines are biting hard,” she said.

“Good health and safety management is morally right. It also makes good business sense. When the potential reputational damage is added to the cost of the fine, it’s clear that health and safety failures are now a major business risks.” 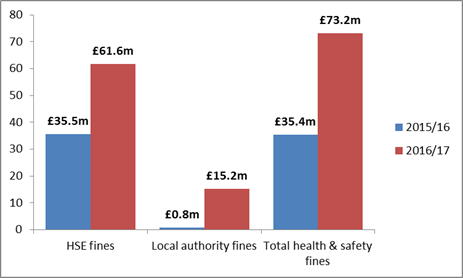 The study revealed manufacturing and construction sectors  paid the most in fines as a result of health and safety breaches. The amount of fines increased to £13m from £7m – an increase of 83%.

Construction represented 21% of the total collected fines from the HSE this year. The highest fine imposed on the sector was £2.6m, ordered to be paid by Balfour Beatty.

More fines have exceeded £1m this year than in the previous 15 years combined. 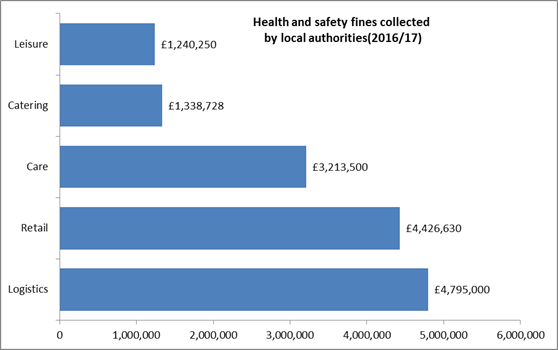 Greaves described the local authority increase as ‘staggering’ – and said it ‘reinforced the dramatic effect the new sentencing regime is having on defendant organisations’.

The logistics sector has been hit the hardest by enforcement in the first year of the new guidelines. Warehousing organisations have paid out six times as much as the total figure for all local authority cases in the previous year.

Greaves said the large number of risks at distribution centres places them at the top of the local authorities’ agendas, and it was ‘arguably the highest risk industry within their jurisdiction’.

She said: “The logistics sector represents the most challenging risk for the local authority to manage. The public’s growing preference for internet shopping has seen huge distribution centres spring up nationwide. With high level racking, mechanical handling equipment and large numbers of employees, agency and gig economy workers, the area presents something of a perfect storm. ”

Silly me, of course, it has to be this way around when peddling austerity as, for sure, they will want to make money out of running a nudge campaign when few employers are going to actively volunteer for a fundamental change of mind-set or ethos in their management or governance. Maintaining the status quo regardless of accepting the under the line costs of poor performance, productivity, presenteeism and Occupational Health preferable to “change”. The old “hair-shirt” principle of ‘it doesn’t matter how uncomfortable it’s familiar’ and same old, same ole mediocrity. I knew the Hour-Glass Economy was going to see… Read more »