Event organiser Aoife Devaney, Assistant Health and Safety Advisor at St George and Charles Klonaris, Senior Sales Project Manager at St George, began the morning with a presentation on the history of London Dock, followed by guest speakers, Danny Byng and Wayne Jeves from Hughes and Salvidge, who gave insight on the demolition industry. 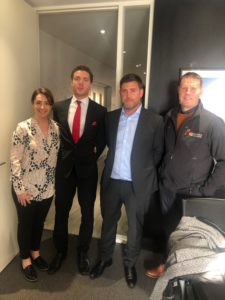 To run through the aspects of London Dock, Aoife explained that by the late 18th century London had become one of the biggest and busiest ports in the world, with bustling maritime industry limited to quays and wharves along the river. Records show that it could take up to two months for a ship to unload its cargo.

Aoife further explained that London Dock was created and established by a group of merchants, shippers and bankers in January 1796, to have a more secure and enclosed docks. It was estimated that London Docks was able to accommodate up to 500 ships and store over 200,000 tons of goods. The huge rise in capacity led to the creation of the first ever police force, in 1798, due to the increasing theft on ships.

Charles then explained in 1986, Rupert Murdoch opened the News International Headquarters at London Dock. Riots were caused by previous workers that had lost their jobs at London Dock. The plant was built with razor wire and prison-like security.

Dan Byng, Demolition Manager and Wayne Jeves Project Manager at Hughes and Salvidge explain the general misconceptions of the demolition sector and give insights on how the company deal with health and safety on sight.

According to Wayne, demolition is perceived to be the easiest method in the construction industry, as the common perception is that knocking down is easier than building up. But in fact, “demolition is a specialist, intricate highly skilled sector of the construction industry where the slightest oversight or mistake can cost lives or damage the environment,” he said. 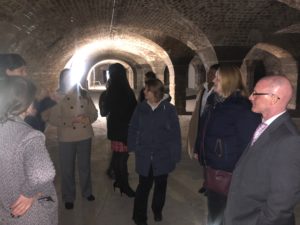 They believe that these misconceptions may have come from the media as Wayne explained that the demolition sector has an interface with the public, because if something goes wrong then it will be filmed and “will paint the demolition industry in a poor image”.

The demolition project at St George was for a four-storey office at the duration was 12 weeks. The project included soft-strip demolition, dismantling asbestos removal and concrete crushing.

Health and safety innovation with demolition

Site Zone is an innovation aimed to reduce risk using technology on sites. The device sends signals which is picked up by a receiver installed at the back of an operator’s hard hat or cap to alert another operator that someone is in that site zone. Hughes and Salvidge was the first demolition contractor to use this innovation during the T1 Reconfiguration project at Heathrow airport. “I’m all for it, its making our industry that much safer and appealing to people coming in. It’s a safe environment” says Wayne.

Dan then added that they also cater to the health aspect of health and safety, he stated: “We like to think safety wise we are as good as we can get, within reason for demolition, but we probably lacked on was the health side”. Because of this, the contractor has expanded its Mental Health Ambassador & Employee Assistance Programme, not only for employees but for immediate families to fully support and create a positive wellbeing sphere.

Dan also clarified that employee welfare on a demolition site is a key part if any project. “It is on par with the remainder of the construction industry in regard to Health and Safety standards.” For instance, a dust particle analysis is always conducted to identify what kind of dust can potentially be breathed in by workers to ensure the correct protection is provided.

The day was concluded with a tour inside the halls where barrels of goods such as alcohol were stored. Today it has many uses, including as a location spot for Hollywood movies such as Fast and Furious 6.

The Women in Health and Safety network is run by an independent committee, Chaired by Dr Judith Grant, Director of Health and Wellbeing at Mace. The network hosts free-to-attend events, for all health and safety practitioners, which take place throughout the year around the UK.