Jamie Hailstone is a freelance journalist and author, who has also contributed to numerous national business titles including Utility Week, the Municipal Journal, Environment Journal and consumer titles such as Classic Rock.
February 27, 2018

beast from the east

The Trades Union Congress (TUC) has urged bosses to let staff work from home as heavy snowfall causes disruption across the country. 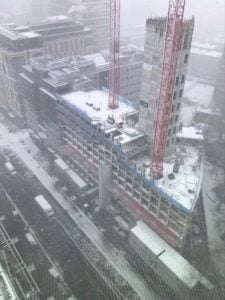 Kent, Surrey, Suffolk and Sussex are among the worst-hit counties, with between five and 10cm of snow overnight, while North-East England has received up to 8cm.

There has also been disruption on the travel network with train cancellations on various routes.

More heavy snowfall is expected across the country during the rest of this week.

Safety in the snow

In light of the current weather conditions, the TUC has urged employers to draw up bad weather plans, so staff know what is expected of them.

It has also warned bosses not to withhold pay from staff or force them to travel into work when it is not safe.

The TUC has also reminded companies to keep workplaces safe and warm during the current cold weather snap.

According to the trade union, the indoor temperature in most workplaces should ideally be around 22C, although the absolute legal minimum is 16C.

And it states employers also should also ensure that workers are not working outdoors in the very cold weather unless absolutely necessary.

“When the snow causes problems on the roads and trains it is common sense for bosses to let their staff work from home, rather than struggle with a lengthy and potentially-dangerous commute,’ said TUC general secretary, Frances O’Grady.

“No one should be made to put their health at risk to get to work or be punished by losing pay or holiday, when they can’t get in because of the weather.

“Many good employers now have “bad weather” policies in place, so staff know what to do,” added Ms O’Grady. “But bosses must also be aware of the difficulties faced by staff whose children’s schools are closed due to the weather. Some may be able to take their children to work, or work from home. But those who can’t need support and understanding from their employers.”

Maybe Ms O’Grady should become a boss for a while and recognise the difficulties of some of her suggestions.

Agree with the sentiment and the HSE do produce helpful guidance, but the TUC should know better than to state publically that there is a UK statutory minimum workplace temperature.
Absolut rubbish to say “absolute legal minimum is 16C”, it would be much easier for all of us if there was, but there isn’t.

good advice as long as staff are able to get to their work from home ie works lap tops and assess to the company’s site, many multi building organisations could allow staff to make their way to their nearest building rather than travel similar to my organisation.

but there are limits to this such as the NHS, nurses couldn’t work from a different location and have to turn up for work otherwise the NHS would grind to a halt. but in general terms i agree with the artical

Can someone tell the TUC to at least read the HSE advice if they can’t be bothered with reading the law and to not make incorrect statements which lead to all sorts of nonsense. What the law says: Temperatures in the indoor workplace are covered by the Workplace (Health, Safety and Welfare) Regulations 1992, which place a legal obligation on employers to provide a ‘reasonable’ temperature in the workplace. Minimum workplace temperature The Approved Code of Practice suggests the minimum temperature in a workplace should normally be at least 16 degrees Celsius. If the work involves rigorous physical effort, the… Read more »

I once drove 3 hours in atrocious snowy conditions to get to work and came back 15 minutes later after they closed up. Very aggressive senior management – end result was that staff would call in sick after being threatened with loss of pay

Slightly worrying that the statement “the absolute legal minimum is 16C” is in an article that is fairly widespread. It is very difficult to control some workplaces when a minority of people want an excuse to go home and people can access these articles and try and use them as the excuse that they have been looking for. There actually is no legally determined minimum or maximum temperature.