Jamie Hailstone is a freelance journalist and author, who has also contributed to numerous national business titles including Utility Week, the Municipal Journal, Environment Journal and consumer titles such as Classic Rock.
January 31, 2019

Olympic Bronze medallist, Beth Tweddle MBE, has issued legal proceedings against the makers of the The Jump after suffering injuries, which forced her to pull out of the celebrity ski-jumping show. 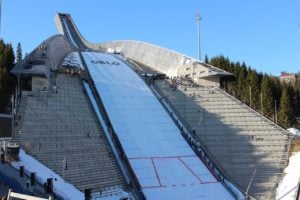 Ms Tweddle had to undergo surgery on her neck and spinal cord after suffering fractured vertebrae when she crashed into a barrier following a training jump during the third series of the show in 2016.

Seven of the initial 12 contestants in that particular series, including Tina Hobley, Linford Christie, Mark-Francis Vandelli, and Rebecca Adlington, suffered injuries and were forced to withdraw.

“She has had to put many parts of her life and career on hold and while Beth is making a good recovery she still cannot do many of the things she previously could as an elite athlete and may never fully recover,” added Mr Danas.

“Despite attempts to settle the legal case amicably, the defendants involved in making The Jump have so far denied any liability for her injuries and we have been left with no choice but to issue court proceedings as we seek to resolve the case.”

Tweddle says the hardest part of her recover is psychological

Ms Tweddle added: “It’s been a long journey and my recovery is still ongoing. I’m not sure I’ll ever be 100% again. The effects of my accident still interrupt my daily life, and aside from the severe physical injuries at the start, the hardest part of the recovery process has been the psychological element, dealing with and processing the whole accident and the aftermath of what happened. I said before that I don’t want this accident to define me, and I work hard every day to ensure that isn’t the case.

“It’s disappointing that we have had to seek court proceedings as we had hoped the makers of the programme might be willing to work with us to settle the case. But I just want to make sure that there is full accountability for people involved in creating shows like this and to help prevent others having to go through what I have for the past three years.”

The reality show attracted a lot of publicity when it ran on Channel 4, because of the large number of injured contestants.

Eddie the Eagle says contestants should take the blame

Speaking in 2016, former British ski jumper Eddie ‘The Eagle’ Edwards, a resident expert and commentator on the show, said the celebrity contestants in The Jump “must bear the brunt of the blame” for their injuries.

“They signed up for this, they’re being paid for this. If they are hurting, it can often be self-inflicted,” he told the Daily Mail three years ago.

In a statement given to BBC Sport, production company TwoFour, who make The Jump, said: “This matter is being dealt with by our insurers and we are unable to comment as the claim is ongoing.”

Courage and risk – a different perspective