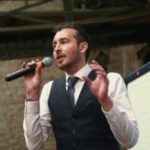 The story of automation that will save lives

Ben Duncker, Business Development Director at Highway Care, talks to Safer Highways about the journey to date around the automated cone laying machine. 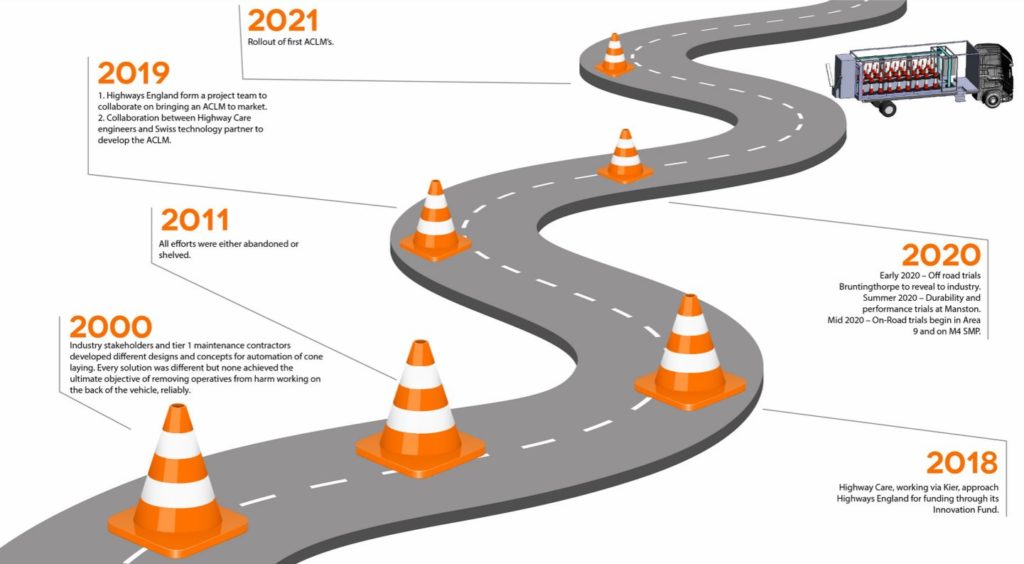 It must be difficult getting ready for work every day knowing you face yet another day of putting your life at risk by just doing your job. Most workers in the country don’t have to contemplate that kind of pressure. It is worrying not only for themselves but also their family friends and colleagues especially when accidents happen working next to live traffic, as they do with alarming frequency. Nobody should face that at work.

For anyone involved in traffic management and wider work on the highway, the need to remove operatives from risk and in particular, working next to live traffic, is as important now as ever, with deaths from incidents like these still sit at an alarmingly high rate even in a modern era of innovation.

This was the driving force behind the reason why Highway Care, working with its project partners and Highways England wanted to protect workers from live traffic by developing a new type of automated machinery.

The start of this journey actually dates back to the early 2000s when Highway Care and a number of the industry’s supply chain got together to discuss and debate the capability of industry to automated cone-laying process. Several different designs presented at the time but none of them were successful and by 2011 the project was mothballed.

“There were numerous projects going on but none of them were getting anywhere because it was like shooting for the moon without knowing where it was. At the time there was no clear specifications or guidance to work to so coming up with a solution was just not feasible,” says Ben Duncker, Business Development Director at Highway Care, a company whose whole reason for being is to better protect the people we put to work.

But the problem with accidents and near misses on the network didn’t go away. So, in early 2018 Highway Care joined forces with Kier to approach Highways England for backing through its Innovation Fund to re-visit the project.

Highways England then formed a cross project team consisting of Highway Care, Kier, Amey, HW Martin and King-effectively bringing together the industry to once against consider the viability of automating the cone laying process.

“We got to focus on what the art of the possible was with new enthusiasm and clear guidance,” says Mr Duncker. A wide-ranging industry engagement programme, including various associations such as the former Highways Term Maintenance Association (HTMA) and the current Traffic Managers Contractors Association (TMCA) sought to find out what a minimum standard should look like.

From that came the plans for an automated cone laying machine, first generation phase one standard, from which prototypes were developed. By this point later on in the same year there were two projects teams working in parallel with Highway Care and Kier developing the first machine, whilst King and HW Martin, worked on a second.

“I think the purpose for the development of two different machines is like any innovation, to ensure people feel like there is choice and competition at the same time in the marketplace. Both solutions share a focus of the health and wellbeing of operatives by removing them from risk and dangerous operations next to live traffic. While the level of health and safety has improved significantly over time the number of near misses has plateaued and therefore the level of risk remains dangerously high. Supplemental to this we are seeing an increase in historic health issues such as muscular scilito injuries as a result of the requirement to lift several tonnes of cones on a nightly basis. Through the development of the automated cone laying machine, we want to harness the power of innovation to drive change in this area” says Mr Duncker. 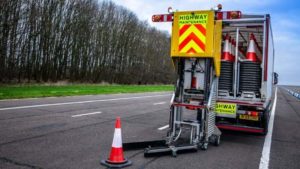 To date, ergonomics experts have struggled to identify a suitable method of placing and removing cones that doesn’t have an impact on workers due to the twisting of the body required and environmental conditions that the work is undertaken in.

An average 1m high cone weighs approximately 10kgs. A typical 4km closure involves putting down – and later removing – approximately 260-300 cones, meaning that two workers will both handle between five and six tonnes per shift in cones alone, when additional equipment such as frames, signs, lamps, sandbags are factored in, it is not unreasonable for them to lift between eight and 10 tonnes per shift in total. A single kilometre of coning takes approximately 15 minutes to install and remove, resulting in an exposure time to live traffic of approximately two hours per shift. As well as removing operatives from an area of risk, one of the criteria for the new automated cone laying machine, is that it must be able to lay/collect at least 400 cones at a rate of one every 10 second.

Highway Care has been working with a Senn in Switzerland, who already had experience in developing an automated cone laying machines elsewhere in Europe. The two companies have been working together to take that successful technology and modify it to ensure it meets Highways England and UK standards.

The prototype made of this particular machine made its debut in the UK in February 2020 at Bruntingthorpe where it went through various trials and tests to help meet the minimum standard required as well as its overall durability. The three phases of the process are the ability to meet the minimum standard with a test off road, an off-road durability trial-where the machine has to go through a number of operations without failure and finally the machine needs to be assessed by an independent regulator to meet the GG104 health and safety assessment before facing a number of trials on the live network.

“We have rached the point where we are halfway through that final stage, so things are looking very promising indeed,” says Mr Duncker, who hopes a final review and acceptance will take place in early 2021 and the hoped that the machine will be commonplace on the roads by next summer, following successful live tests on the M4.

At this point Highway Care will be drawing together a strategic delivery group of interested Tier 1 contractors who will manage the launch of the machines to ensure the continued monitoring of the in-field performance and capability as they first go live on the network. “There has been so much compressed interest in this since we first went to the drawing board dating back in 2010,” says Mr Duncker.

But why was this development so important for Highway Care and its growing portfolio of products? “We have always tried to be a leading innovator in highways health and safety products, and services, sector in the UK. Saving lives and preventing injury has been a mission of ours since we introduced the first crash cushion in the early 90’s so this has been the perfect opportunity to continue that”. Whilst some may question whether this is about taking jobs away from operatives, it really isn’t. As an industry we realise that we face challenges through a rapidly aging workforce and attracting talent into the sector by automating processes and taking people away from high-risk areas we give ourselves a unique opportunity to develop other skill sets and consequentially contribute to fixing the problem” he adds.

So, what is next for the technology – how far can it be taken? “We want to see if we can consider developing ancillary technology that will help improve the safety of a closure and how these machines can be integrated into the bigger picture. Wouldn’t it be great if we had a scenario where using automation, we could digitally assess the live traffic count and the machine goes out and puts out a whole closure at the push of a button?” says Mr Duncker.

This article was originally published on Safer Highways.

Download Now
The story of automation that will save lives Ben Duncker, Business Development Director at Highway Care, talks to Safer Highways about the journey to date around the automated cone laying machine.
Kevin Robinson
SHP - Health and Safety News, Legislation, PPE, CPD and Resources