The Rail Accident Investigation Branch (RAIB) has released its investigation report into the derailment of a passenger train on 12 August 2020, near Carmont, Aberdeenshire, in which three people died and six people were injured. 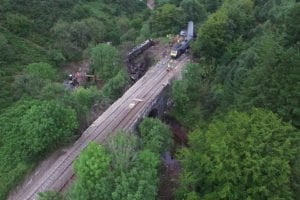 All six vehicles of a passenger train derailed after striking a landslip just over a mile north-east of Carmont in Aberdeenshire. There were nine people on the train at the time of the accident; three train crew (the driver, conductor and a second conductor travelling as a passenger) and six passengers.

The train was travelling at 73mph (117km/h), just under the normal speed for the line concerned. After derailing, the train deviated to the left, before striking a bridge parapet, causing the vehicle to scatter.

On the morning of the incident, there was near-continuous heavy rain at the site of the accident, close to average rainfall for the month of August in this part of Scotland.

The train dereailed due to being struck by debris that had washed out of a drainage trench. This trench, which had been constructed between 2011 and 2012, contained a perforated pipe that had been instaled as part of a project to address a known problem with drainage and the stability of a cutting in that area.

However, the drainage system and associated earthworks had not been constructed in accordance with the original design and so were not able to safely accommodate the water flows that morning.

At the time, the Secretary of State requested an assessment of the impact of extreme weather on the resilience and safe performance of the rail network and an initial report was provided in September 2020. An update was then made available in March 2021, which included the reports and recommendations from independent taskforces led by renowned experts Lord Robert Mair and Dame Julia Slingo.

The following reports are available:

They are available here.

Following the incident, the RAIB said that scope of the investigation was likely to include:

RAIB’s investigators found that a low earth bank (bund) had been constructed and ran across a slope leading towards the track. The prescence of this bund significantly altered the flow of water; extreme rainfall would cause a concentrated flow into the stepply sloping section of the trench.

The evidence indicated that the intensity and duaration of this rainfall would have generated water flows into the trench that were sufficient enough to wash away the gravel fill and the ground surrounding the trench.

No instruction was given by route control or the signaler that train 1T08 should be run at a lower speed on its journey between Carmont and Stonehaven. At that time, there was no written process that required any such precaution in these circumstances.

Consequently, normal railway rules were applied to the train movement. The RAIB’s investigation found that the ‘route controllers’ had not been given the information, procedures or training needed to effectively manage the complex situation that occured on the morning of 12 August 2020.

RAIB has made 12 recommendations for the improvement of railway safety, these include:

RSSB’s Chief Executive Officer, Mark Phillips told SHP: “Our thoughts are with the families and friends of those tragically killed and injured in the accident at Carmont. The Rail Safety and Standards Board (RSSB) will address recommendations placed on it in RAIB’s report, and share learnings with the rail industry.

“While Britain’s railways have a very good safety record, this catastrophic incident shows we must not be complacent. RSSB will work with industry members to improve safety and promote better understanding of risk for the future.”