In conversation with Clive Johnson: “Health isn’t just a bolt-on” 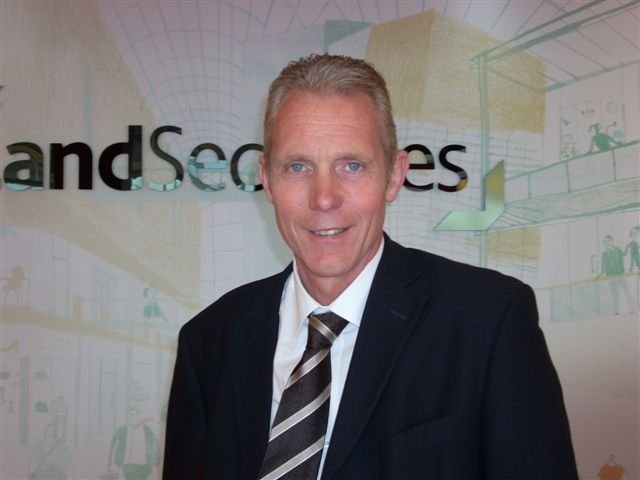 Land Securities, the largest commercial property company in the UK, boasts the Trinity Leeds, One New Change in London, Bluewater shopping centre in Kent and Gunwharf Quays in Portsmouth among its portfolio. For the last two years the company has been focusing on putting the health back into health and safety to make the company “healthier, safer, and happier for good”.

Clive Johnson, Group Head of Health and Safety, spoke to Roz Sanderson, SHP, about managing health and safety for a FTSE100 company, and why occupational health is integral to all processes, and isn’t just a bolt on.

Clive Johnson has been a health and safety practitioner for two decades. In that time he has been involved with some of the most high profile construction projects the UK has seen, he has worked for ASDA Walmart Group, BAA and now Land Securities. But, he says it has only been in the last two years that he has really dealt with health. And he’s not alone.

“I have spoken to many audiences and asked them how many of them work in health and safety and how many have really just done safety. There’s not many people that put their hands up and say they have done both. That’s a reflection of how we have just really dealt with the immediacy of safety and not the latency of health,” begins Clive.

In the 2001 safety summit, led by John Prescott, it was clearly stated that “we are killing too many people.” Action was taken and since the summit, construction fatalities have reduced significantly.

Then, as part of the Construction Industry Advisory Committee (CONIAC), Clive and a cross-section of industry leaders, were presented with the figures of deaths within the construction industry from work related ill-health.

“The penny dropped” says Clive. “We had all been dealing with safety – fear of prosecution, fear of death; but we’d not been looking at health.”

Since 2014, Clive and Land Securities have been focused on occupational health, hoping to bring it in line with safety, giving both aspects an equal billing.

So Clive has decided that now is the time for a construction health summit, bringing together key players in the construction industry to address the shocking statistic that deaths as a result of occupational disease are 100 times more likely than deaths by accidents.

Initially, he went to his company for support and then gathered support from 20 big name organisations including construction companies, unions and the Health and Safety Executive and created the Health in Construction Leadership Group.  The first point of action for the group was to host a CEO Summit which took place on the 21st January 2016 where 179 top leaders in the construction industry came together to commit to raising the profile of occupation health in construction.

So, why is it that health has been on the back burner for so long? Clive explains how the lack of visibility and the delay in noticeable effects leads to inactivity.

“If someone notices edge protection missing on a site, they will report it, but are they going to report too much dust?” he asks. 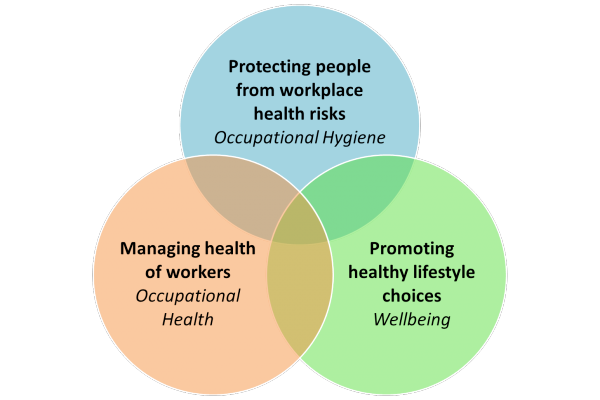 The Health Triangle: “If one part is missing you don’t get it. You need all parts to make it work.”

“One of the main problems is that people don’t actually know how to differentiate between occupational health, occupational hygiene and wellbeing.” Clive continues. “Within Land Securities to start with we simply defined what occupational health is and what it’s not. We then asked everyone to go away with a document defining the different areas of occupational health and how they would deal with each part. Like the fire triangle, if one part is missing you don’t get it – you need all the parts to make it work.”

So much of Clive’s approach to raising the profile of health is through education and getting to people on the right level. This has led to an innovative way of communicating with site workers. Working with the Men’s Health Forum charity, Land Securities has been using a comedian to talk to construction workers about men’s health.

“We trialled this on one site. There are no presentation slides, just 30 guys off site in a room for one hour.  They’ve never laughed so much in their lives. But also, the penny dropped. It was on their level. And now he goes out on all of our sites. It’s memorable and it’s at the right level.”

Alongside this, Clive has been looking at how other countries manage health, and in particular mental health.

“We are trying to introduce the Mates in Construction (MIC) model that is used in Australia. It’s all about educating people to speak to guys on site about what they should be doing about their own mental health, and looking out for the triggers. Construction suicide rates are extremely high. It’s scary really.

“This is why we now have mental first aiders on site – it’s just a different type of first aid requirement, recognising the signs of depression,” continues Clive. “We have site workers working Monday – Friday away from home and all those things add up. It’s about caring for your people at the end of the day. We are only as good as the people on our sites, so why shouldn’t we look after them?”

One way to get people on board with caring about their own health at work is to make it personal, argues Clive.  “If you ask most people what the most important thing in their life is, they’ll say ‘family’. So why do they expose themselves to harmful dusts and other things? I tell them: don’t do things because of regulations, do it because you want to go home at the end of the day.”

Clive explains that when he was working on the Terminal Five project at Heathrow when “it was just a hole in the ground” there was a concern about all of the high risk activities.

“We decided to bring in the worker’s wives and girlfriends – and unfortunately at that stage there weren’t any women working on site who could bring their husbands. We filled two 55 seater busloads of ladies, drove them around, to learn about what their partners do. It had such an impact, as there was a new added pressure for them to stay safe.

“Even when we do inductions for someone in accounts, we take them to site. We make it real.

And with all this focus on health, what happens to safety?

The future of health

So what’s next for Clive Johnson and Land Securities? Clive said that when he first got the job he said he would only report directly into the CEO, as that is the way health and safety should be. Now he says the CEO supports and backs him on everything he has done, including his focus on health. In meetings health and safety is no longer a separate item on the agenda, it is part of every item on the agenda.

And now, as a client, Land Securities ensures that every contractor working on a project over six weeks must sign up to an occupational health scheme. Alongside this is Clive’s aim to have an occupational hygienist in every team of health and safety professionals, undertaking health surveillance at the point of work.

Looking forward, Clive aims to bring in a scheme of transferrable health records, which act like CSCS cards, only for health. This would ensure that workers can transfer their health information from one company to the next, as they would transfer their skills.

All of these aspects feature in Clive’s health charter, which was unveiled at the Construction Health Summit on the 21 January.

“Lots of people are doing good things but there needs to be a joined up and consistent approach. The Summit on 21 January showed that and the 21st April will hopefully give some examples of how we can have a joined up approach. .” Clive continues.

“We need to get CEOs and employers of people to realise health is important. People will stay with you, and it’s morally right.”

Clive Johnson is group head of health and safety for Land Securities, and Chair of the Health in Construction Leadership Group.

Click here to view SHP's coronavirus advice for employers hub
In conversation with Clive Johnson: “Health isn’t just a bolt-on” Clive Johnson, group head of health and safety, spoke to Roz Sanderson, SHP, about managing health and safety for a FTSE100 company, and why occupational health is integral to all processes, and isn’t just a bolt on.
Roz Sanderson
SHP - Health and Safety News, Legislation, PPE, CPD and Resources

‘Work Under Pressure’ centres on the personal story of Neil Moon who was so severely bullied by co-workers that he attempted suicide and suffered a breakdown that kept him out of work for 5 years. Neil wants to share his experience as widely as possible to highlight the issues around stress and other mental health issues. Also in the film are experts from Restore and Root & Branch, mental health charities in Oxfordshire who helped Neil.