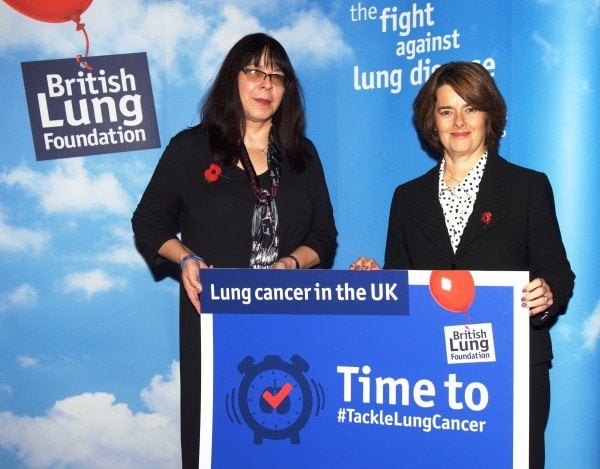 More than a third of lung cancer diagnoses are made via emergency admissions, which means that UK lung cancer survival lags behind that in Europe and the United States. Tragically, only 10 per cent of lung cancer patients survive five years following a diagnosis.

The headline findings come from the British Lung Foundation Expert Working Group’s report, which was launched earlier this week at a House of Commons reception.

The British Lung Foundation Expert Working Group’s report reveals that 34 per cent of lung cancer diagnoses are made via emergency admissions, with many receiving attention when the disease is already too advanced for curative treatment.

An expert lung cancer working group of clinicians, commissioners, patients and charities working in lung cancer was drawn together to discuss ways in which to tackle the poor outcomes in lung cancer and patient experience.

Jane Ellison MP said: “Early diagnosis and access to swift and effective treatment is crucial to improving survival rates. Although the rate of emergency lung cancer diagnoses has fallen, too many lung cancer patients are being diagnosed at this stage.”

Dr Penny Woods, chief executive of the British Lung Foundation added: “It is time for lung cancer to be prioritised, and for the stigma associated with the disease to be overcome. Other cancers have seen marked improvements in outcomes, now we must ensure that lung cancer is not left behind.”

Monitoring and measuring radon exposure in the workplace