Aberdeen Market has been fined £80,000 after admitting to safety failures, following the death of an 80-year-old man in June 2018. 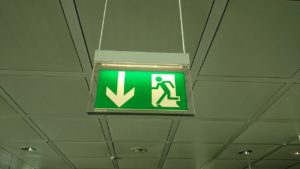 Mr Frank Finnie was discovered at the bottom of a fire escape stairwell at the market, with poor lighting found to be the primary cause of the incident after an investigation was carried out. The operator has been prosecuted over a contravention of the Fire (Scotland) Act 2005.

The subsequent investigation found that the “Market Village Company Ltd failed to maintain the lighting in the stairwell”.

Head of the Crown Office’s Health and Safety Management Unit, noted that the incident was “entirely forseeable”, and that “this conviction should serve as a reminder to other companies to adhere to the regulations and that failure to do so can have tragic consequences”.

Firesafe advises: “emergency routes and fire exits must be well lit and indicated by appropriate signs”, while “in locations that require illumination, emergency lighting of adequate intensity must be provided in case the normal lighting fails”.

In England and Wales, though not Scotland, Under the Regulatory Reform (Fire Safety) Order 2005, the maintenance and access to emergency/fire escapes come under the jurisdiction of the responsible person(s) of a non-domestic premises. They should form a crucial part of a property’s fire safety plan.

Further advice on emergency exits can be found, here.

Click here for more information and to view this Fire Safety eBook
Poor lighting leads to fire escape death and £80,000 fine Aberdeen Market has been fined £80,000 after admitting to safety failures, following the death of an 80-year-old man
James Moore
SHP - Health and Safety News, Legislation, PPE, CPD and Resources