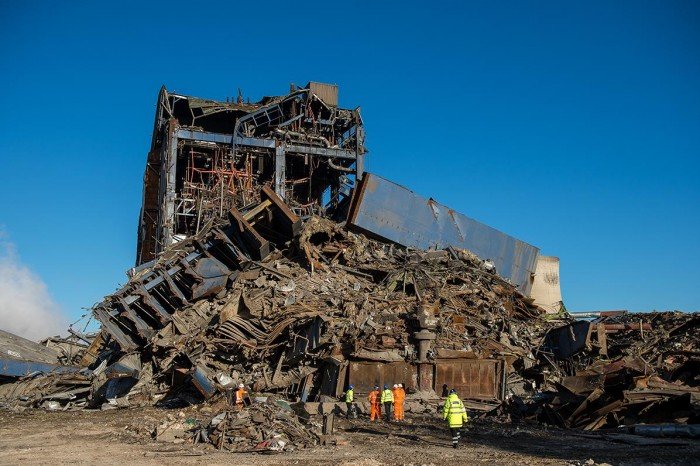 A body has been found in the rubble of Didcot power station after it collapsed in February this year.

Four people died when the plant exploded and collapsed on 23 February. The body of Michael Collings, 53, was recovered from the site on the day, while Chris Huxtable, 34, John Shaw, 61, and Ken Cresswell, 57, were entombed in the rubble.

The body, which is yet to be formally identified, has been located and removed from the site early this morning (Thursday 1 September).

A Guard of Honour marked the removal and included representatives from the families of the missing men, Thames Valley Police, Oxfordshire Fire and Rescue, RWE and Coleman and Company.

A police statement said: “The person has not yet been formally identified and this will be a matter for the coroner.”

When Didcot collapsed in February, search efforts were made to find the three missing Coleman & Co employees, but they had to be halted in May for two months when contractors reached a 50m (164ft) exclusion zone, beyond which it was considered too dangerous to continue.

On 17 July a remote demolition brought down the decommissioned site in a unique operation using remote-controlled robots.

Following this the recovery effort continued, and the first of three bodies has been found over six months after the incident occurred.

Mark Coleman, managing director of Coleman & Co, said: “It’s been more than six months since the terrible accident at Didcot. I know these have been the most dreadful days for the families of our three missing friends and colleagues – Chris Huxtable, John Shaw and Ken Cresswell.

“We continue and will continue to offer our full support to their families as the recovery operation continues.”

Building in Stevenage collapses onto street