Dr Tim Marsh PhD, MSc, CFIOSH, CPsychol, SFIIRSM is MD of Anker and Marsh. Visiting Professor at Plymouth University he is considered a world authority on the subject of behavioural safety, safety leadership and organisational culture. As well as many of the world's most recognisable industrial names Tim has worked with diverse organisations such as the European Space Agency, the BBC, Sky TV, the RNLI and the National Theatre in his 25 year plus consultancy career. He has key noted and chaired dozens of conferences around the world including the closing key note at the Campbell Institutes inaugural International Thoughts Leaders event in 2014. He has written several best-selling books including Affective Safety Management, Talking Safety, Total Safety Culture, the Definitive Guide to Behavioural Safety and Organised Wellbeing. Previously he led Manchester Universities ground-breaking research team into behavioural safety methodologies in the 1990s.
May 29, 2021

Studies suggest it can take a lot of hard work and real-life proof to develop trust but that it can be lost very quickly. This is a case study to that is based on an amalgam of two genuine clients that introduces a model of trust hierarchy.

Imagine a worker who joins an organisation from one with close to zero trust but who finds that they’re being treated fairly to date. Drinking with old colleagues they’d be likely to say things like ‘actually, it’s not bad… if keep your head down and your nose clean then all’s good really…’.

Our new worker notes that, actually, minor mistakes are treated as learning opportunities and as largely inevitable given that people are involved. The something quite serious happens. A mistake is made that costs the company proper money… and they think ‘righto… now we’ll see’ but instead of anger and blame and someone shouting “for Christ’s sake guys ]… the whole batch has had to be POURED AWAY!!” the investigation starts with ‘curious why’ questioning which delivers some learning and ends with a perfectly reasonable ‘but please, please ensure this doesn’t ever happen again’.

You can imagine that the person in question would begin to believe that the management of human error is based on principle and values. It’s still perfectly congruent to consider it entirely fair that making a habit of making such expensive mistakes will prove ‘career defining’. (It’s a just culture, not one with no accountability at all).

Then they hear that the ‘big boss’ would like to see them in their office. They ask of their supervisor ‘oh hell, why does she want to see me personally – I thought you briefed her, and it was all good?’ and they get told ‘she didn’t say… ‘.

So… they enter the office and with much trepidation and are asked to sit in what feels like the ‘naughty chair’. But the boss says ‘I’m told that during the investigation of the spoiling of the large Robertson’s batch you were open, honest and thoughtful. Indeed really quite insightful I’m told. We’ve been able to tweak a few things to ensure it’s unlikely to happen again and as a result I imagine it might even save us money in the long run. Robertson’s were very reasonable about the whole thing as they always are, but Cooper’s would have jumped on it with glee and sent the lawyers in waving those penalty clauses I had to sign to tie in the contract and really wish I hadn’t frankly…! ah… that’s between you and me by the way…! Anyway, I have just commissioned an exciting new quality initiative and I wondered if you’d like to join the team…”?

Impressed with her candour about the Cooper’s contract and direct style he does join. His old mates think he’s lost the plot ‘for no extra money! Are you insane?’ but he finds working on it both fascinating and rewarding. Insights into the psychology of any ‘work-arounds’ are, at first, shared very carefully and only then if they can be entirely anonymised – but as it becomes obvious that the focus is entirely on learning he feels free to fully engage. He’s been around the block and has a lot of workaround insight to contribute!

Down the pub our man is soon talking about the company as ‘us’… much to his mates’ amusement. “Us? Us? You’re only a bloody engineer… you got shares in them or something?’ But the whole point is that, in a way, he has. There’s a genuine two way and on-going investment at work here. 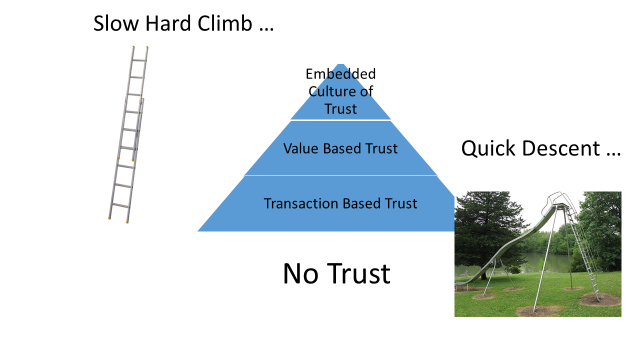 Then the inspiring boss gets head hunted and leaves. The executive board, impressed by his company’s bottom line figures, interview a local FCO who fancies his first CEO post. They really take to his clear thinking, determination and palpable ambition. He’s from Coopers.

There’s a slight problem with a batch for his old company. Still fuming that he left them they blow it into as large a problem and as major headache as they possibly can. (But you could have trusted them to do that anyway). He’s furious and makes sure to pass this down the line making it clear that ‘someone be held fully accountable’. (“A junior head must roll” as the BBC used to say – and as the sacking of the man Martin Bashir commissioned to forge those documents clearly demonstrated). It’s nothing to do with our man but he shares everyone’s perception about what happens to the junior person unlucky enough to be standing closest to the incident…

By that Friday night’s drinks our man is back to referring to his company as ‘them’ and soon looking for another job. Naturally, he starts by sending his CV to his old boss…

Click here for more from Tim on this subject…

Listen today!
Trust and toxicity – an illustrative case study Studies suggest it can take a lot of hard work and real-life proof to develop trust but that it can be lost very quickly. This is a case study to that is based on an amalgam of two genuine clients that introduces a model of trust hierarchy.
Tim Marsh
SHP - Health and Safety News, Legislation, PPE, CPD and Resources