Following the fire which ripped through the 850-year-old Parisian cathedral, devastating the roof and causing the spire to collapse, reports have emerged about the potential threat of lead poisoning to local residents. Dr Adrian Hyzler, Chief Medical Officer at Healix International, highlights the dangers of lead exposure and outlines some measures which can be taken to prevent it. 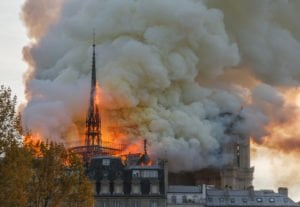 April’s fire shocked the world, but thanks to the sterling work of firefighters the building was saved from total collapse. Plans are already in place for a full restoration. The roof and spire of the iconic building were unable to be saved though and that is the focus of this recent report.

Contained within the roof and the spire were several hundred tonnes of lead cladding. With the fire reaching temperatures in excess of 800C, a huge amount of toxic lead particles were released into the atmosphere before settling back on surfaces and in the soil. Lead-contaminated soil can pose a risk through direct ingestion, uptake in vegetable gardens, or tracking into homes.

It has been reported that surrounding areas have registered levels of lead contamination ranging between 500 and 800 times the official safe level. The US Environmental Protection Agency (EPA) has set a standard for lead in the ambient air of 0.15 µg/m3 averaged over a three-month period.

Young children are particularly at risk as they can absorb four or five times the amount of ingested lead as adults. Unborn foetuses are also vulnerable. It has been suggested that even at ‘lower levels of exposure’ that cause no obvious symptoms, and that previously were considered safe, lead is now known to produce a spectrum of injury across multiple body systems. In particular, lead can affect children’s brain development resulting in reduced IQ, behavioural changes such as reduced attention span and increased antisocial behaviour, and reduced educational attainment. As lead exposure increases, the range and severity of symptoms and effects also increases. The neurological and behavioural effects of lead are believed to be irreversible.

In the months after the fire, the regional health agency in Paris recommended blood tests for pregnant women and children under seven years of age who live near Notre Dame. The recent alerts have also resulted in the closure of two local schools, pending further investigation by environmental agencies. The Paris authorities have ordered a deep clean and removal of hazardous substances from nearby schools, before the children return for the Autumn term.

Lead removal work at the cathedral itself is set to resume, but with stricter safety procedures. Roads and public plazas around Notre Dame have been closed to the public since mid-April, after exceptionally high levels of lead were recorded.

An environmental group has filed a lawsuit against the city’s authorities for criminal negligence in not alerting residents sooner. The long-term public health effects of chronic lead exposure on children in low-income urban areas is a topic of much ongoing debate. The effects of a mass exposure on children near Notre-Dame are difficult to anticipate.

What can be done to prevent exposure to lead?

Visit the SHP bookshop
Environmental consequences of the Notre Dame blaze Following the fire which ripped through the 850-year-old Parisian cathedral, devastating the roof and causing the spire to collapse, reports have emerged about the potential threat of lead poisoning to local residents.
Safety & Health Practitioner
SHP - Health and Safety News, Legislation, PPE, CPD and Resources

Notre Dame one year on: ‘Don’t be complacent about fire safety’