Firm and director prosecuted after worker died in fall 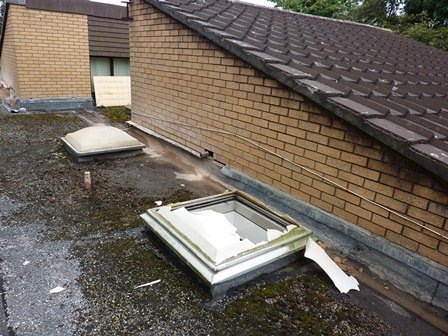 A Yorkshire roofing firm and its director have been prosecuted after a worker fell to his death though a fragile roof-light.

Barry Tyson, a 52 year old self-employed brick-layer, suffered fatal head injuries as a result of the fall whilst he was working to refurbish the flat roof of Aspin Park School in Knaresborough.

Watershed (Roofing) Ltd a framework contractor for North Yorkshire County Council and one of its Directors, Steven John Derham from Bradford, had engaged Mr Tyson to carry out necessary brickwork on the roof, as part of a scheme to add insulation and re-felt it.

Mr Tyson had been kneeling on the roof working when the incident happened on 16th August 2011. When he stood up he fell backwards through a roof-light and into the boys’ toilet two metres below. He was taken to hospital by air ambulance but died later from his injuries.

Bradford Crown Court heard today (13th July) that a Health and Safety Executive investigation found Watershed had prepared a construction phase plan which stated that before work was carried out, the plastic domes of all roof-lights needed to be removed and the apertures boarded over to prevent falls, but when roofers accessed the roof it was found that the domes could not be easily removed.

The court also heard Watershed’s Director Mr Derham visited the site on the first day to check it had been set up correctly, and the difficulties with removing the roof-lights were discussed with the workforce. It was decided that works could progress without any covering of the roof-lights.

Mr Steven John Derham, 47, of Winterton Drive, Low Moor in Bradford pleaded guilty in his role as Director of the company to a breach of section 37(1) of the Health and Safety at Work etc Act 1974 and was fined £7000.

“Mr Tyson’s death was entirely preventable. The risks of falling through fragile materials are well known in industry and yet they remain an all-too-common occurrence.

“Control measures are often simple and cheap to install and companies must ensure they are put in place before workers are put at risk.

“Watershed and Mr Derham knew this but allowed work to continue without any protection measures. However, both defendants pleaded guilty at an early stage and have taken remedial action to prevent a recurrence.

“This case should also act as a reminder to Company Directors and Senior Managers of their responsibilities to workers, and that HSE will prosecute those who fail in their duty of care.

“Mr Tyson was a loving father, grand-father and husband and will be sadly missed by his family.”

Listen today!
Firm and director prosecuted after worker died in fall A Yorkshire roofing firm and its director have been prosecuted after a worker fell to his death though a fragile
Safety & Health Practitioner
SHP - Health and Safety News, Legislation, PPE, CPD and Resources