Ian joined Informa (formerly UBM) in 2018 as the Editor of SHP. Ian studied journalism at university before spending seven years in online fantasy gaming. Prior to moving to Informa, Ian worked in business to business trade print media, in the automotive sector. He was Online Editor and then moved on to be the Editor of two publications aimed at independent automotive technicians and parts distributors.
August 20, 2019

30 years on from the Marchioness disaster, which saw two Thames river boats collide, resulting in the deaths of 51 people, the Port of London Authority (PLA) says that some of the basic recommendations to reduce the risk of boats sinking have still not been implemented. 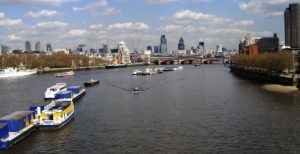 On 20 August 1989 The Marchioness pleasure steamer sank after being struck by the dredger Bowbelle on the River Thames between Cannon Street railway bridge and Southwark Bridge.

A vigil took place on the banks of the Thames on Monday night (19 August 2009) to remember those who lost their lives.

Carrying 130 people, The Marchioness had been hired for a birthday party. The exact details of what happened is unknown, but at around 1:46am, both vessels were travelling downstream when it’s thought that The Bowbelle hit The Marchioness from behind, spinning it round before striking it again, forcing the pleasure steamer to flip over and pushing under the water.

It took just 30 seconds The Marchioness to sink; 24 bodies were recovered from the vessel when it was raised.

Following the disaster, a report by Marine Accident Investigation Branch (MAIB) blamed a lack of lookouts, but was criticised by the families of the victims, who claimed no witnesses on either vessel were interviewed.

A formal inquiry was held in 2000, which said that “The basic cause of the collision is clear. It was poor lookout on both vessels. Neither vessel saw the other in time to take action to avoid the collision.”

In the aftermath of the tragedy, and the series of reports which followed, four new lifeboat stations were constructed along the Thames and it was ordered that historic river vessels be brought up to modern safety standards.

“It is high time this was acted on,” the PLA said.

Measures such as a system for tracking river traffic and flashing lights on bridges have been implemented, but the concern is that if a collision with an older vessel does happen, some of which have been in operation since before 1989, there could still be serious consequences.

Robin Mortimer, the PLA’s Chief Executive said: “It is quite extraordinary that 30 years after Marchioness, the most basic recommendation from that tragedy has never been implemented.

“These new standards may not have prevented the Marchioness disaster, but you’ve got to decide if the safety recommendations are important enough.

“There’s a good evidence base that older vessels are more involved in serious incidents, so they should be up to modern standards.”

All newly constructed domestic passenger vessels must follow rigorous regulations put in place by Maritime and Coastguard Agency (MCA). However, so far, existing vessels (which make up approximately 84% of the domestic passenger ship fleet) have not been required to comply.

One requirement is that Modern vessels’ hulls are divided into watertight compartments, so any flooding resulting from a breach can be more easily contained. It’s thought that the cost to implement these measures on existing vessels, and the restricted number of passengers the boats would be able to hold as a result, could force some ships off the river.

The MCA report claims that ‘Most operators of these existing vessels have not installed safety equipment beyond that required in the regulations in force when they entered service, even if additional equipment would be required for newer vessels.’

The MCA is currently in consultations, with the aim to raise the safety levels of existing vessels, to bring them more in line with the regulations for newer ships. The proposal, according to MCA estimates, would affect 606 vessels which are currently registered as being in operation as commercial passenger ships.

Subscribe to the newsletter ✉️
Marchioness disaster: Thames vessels still failing ‘basic’ safety recommendations 30 years on from the Marchioness disaster, which saw two Thames river boats collide, resulting in the deaths of 51 people, the Port of London Authority (PLA) says that some of the basic recommendations to reduce the risk of boats sinking have still not been implemented.
Ian Hart
SHP - Health and Safety News, Legislation, PPE, CPD and Resources