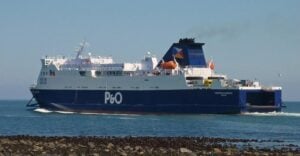 The ferry, which serves the Larne-Cairnryan route between Northern Ireland and Scotland, eventually made its way to its destination under its own power.

European Causeway, which failed a Port State Control Inspection in March and was detained in Northern Ireland due to “failures on crew familiarisation, vessel documentation and crew training,” left Cairnryan at midday and experience difficulty at around 1300 hrs, according to reports.

A P&O spokesperson said: “Following a temporary mechanical issue, the European Causeway is now continuing on its scheduled journey to the Port of Larne under its own propulsion, with local tugs on standby, where it will discharge its passengers and cargo as planned.”

A statement from the ferry company confirmed that there were no reported injuries on board the vessel and that a ‘full independent investigation would be undertaken’, once the ship had docked.

Earlier this week, the Spirit of Britain, which had been detained by UK Maritime and Coastguard Agency (MCA), was cleared to sail again. The MCA has been making its way through inspections of eight P&O Ferries to ensure they are fit to sail.

The first P&O ferry that operates from Dover to Calais has been cleared to sail again. The Spirit of Britain ship, which normally serves the Dover to Calais route, was found to have ‘a number of deficiencies’, had been detained by the MCA and could not set sail until the issues have been addressed.

The BBC has reported that the vessel has been conducting trial sails up and down the English coast between Dover and New Romney.

The MCA has been making its way through inspections of eight P&O Ferries to ensure they are fit to sail.

P&O Ferries vessel The Pride of Kent was detained in March for a series of documentation failures, training issues, faulty emergency equipment, just a few days after European Causeway was detained.

A spokesperson for the Maritime and Coastguard Agency said: “The Pride of Kent has been detained due to failures on vessel documentation, crew familiarisation and training, and emergency equipment not functioning properly, indicating a failure of the implementation of a safety management system. We have advised P&O to invite us back once they have addressed the issues. We do not know yet when this will be.”

Of the eight P&O Ferries that require MCA inspection, Pride of Hull and European Causeway have been inspected and cleared to sail, Pride of Kent and Spirit of Britain remain under detention, European Highlander was cleared for relocation but is yet to have its Port State Control inspection, and Pride of Canterbury, Spirit of France and Norbay all are yet to have their Port State Control inspections.

The detentions follow P&O Ferries’ decision to sack 800 of its seafarers with the aim of replacing the workers with agency staff. P&O Ferries CEO Peter Hebblethwaite said the difficult change would cut its crewing bill in half and help to ensure the company’s survival.

The mass firing sparked outrage in the UK as seafarers were given no notice and the company failed to consult unions or notify flag states in advance, breaches of the law Hebblethwaite has admitted.

Nautilus International and the RMT, unions which represent the majority of fired staff, welcomed the news that the vessels will not be permitted to sail.

Nautilus General Secretary Mark Dickinson said: “In a safety critical industry such as shipping, the importance of a competent, well trained, experienced crew cannot be overstated. This is even more the case in a company such as P&O Ferries where – in addition to the risks that are present in all shipping operations – there exists the additional pressures inherent in operating vessels that carry up to 2,000 passengers to extremely tight schedules, with rapid turnarounds, in the busiest shipping lanes in the world.

Unions Nautilus and RMT have been vocal in their opposition the P&O Ferries’ actions. RMT General Secretary Mick Lynch, said:  “It’s rare enough for the MCA to impound a ferry but P&O have now had two in a week after the jobs carve up which speaks volumes about the dire state of their operation.

“It’s now high time for these important vessels to be taken over under public control with the sacked crews reinstated as the only way to get these crucial ferry routes back running safely.”

P&O Ferries had planned to return its vessels to service in around 10 days after replacing the crews, but the company and its vessels have come under scrutiny from government and regulators, with a focus on the safety implications of sailing large ferries across busy shipping lanes with new crews.

These articles were originally published by Seatrade Maritime News.