Ian joined Informa (formerly UBM) in 2018 as the Editor of SHP. Ian studied journalism at university before spending seven years in online fantasy gaming. Prior to moving to Informa, Ian worked in business to business trade print media, in the automotive sector. He was Online Editor and then moved on to be the Editor of two publications aimed at independent automotive technicians and parts distributors.
August 29, 2019 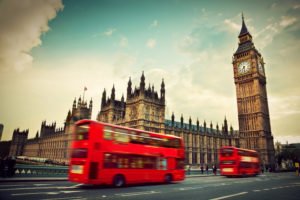 Unite puts the revelations down to combination of drivers working excessive hours, due to ‘inadequate’ levels or pay, ‘poorly scheduled’ shifts leaving a lack of recovery time and ‘overly long shifts without sufficient rest breaks’, as contribution factors in causing fatigue.

TfL has responded to the report by putting in place a plan that requires operators, who are awarded new contracts after the summer of 2020, to demonstration that they have a robust system in place to tackle fatigue. But Unite says this plan needs ‘beefing up’.

‘TfL’s commitment to provide £500,000 of funding for bus operators to put forward new ways to tackle fatigue, is welcome but this must include proper engagement with the drivers themselves, through Unite’, it says.

If a bus route is less than 50km, current UK bus driving rules say that workers can drive a bus for a total of 10 hours a day with an unbroken five and half hour stretch behind the wheel, before getting a 30 minute break. While workers are normally legally entitled to 10 hours rest between shifts (which does not include travelling to and from work) this can be reduced to just eight and half hours three times a week. Bus drivers must have at least one day a week off each fortnight. 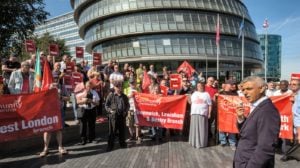 Photo courtesy of Unite the Union

The report has been published on the back of lobbying from Unite and, in response, the trade union staged a demonstration to highlight the excessive house being worked by bus drivers on Thursday 29 August at 10:30am at London’s City Hall.

Unite Regional Officer John Murphy said: “While Unite recognises that the Mayor has done the right thing by commissioning this research, and we believe that TFL has taken the right turning, the journey of travel currently appears to be too slow.

“TfL must take decisive action and force bus operators to stop flogging their workers to the point of exhaustion. The safety of the general public and workers is being placed at risk because of fatigue being suffered by London bus drivers.

“Unless TfL’s proposals for a fatigue reporting system are given real teeth it will make little difference.

“The low pay culture is a fundamental source of fatigue. No one wants to work long hours, but drivers are forced to do so to make ends meet.

“To tackle low pay across the board TfL needs to be establishing London wide pay rates for all drivers.

“Fatigue is not going to be tackled unless the standard five and half hour shifts without a break are ended and shift patterns allow drivers adequate time to recover.

“The establishment of a fatigue reporting system must include all key players including unions, in order for it to be credible and beneficial to drivers.”

#SafetyMatters | Mayor of London @SadiqKhan spoke to bus drivers who staged a protest today at City Hall over the long hours culture that is creating chronic fatigue among the workforce – https://t.co/N7cABBTILF pic.twitter.com/W3pgki4oja