Dr Helen Beers is the Technical Team Lead for the HSE’s Foresight Centre.  The Foresight Centre, based at the HSE’s Health and Safety Laboratory, helps the UK government, organisations and businesses to prepare themselves for occupational safety and health of the future.  Helen’s work focuses on demographics.  She has a PhD in Health Psychology and prior to joining HSL worked within the health, education and finance sectors.
November 8, 2016

The influence of artificial intelligence on future skills

Helen Beers, from the HSE’s foresight centre, explores what influence Artificial Intelligence (AI) has on skills required for the future and which tasks AI is unlikely to replace.

The team at HSE’s Foresight Centre help UK government and businesses to understand what the future working world might look like, and how they can best plan for it.  This article is part of series on Artificial Intelligence (AI) and its influence on occupational safety and health.  It focuses on what skills are required for a future working world containing greater levels of machine intelligence, and considers which types of tasks are best done by humans. 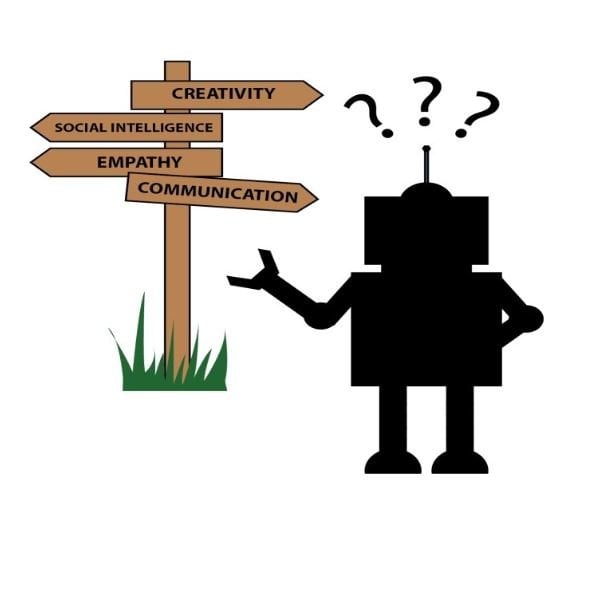 Advances in technology (such as the pace of change in AI systems) are likely to disrupt the way work is currently done, meaning that workers will need to be flexible; adaptable; resilient; culturally sensitive; competent to work across multiple disciplines; able to collaborate virtually, and respond to continuous change – quite a tall order!

In addition to the type of skills required for the future, technological change will also drive the level of skills that are demanded.  For example, in 2012 the European Centre for the Development of Vocational Training estimated that almost half of new job opportunities in the European Union will require highly skilled workers.  They also forecast that at all skill levels, most of the jobs in demand will be characterised by non-routine tasks which are not easily replaced by technology or organisational change.
In the future, it’s likely that demand for educated workers, along with skills which complement machines, (for example, creativity and social skills (such as persuasion), communication, cultural sensitivity and empathy), will keep rising.  It will be the combination of humans working together with AI that is likely to bring most benefits to the future world of work, so workers will need to develop skills in interacting with the technology.  In addition, as computer controlled systems become more widespread, people will need to develop different skills in how to identify any issues in them.

When attempting to identify skills required for work in the future, we should ask ourselves what humans value most highly from other humans (for example skills such as social intelligence and creativity).  We also need to ask what humans are uniquely good at.  There is little point asking about what computers can’t do, as we are unable to predict this.

Tasks requiring impartial decision making and the ability to identify trends in big data (such as those used in detecting fraud) are now becoming more automated.  Other tasks more likely to be vulnerable to automation are those that are routine (both manual and cognitive).  This automation of greater numbers of tasks is likely to raise the value of those tasks that can only be carried out by humans.

Tasks such as those requiring creativity or social intelligence; tasks that require tacit knowledge of social and cultural contexts, originality, and subtle judgements and interactions will be difficult to automate.  For example, finding ways to help or anticipate the needs of others (service orientation), uses implicit knowledge and judgement (which are hard to translate into explicit computer code).  Hence, if a job contains high levels of originality, combined with a high level of interaction with other people, it’s unlikely to be automated.

Tasks that require perception and manipulation skills (perceiving and interacting with unstructured physical environments) are also challenging to automate.  For example, whilst humans can distinguish between different types of dirty object (e.g. that soil in a plant pot is not necessarily dirt to be cleaned), a robot will not.  So, in the near future, AI is not anticipated to replace tasks requiring a high level of perception and manipulation.

Gradual improvements in AI may reach a point where machines are able to perform tasks previously only done by humans (e.g. self-driving cars may be able to replace taxi drivers in some controlled areas).

Lifelong education and learning will become increasingly more important for the future workforce (in much the same way as numeracy and literacy increased in importance as agricultural work was overtaken by factory jobs).  The world of work remains complex and continues to change.  Our challenge at HSE’s Foresight Centre is to keep pace with these changes and to anticipate future possibilities.  This intelligence will support HSE, industry and the wider health and safety system, to prepare for future health and safety challenges and set priorities for research on occupational safety and health (OSH).

The extent to which AI could impact on OSH in the future is considered in the next article in this series.

The influence of artificial intelligence on future skills Helen Beers, from the HSE’s foresight centre, explores what influence Artificial Intelligence (AI) has on skills required for the future and which
Helen Beers
SHP - Health and Safety News, Legislation, PPE, CPD and Resources

The influence of artificial intelligence on future skills – AI Update