SHP debate: The impact of Brexit on OSH and FM 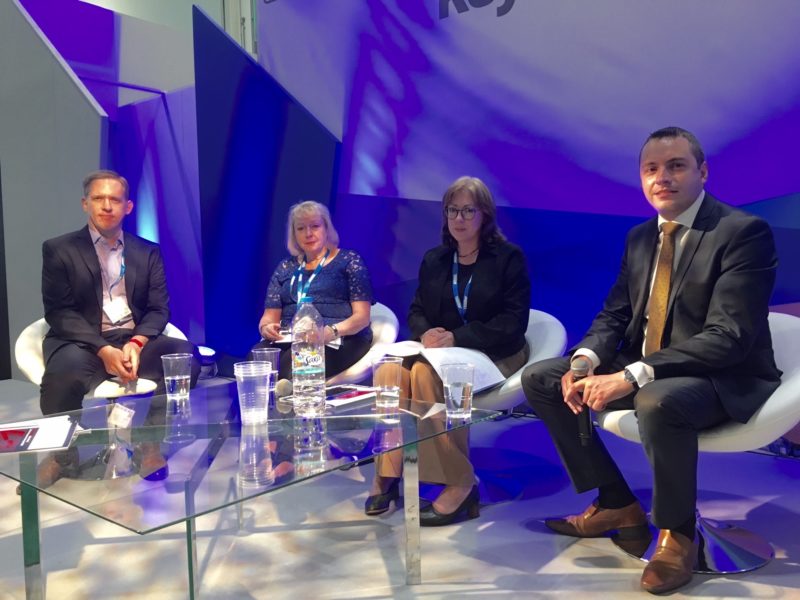 Four experts gathered at this year’s Safety & Health Expo to talk about their opinions on Brexit in OSH and FM. Looking at what they believe will happen in the long and short term, which regulations they would scrap if they were in charge, and giving their thoughts on the next steps, Paul Almond, Lyn Dario, Jonathan Hughes, and Joanna Lloyd-Davies FBIFM, presented a fantastic debate into the complex world of Brexit.

I have recently led a team and we finished a project on the changing legitimacy of health and safety from 1960 to the present day, which was funded by IOSH. I tend to look at Brexit as a policy and political process and we have to recognise that whatever doubts we have about the practicalities of the short term – it is a policy window, with the realm of opportunities for policy making changing dramatically. And, in periods of change we need to think about whose voices are going to be influential in shaping the way we are going and also what the expectations are going to be about the direction of travel. Like so many things to do with Brexit I think the answers for now are fairly unclear.

The Sentencing Guidelines are contributing to a change in the patterns of the outcome we see in a very narrow 1% of 1% of serious breaches that are prosecuted in court. At the top of the pyramid there is a very significant movement towards much heavier fines and much more significant penalties being levied. It is complicated and takes into account a number of things on the risk factor matrix; the gravity of the breach, the number of people killed, affected, or harmed – the culpability (knowing, lawful, reckless) and so on – giving a matrix grid of options and sentencing is worked that way.

The DSE regulations is one that is mentioned regularly. They are from a pre-tablet, pre-smart phone era so there is a lot of pressure on that piece of legislation in terms of its relevance and its up-to-dateness now. It may be that Brexit gives an opportunity for that to be reviewed. The Brexit white paper, or the Great Repeal Bill that was in the Queen’s speech – said that the government is going to roll all legislation and all directives in UK law that come from Europe, into UK law. The DSE regulations are not one of those Acts, it says in the preamble that (the regulations) are made by the Secretary of State under the powers of Section 15 of the Health and Safety at Work etc. Act 1974. It’s UK law already – so it’s not going to be on the hit list of pieces of legislation that get rolled over and subject to changes anytime soon. It’s already in UK law, and the same goes for the Management Regulations and the PUWER Regulations – they are all made under the 1974 Act so they are not going anywhere. It may well be that they are on this list to be looked at some point in the future.

On Brexit next steps:

I was looking at some statistics from the Houses of Parliament and they said there’s 11,00 EU Directives and 8000 Statutory Instruments that implement European Union based legislation into EU law – 8000! That’s a tsunami of law to review and reform. If each of those piece of legislation gets a two-hour discussion in parliament that’s a 4/5 year parliamentary turnover, just talking about regulations – that’s not a lot of thought or scrutiny put into something like DSE. So, any change that’s going to happen is going to be way, way, way down the line. The opportunity for things to change in the short term is really quite restrictive.

In the long term I don’t think Brexit will make a vast amount of difference to health and safety standards in this country. The government are still so wound up about financial services that it hasn’t got around to anything else on the regulatory side. Its first concern will be how the financial services sector is impacted then they will get onto things like health and safety further down the line.

I am old enough to remember the six pack coming in in 1992 – what I would say is that while we have a lot of specific legislation coming in from Europe, fundamentally wherever there is a breach 9 times out of ten the HSE still falls back on the Health and Safety at Work Act 1974, because that is still the bedrock. It’s still the key piece of legislation that regulators will use because it sets aspirational standards – it says you have to keep people safe, and if you haven’t taken reasonable steps to keep people safe then you’ll be in breach and you can be prosecuted.

Section two and three of the Act puts the onus back on you to prove that your systems were sound enough and prove that you’ve done everything reasonable – so for all of these reasons I think that Brexit won’t have a huge impact on health and safety standards.

I don’t think there’ll be any impact at all for the next five to ten years. I think the British overnment has enough to be getting on with rather than worrying about environmental and health and safety legislation. It will be an opportunity to review and revise some regulations previously constrained by European Directives, for example DSE regulations 1992. If we think about laptops, smart phones, ipads etc now – and what things looked like in 1991 when the regulations were produced. The workplace has moved on immeasurably since then – and where we have been constrained in the UK to fit those regulations – hopefully post Brexit we will be able to make those changes freely.

The HASAWA is where the majority of the High Courts fall back to. Health and safety regulation in this country has been around for over two centuries so I don’t imagine any government, of any political persuasion, would want to put themselves in a position where they would have to scale back from the position we are already at, with long fought, hard earned rights and regulations – why would any government want to make that worse?

On what legislation should be repealed:

CDM 2015 – the duties for clients for the domestic market. This is a great example of where a European Directive tied the HSE up to do something I don’t think it wanted to do. They had to update the previous CDM Regulations to conform with the Directive and in doing so implemented the requirement for domestic clients to take responsibilities. I think it’s grossly unfair that Mrs Miggins at 80 years of age decides to have a downstairs toilet put in her garage extension now falls under the scope of CDM. It’s totally outrageous. The HSE have made a public statement that they have no intention of going after or prosecuting domestic clients, so why have it in the law anyway? Hopefully post Brexit these types of decisions won’t be forced upon us.

There’s a lot to be sorted out. One of the most important impacts is that of Europeans working here who may not be able to stay longer term. How are we going to replace those skills, and replace so many people in short-term, low paid occupations – perhaps we need a complete rethink?

On opportunities for the FM sector:

I really believe that having been the centre of excellence in the UK for so long (although the Danes are now better than us) we can use this to put us in the number one spot again.

I think we have to focus on the best thing, the right thing, something that can be exported so we can actually sell our services and show we can make a difference. We have got the intellect to do it – we just have to get on with it, forget the recession of 2008, forget everything that’s happened in the meantime and go forwards. It’s up to us to do it.

Listen to the 'Wellbeing by numbers' webinar on-demand
SHP debate: The impact of Brexit on OSH and FM Four experts gathered at this year’s Safety & Health Expo to talk about their opinions on Brexit in OSH and
Lauren Applebey
SHP - Health and Safety News, Legislation, PPE, CPD and Resources

I am not at all sure that the comments on CDM and “Mrs Miggins” has read and understood the regulations. Whether 80 years of age or otherwise, most of the clients duties when they relate to domestic clients are t be carried out by the contractor, principal contractor, or principal designer. The exception is where the domestic client controls the way in which any construction work is carried out by a person at work and then only to the extent to which they are within the domestic client’s control. False narratives were the bane of the referendum campaign and they… Read more »

False narratives should be challenged, but similarly to Brexit, many of those false narratives have been established through 40 years of repetition, so where do we start? Despite being debunked on numerous occasions and featuring in HSE’s “Myth of the Month”, the “Conkers, Bonkers” story still rears its ugly head from time to time. All H&S legislation, irrespective of its origin, is enacted into UK law via HASAWA. THe UK HUman Rights Act was debated in both houses of parliament and passed into law. The opportunity to “edit” EU laws prior to acceptance into UK law,does not apply to these… Read more »

I am inclined to think that workplace safety regulations made under HSAWA would not be greatly affected by Brexit, but the effect on Product Safety Regulations covered by the 22 CE Marking Directives would be profound. They cover consumer electrical goods, machinery, PPE and gas appliances and many other important fields. These regulations are made under European Communities Act and use EN standards and assume that they are applied in EU member states. The CE marking regs cannot work outside the EU as they stand. This could have profound effects on consumer and workplace standards and could impose severe burdens… Read more »