Ian joined Informa (formerly UBM) in 2018 as the Editor of SHP. Ian studied journalism at university before spending seven years in online fantasy gaming. Prior to moving to Informa, Ian worked in business to business trade print media, in the automotive sector. He was Online Editor and then moved on to be the Editor of two publications aimed at independent automotive technicians and parts distributors.
November 5, 2018

Eight children were hospitalised after an inflatable slide collapsed at a fireworks event on Saturday night. 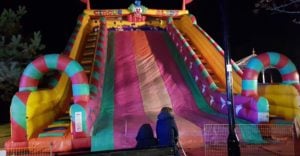 An investigation into the incident is underway after the children fell from the slide at Working Park in Surrey.

In the immediate aftermath the children were reported to have ‘potentially serious’ injuries.

A major incident was declared, the park was evacuated and the fireworks display cancelled to allow the air ambulance to land.

Seven of the eight children, who are all under 16, were discharged from hospital later that evening, with the eighth kept in for observation.

Their injuries were later described as ‘not believed to be significant’.

Following inflatable slide incident @WokingFireworks last night, we're pleased to say 7 of 8 injured were discharged from hospital overnight. 8th victim kept in for observations, but injuries not believed to be significant.@H_S_E will now investigate.#Woking

The HSE is currently investigating to identity what happened, with some eyewitness reports saying that the side was overcrowded at the time of the incident and that the children fell from the top. 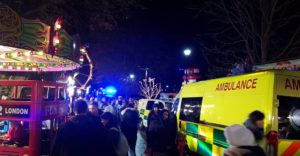 The slide, when fully inflated, reaches a height of around 30ft.

Melvin Sandell, Senior Consultant and Expert Witness at Finch Consulting Ltd, who is formerly the HSE’s Operational Lead for Fairground and Theme Park Safety, told SHP: “Both of the HSE recognised fairground equipment inspection schemes require that inflatable play equipment like this slide, be designed, built, tested and operated in accordance with BS EN 14960.

“Not many standards are so comprehensive in scope and I can’t recall an accident involving an inflatable where non-compliance with the standard didn’t play a part. It will be interesting to see what comes of HSE’s inevitable investigation.”

Woking Fireworks tweeted at the time: “We are all very shocked and distressed by events in the funfair this evening. We are focussing in assisting the emergency services in dealing with the injured children.”

A ‘full review’ is underway, it added.

Woking District Rotary apologises for the short notice cancellation of the Fireworks Extravaganza, caused by a serious accident which occurred in the funfair area during the build up. Our thoughts are with the children injured and their families. We will carry out a full review

Listen to the webinar for free

Inflatable slide: Eight children injured at Woking fireworks display An investigation into the incident is underway after the children fell from the inflatable slide at Working Park in Surrey.
Ian Hart
SHP - Health and Safety News, Legislation, PPE, CPD and Resources