Two men are in hospital in New York after falling around 20 feet off scaffolding on Manhattan’s 101 storey Hudson Yards development in New York on Saturday. 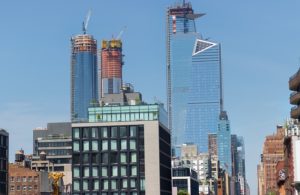 A scaffolding malfunction caused a window cleaning platform, from which two men two men were cleaning windows on the 50th floor of New York’s 30 Hudson Yards, to drop 13 floors, before coming to a sudden halt. This jolted the men from the platform, and they fell between 15 and 20 feet further, before landing on a terrace on the 35th floor.

Because of the size of the building and the height they were at, emergency services struggled to reach the men, one in his 20s and one in his 30s.

Rescue workers were forces to cut a hole in the 37th floor in order to access them. They were taken to Bellevue Hospital and are in a stable condition, one suffering serious injuries and the other, minor injuries.

The incident happend on Saturday 14 November.

A Fire Department Spokesperson told the New York Post that the scaffolding “malfunctioned and collapsed” and that the two storey drop was a “substantial fall.

The men had their fall broken by a wooden, shed-like structure, the spokesman continued: “Storage shed, I think it was a storage shed, broke their fall.”

It’s just over a year since four workers suffered minor injuries when scaffolding collapsed during the construction of the devolvement.

Wholesalers fined £120,000 for failings that led to fall