Safety in the sun: international standards 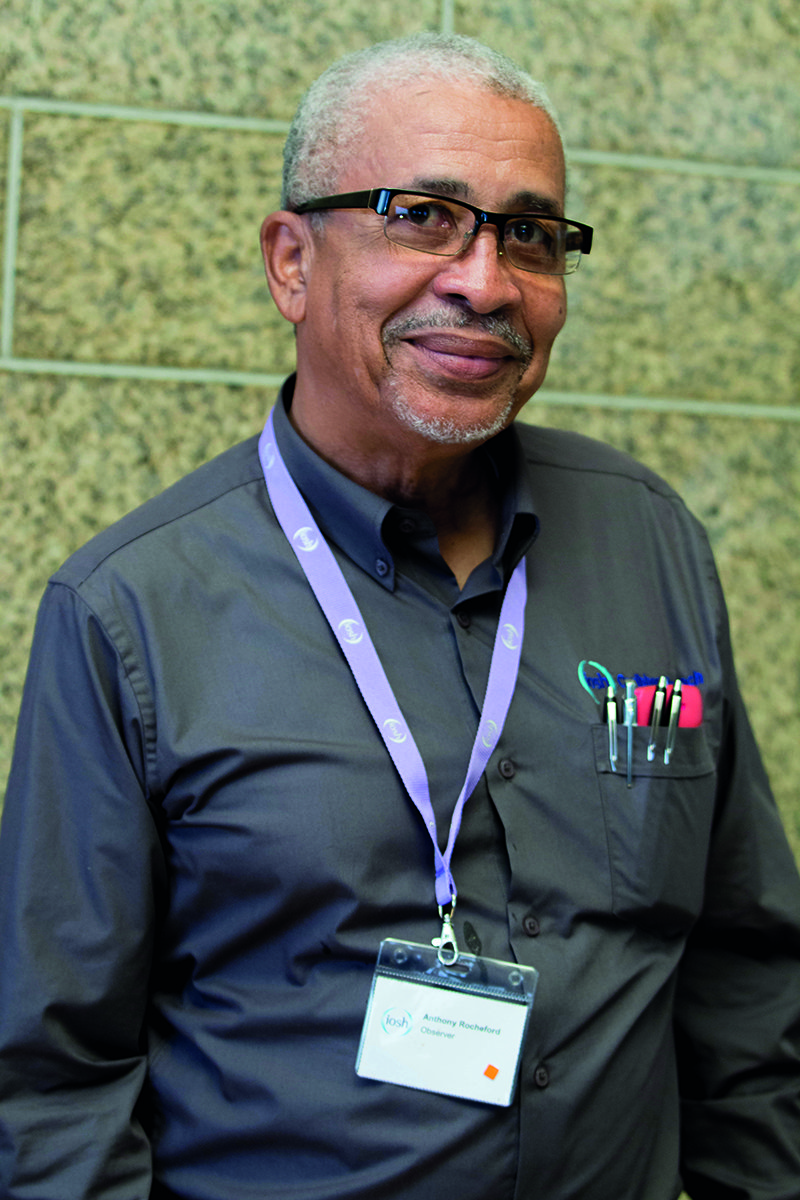 Marcus Boocock attended an IOSH-hosted conference in the Caribbean in February to discuss a new international standard to protect people in work. While there he met Caribbean branch member Tony Rocheford, who reflected on 30 years of health and safety progress.

It was the death of a colleague, crushed under an overturned tractor, which proved a watershed moment for Tony Rocheford.

Following the tragedy, Tony was determined to find out what could be done to prevent such a horrendous accident from happening again.

At the time he had been working as a supervisor for a large construction firm in Barbados. The operator who was killed was a familiar face; he had taken Tony to school when he was younger.

Tony pinpoints the accident as the moment when he realised he wanted to make a difference and ensure people are kept free from harm at work in his native Barbados, the rest of the Caribbean and elsewhere in the world.

“That was a traumatic event that forced me into trying to see what we could have done to stop that type of accident from happening,” he says. “It forced us into designing a way for tractors to get onto loaders. So we designed ramps and similar methods. That was my first introduction into safety unofficially.”

Time for change
Fast forward more than three decades and a great deal has changed. Tony is a safety management specialist with BAG Consulting, a role that enables him to oversee health and safety across the entire Caribbean.

He is also part of the executive committee in IOSH’s Caribbean branch, which has grown rapidly over the past decade since it was set up. Today, it has more than 140 members across the Caribbean islands, many, like Tony, based in Trinidad.

Reflecting on the past 30 years, Tony is proud that huge advancements have been made in protecting people while they are at work in the area.

When he first joined the industry in the early 1980s, Tony found that keeping staff out of harm’s way was not necessarily top of the agenda for many firms.

His colleague’s death on the construction site was not an isolated incident. Such incidents were an all-too-familiar occurrence. Equally concerning was that while the safety of workers was not being taken seriously enough, health issues – such as exposure to solar radiation – were even lower on the list of priorities. 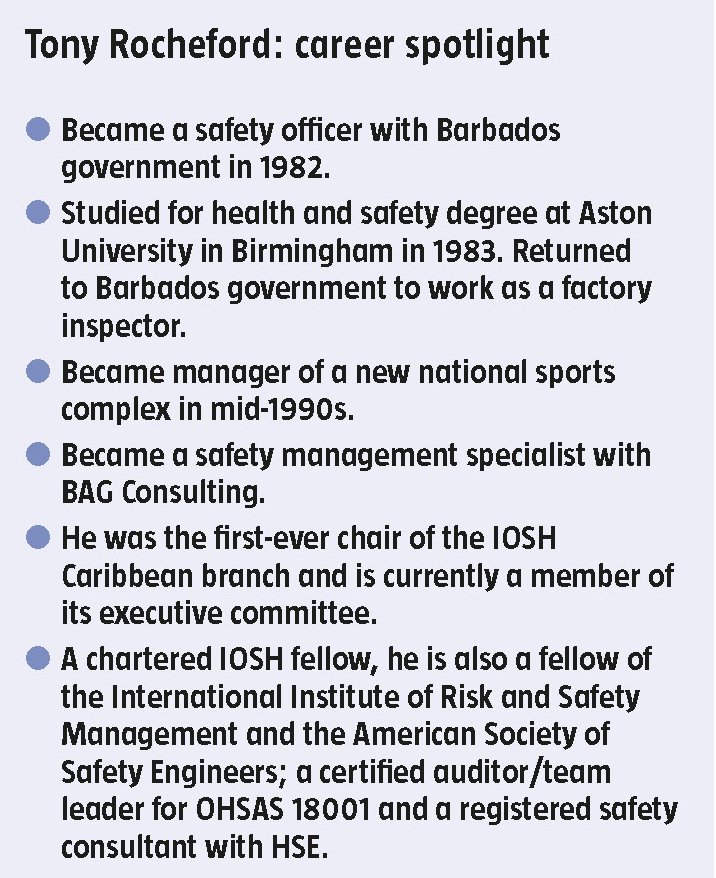 Thanks to the hard work of IOSH Caribbean branch members like Tony, significant safety improvements have been made.

“Because of the number of people who were getting injured, the whole focus on safety became significant. We had to see a change and that is what has happened,” he explains.

“But we do not want to rest on our laurels. We want to protect people in the workplace and there is more that can be done.”

One of the biggest advances in the Caribbean has been the introduction of the Barbados Health and Safety at Work Act, he says. This covers workers in a whole range of industries and replaced the much-more restricted Factories Act.

He also believes companies are now more likely to seek help when it comes to health and safety training from bodies such as IOSH as they no longer fear prosecution.

“Under the Factories Act, it was just factories and related industries that were covered, which was far too limited. Under the Health and Safety at Work Act, we have a situation where all workplaces are covered,” he explains.

“This is a really big step. This means now that things like repetitive strain injuries, muscular-skeletal disorders and stress have become viewed as work-related injuries and illnesses. Before, this was not the case.

“This is an important advancement. People are much safer now at work than they were ten years ago and that is because of the new legislation. The governments in the region have been forced to step up to the plate to make this happen.” Tony is pleased that most Caribbean islands recognise that stress can be brought on by working conditions.

“Before we had a situation whereby stress was your problem; it was considered that you got stress from home and nowhere else,” he continues.

“But now we recognise that the job environment and job situation and the fit of persons into the work environment can cause stress.

“One of the things that creates stress more and more is restructuring, reorganisation and retooling. This reduces the number of workers who can do the same amount of work with the same technology and a failure to recognise that this can bring about a work overload. This is leading to more absenteeism, less productivity and more work-related injuries.”

Work in progress
Working in health and safety in the Caribbean is different to many other places. Tony admits it is not easy, and that historically many barriers have prevented action to reduce accidents and health risks.

One is Mother Nature. The Caribbean is no stranger to hurricanes and the devastation that they cause. New approaches have been adopted to limit the number of injuries and deaths.

“Hurricanes can be a problem, as can the flooding that is brought about by them. They are now taken into account when planning construction projects as buildings must be able to withstand them. We have building codes which are followed to make sure this happens,” he explains.

“We also ensure that when damage does occur we have the ability to respond quickly to aid the victims and get everything cleaned up.”

One of the main challenges is the fact that the region is comprised of so many islands. The IOSH Caribbean branch has found it difficult to host meetings but thanks to video conferencing, it has been able to overcome this challenge.

An additional challenge is the rich diversity of cultures scattered across the islands.

Barbados has only had English colonisation, while St Lucia had French and Trinidad had French, Spanish and English. This means that getting everyone to work together in the same way has proved to be quite challenging. But steps have been made to overcome this.

“We are divided by water. Cultures do differ across the region. This means that not all governments are committed to health and safety in the same way. This does make it a challenge when it comes to getting everyone working in the same way,” he says. “But we have worked closely with the International Labour Organization (ILO) to bring health and safety policies together, which has been a success.”

The most recent meeting to discuss the standard was held in Trinidad, and Tony sat in on one of the several task groups which examined its different clauses.

International delegates attended the five-day event, which was hosted by IOSH at the Hyatt Regency hotel in Port of Spain, to examine the latest draft of the standard, known as ISO 45001. It is envisaged that the standard will be complete by October 2016.

Tony believes it will make a huge difference, both in the Caribbean and globally. “It will enable us to provide more support for people across the region. It will also add a level of professionalism to the safety industry,” he says.

“Having the new standard will mean that for the first time all of the Caribbean islands will have one set standard that they can work towards.”

Once it’s published, Tony hopes the Caribbean can move towards a situation where all companies have health and safety experts who have received full training.

“We have still not got to that stage yet where employers recognise that membership of a professional organisation such as IOSH is invaluable. We still find that companies have safety officers who are not fully qualified or competent in the area of safety, which is a worry,” he confides.

“With the new standard, I believe that the IOSH Caribbean branch can provide support to ensure that this happens in the future.”