Brexit and the sentencing guidelines: what’s next for OSH?

On the 28th  February the Westminster Legal Policy Forum, part of the Westminster Forum Projects (WFP), came together to look to the future of occupational health and safety enforcement after Brexit.

Here is what happened. 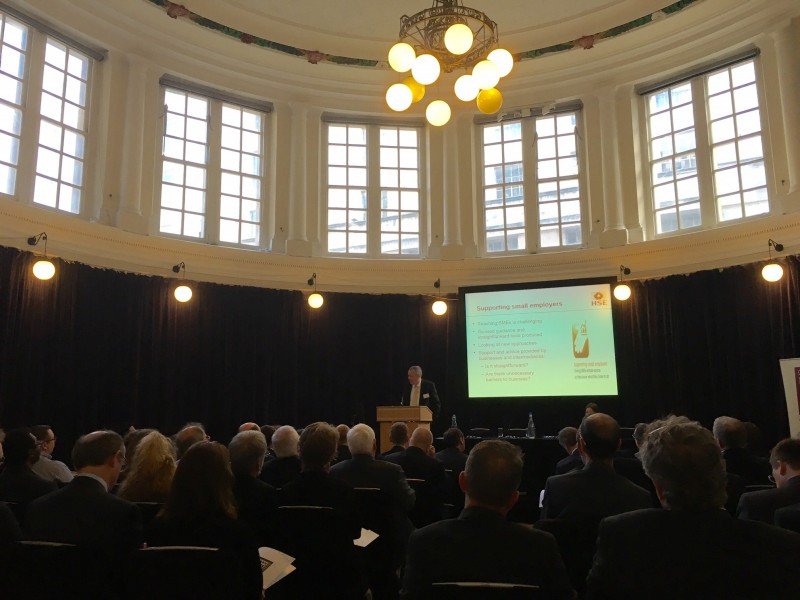 The day explored the potential impact the Brexit vote will have on the UK’s health and safety regime, and its current obligations under EU law – including options for future adherence to key European directives, possible implications for standards and enforcement frameworks, as well as the challenges and opportunities it will bring about for maintaining the global competitiveness of UK health and safety expertise.

The sentencing guidelines, one year on, was also discussed at length – as well as a detailed look at the on-going ISO 45001.

With standing room only there was a full audience with invited attendees including Members of both Houses of Parliament, senior government officials involved in this area of public policy, stakeholders working across the health and safety sector – including regulators, local authorities, business groups, unions, lawyers, consultants and academics.

Talking of the research he has carried out, Professor Almond looked at change and how it has taken place over the history of OSH. He mentioned the current changes and challenges we are facing, namely Brexit, sentencing and health.

On Brexit he spoke of a ‘significant undertaking’ that may be needed post Brexit – concerning review and debate. On the idea of deregulation and the removal of red tape he added that perhaps “there isn’t as much of an appetite as some of the Brexstremist’s vocabulary might suggest.”

When asked how long this process may take, Professor Almond said honestly that he isn’t sure, and he doesn’t think anyone is very sure. “It hasn’t been done before” he said “it’s potentially a staggering amount of work”.

On sentencing reforms he spoke of the complicated matrix surrounding the culpability, harm and turnover looked at by the courts when deciding on an applicable sentence.

Finally, looking at the key topic of health, Professor Almond referred to an interview with John Locke, HSE’s first Director General, in 1975. Mr Locke had said then that he wanted to give health the same priority as safety, which  demonstrates that making health a priority isn’t new, Professor Almond said.

“The problem people find with health” said Professor Almond “is that it is not a quick and easy win.”

Michael Mealing, Chairman, Employment Policy Unit, Federation of Small Businesses said: “We see the post Brexit situation as an opportunity. What we seek to do in the future – and this is a process that will take time – is to improve the regulatory experience for small businesses. We see blue tape as a danger, which may see small employers going beyond what is actually required by law. We are anticipating the review of the intervention scheme from the HSE – what we want to see is a transparent approach where the regulatory authorities are more supportive, rather than acting as policeman.”

On Brexit Mike Appleby, Solicitor and Partner, Fisher Scoggins Waters, said: “I don’t see in the short term or medium term that much will change with the way we regulate health and safety.”

On the sentencing guidelines Mike added that the court have been asked for the first time to look at risk. “Judges now have to go through a process of looking at risk, harm and culpability.

“What I have found is that when things go wrong there isn’t just one reason. What worries me is whether a criminal court can look at risk this way. I am not sure that this process now is helpful.

“There is now more of an emphasis on individuals. It can be a life changing event for individuals having a case hanging over their head. What concerns me is that those that regulate may not really understand how each company works or the role of the individual. We all, with hindsight, have 20/20 vision – but is that the right way to prosecute?”

“At Sainsbury’s we have 200,000 employees – and we cannot supervise all of them all of the time. In a business like ours we would be looking at hundreds of thousands pounds in fines. I am not sure that is fair.

“I feel we are bringing up a generation who don’t understand risk and think the public perception of risk is not helpful. There is a shifting of burden of cost onto business. This is OK if we get credit for this, and I’m not sure we always do.

On Brexit Neil added: “ I don’t think there will be a sea change around Brexit. What I would caution is that we can’t throw the baby out with the bath water. We have some great regulations and we want to keep those.”

Brett Dixon, Vice-President, Association of Personal Injury Lawyers asked if Brexit will help or hinder health and safety. Brett said: “I think the risk is that the improvements that have been made will be lost. The Great Repeal Bill is meant to give back control, and EU law will be transposed into domestic legislation.

“This will force Britain to be competitive and look at deregulation. The HSE will have a crucial and heavier workload.

“Brexit is a real risk and we need to be very careful about what happens post Brexit.”

Guest of Honour, Philip White, Head of Operational Strategy, Health and Safety Executive spoke about the significance of the 1974 Health and Safety at Work Act and the significant reductions in injuries and ill health over the last 40 years. But said: “we could be better, as there is still some way to go in many areas, particularly the health agenda”. 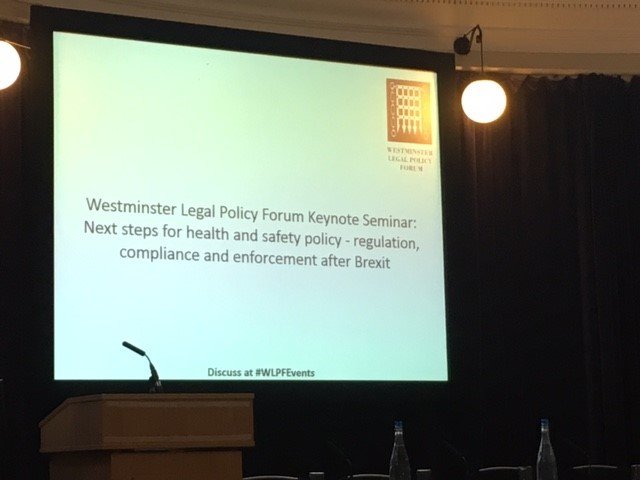 On Brexit Mr White said that there are no immediate consequences for how HSE works and regulates; naming the three areas of EU activity as social policy, environmental and human health protection, and the single market.

When asked how chemical safety legislation, such as REACH and CLP will be affected post Brexit, Mr White replied: “At this stage all I can say is yes, we have had a look at the resources and the implications of that – but it is just too early to say how things will pan out.”

Referring to Professor Almond’s comment on health Mr White said that health has always been a priority for the HSE, something he has seen in practice in the 30 years he has worked there.

Dr Karen McDonnell, Immediate Past President, Institution of Occupational Safety and Health (IOSH) spoke about the upcoming Standard ISO 45001, as IOSH has been a category A liaison body, in forming the new standard.

She began by looking at the global toll of 1 death every 15 seconds across the world because of health and safety failure.

The new standard hopes to align standards around the world, with Annex SL identifying common clauses, common terms and common definitions. “It’s about underpinning everything with a common understanding, one high level structure” Karen said.

“The new standard’s main characteristics are around a plan-do-check-act process. The standard aims to minimise harm and to integrate health and safety.”

Looking at where ISO 45001 stands now Karen said that there will be a public consultation between May and June.

Listen to the 'Wellbeing by numbers' webinar on-demand
Brexit and the sentencing guidelines: what’s next for OSH? On the 28th  February the Westminster Legal Policy Forum, part of the Westminster Forum Projects (WFP), came together to look
Lauren Applebey
SHP - Health and Safety News, Legislation, PPE, CPD and Resources

What about CDM Regulations 2015, what change will happen if any? Our business is based on the current format of the regulations and aimed at the Domestic Construction Industry,

A good number of us would love to see the HSE use their god-given gift of reason and revert back to the old regs with the integration of design risk management emphasised a bit more. The 2015 regs are soooooooo politically minded so as to avoid a huge EU fine, they’re practically worthless in their current form vs the old regs in terms of practicality and reducing bureaucracy, particularly for the targeted small projects. Change of business strategy isn’t likely to be an issue with changes for the CDM Regs even if they change (they should be reviewed next year).… Read more »

There is also the CE marking legislation which concerns supply of products to consider. There are 22 CE marking Directives and Regulations implemented into UK law at present. They concern supply of many types of products, both consumer and industrial. Although a CE marking is perceived as a safety marking it is actually a free trade marking to allow unrestricted trade with other EU countries by ensuring that the same levels of safety are applied throughout the EU. If we leave the EU and customs Union, CE marking will no longer have any legal status or function in UK unless… Read more »

Virtually nothing will change. CDM2015 is the biggest target for change for many post-Brexit but generally not much is likely to change except legal references.

….although there will be the vultures out there (consultants, lawyers, etc) who will pray on the naive, uninformed and ill equipped for a big pay day. Mark my words on that.