Ian joined Informa (formerly UBM) in 2018 as the Editor of SHP. Ian studied journalism at university before spending seven years in online fantasy gaming. Prior to moving to Informa, Ian worked in business to business trade print media, in the automotive sector. He was Online Editor and then moved on to be the Editor of two publications aimed at independent automotive technicians and parts distributors.
June 20, 2019

Arguably one of the best-known rugby players in the world Jonny Wilkinson CBE, who famously kicked the drop goal that won England the 2003 World Cup with just seconds left in the final, discussed how his success on the field has taken its psychological toll in a packed Keynote Theatre on the final day of Safety & Health Expo 2019.

Jonny greeted the arena, thankfully making it out without tripping over (more of that later) by saying “I’m here to talk about something that is really important and powerful to me personally and one of the most important things in the world, mental health & wellbeing.”

Much of Jonny’s success on the field, and he’s had an awful lot of it – including four Six Nations titles, becoming the highest points scorer of all time and winning the World Cup with England, took its psychological toll. Throughout his career, Jonny has dealt with depression, anxiety and panic attacks.

Growing up, Jonny was a self-confessed obsessive. “Everything I did, I did to the full. I loved Rugby and even from a young age, was driven by wanting to know exactly what I was capable of.” Jonny recounted how, despite being such a tender age, he started to write goals. He wanted to play rugby for England.

This was around the time of the inaugural Rugby World Cup in 1987. From then on, Jonny set out to win the World Cup. He decided at the time, “the kicker looks important. I want to be the kicker.”

He went about his early life with a huge passion for rugby, despite the knock-backs of telling a career adviser that he wanted to play rugby. Of course, at the time rugby was not a professional sport. However, around the time altercation in 1995, it was announced that rugby would become professional.

At the time, he was playing for England under18s and was encouraged by best friend Rob Andrew to go full time, by joining Newcastle Falcons. Jonny scored a try with first touch and went on to win the league in his first full season. “At a young age, I got that first taste a what it was like to be the man”.

Taking a step back from his newfound fame, from being asked for autographs and shown newspaper stories depicting his success, Jonny had a realisation that if he wanted to find out his true potential, he would have to find out who he is. “Who I am now, is the result of everything I’ve been through,” he said.

With highs, come great lows. Jonny told how he spend the four years following achieving that lifetime ambition of lifting the Webb Ellis Cup in Sydney, on the treatment table. He suffered the first of a run of 14 injures, a broken neck, in just his second game after the tournament. Thinking back to that time now, Jonny said he often gets asked how that period was.

“If asked on a good day, when I’m feeling good inside, I’ll say it was amazing. It gave me opportunities to do amazing things. However, catch me on a bad and I say it was really tough. It caused me to miss 50 games for my country and possibly the chance to be the most capped player of all time.”

At the time, as a leader in England’s only ever team of rugby world champions, Jonny was often asked by people for advice on how to go about influencing their environments. “I was influenced by the environment, yet people were asking me for how best they can influence theirs. How can I do that?” He thought. “Am I responsible for who and how I am right now? No.”

To contrast this emotion, Jonny spoke about when he was ‘in the zone’. “Everything I did was effortless, light, I felt like I could float. Sometimes I found it hard to differentiate between whether I saw the defender move or whether I had made him move.” 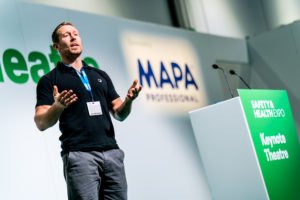 Over time, Jonny started to understand a bit more about these ideas and what they represented. He spoke, metaphorically, of how he would go out in the evening with a dinner shirt over his rugby shirt, so focused was on a particular game or his is training. He would then go home and metaphorically put his pyjamas on over dinner shirt, because he was so worried about dinner and whether he has said or done the right thing. He realised that the weight of pressure of the shirts, restricted him from living his life.

“Getting old is not about ageing, it’s about whether you are wearing the right shirt. Being in the zone is about plugging into life. Rugby was my plug and if you took rugby away, the next socket that came along, didn’t fit.”

Returning to a business analogy, “A true leader can come out of a stressful meeting, strip off the shirt of, put on a new shirt and go into the next meeting fresh. On the other hand, is the person who goes home at the end of the day ‘so stressed, had such a long day’.

“Responsibility is the ability to respond. If we get control of that response, we are proactive, and we can control the world we are in. It enables an amazing flow, accept, respond, creativity, inspiration. 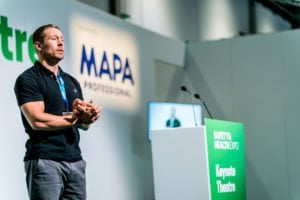 “Everything is responsible for how we think. If your mind belongs to you, the world is yours.” Jonny asked the audience to image being handed a contract for your dream job. All you have to do, before you sign, is not to think about a pink monkey for 15 seconds. “As soon as you think or are told not to do something, it’s exactly what you do.”

“A genius,” he continued, “has the power to overcome that”. He described a genius as a machine that is beautifully aligned, all works together to reach one goal. On the other hand, is a grafter, who work hard to get the job done.

“If I walked out here and tripped over on stage. Who is it embarrassing for, the audience or me? Who decides if it is embarrassing? What do I want to happen next? How do I take control of the situation? Acceptance is how we decide what happens next.

“A genius is contestably inspired. That’s what inspiration is.” Jonny recalled how in the World Cup final, there was an Australian player who kept kicking the ball. Jonny looked over at captain Martin Johnson, who was totally unphased. ‘If he kicks, we do this. If he doesn’t kick, we do this.’ He was so in control, he could deal with any situation. “A genius owns their performance.”

Before final itself, Jonny was understandably nervous, a mess. The previous night he had a dream where an angel asked him two questions. Will everything go as I want? Will people still respect me afterwards? She then presented him with a contract which, if he signed, would guarantee the result he wanted but he wouldn’t have to play the game. He said that in 95% of his games, he would have signed that contract and not played the game. But this time, he wanted to live the moment.

Subscribe to the newsletter ✉️
Jonny Wilkinson: Courage, resilience and breaking the mould Arguably one of the best-known rugby players in the world Jonny Wilkinson CBE, who famously kicked the drop goal that won England the 2003 World Cup with just seconds left in the final, took to a packed Keynote Theatre on the final day of Safety & Health Expo 2019.
Ian Hart
SHP - Health and Safety News, Legislation, PPE, CPD and Resources

Is there a difference between leadership and safety leadership, Q&A