A specialist roofing company and its two directors have been sentenced after admitting working unsafely at height on a hotel development in central Manchester during a major refurbishment and extension works.

On the 17 March 2015, a member of public witnessed and photographed unsafe work at a construction site and contacted the Health and Safety Executive (HSE).

Manchester Magistrates Court heard that the photograph showed Mr Jake Clarke, one of a pair of directors for Enviroply Roofing Limited. His fellow director, Mr Aaron Hepworth was also witnessed walking along the beam to pass something to Mr Clarke, then walking back again. There was nothing in place to prevent or mitigate a fall from this beam. 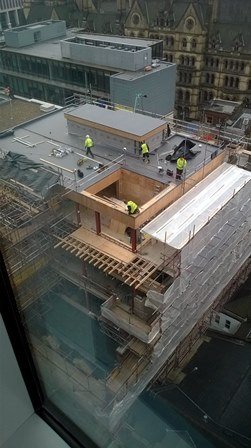 The HSE investigation discovered that there was a full time scaffolder on site who was employed to build any scaffolding required by contractors but on this occasion, Enviroply and its directors had chosen to rush the job in order to submit their invoice earlier. Mr Clarke and Mr Hepworth put their lives at risk as the fall would have been one storey and onto timber beams.

All three defendants failed to take the proper precautions to manage the risk of a significant fall from height, despite there being adequate provision on site to provide them with scaffolding and safe working platforms.

Enviroply Roofing Limited of Unit 20b, Yarrow Business Centre, Yarrow Rd, Chorley pleaded guilty at Manchester Magistrates Court to breaching Regulation 6(3) of the Work at Height Regulations 2005 and were fined £13,300 with £1160.50 costs.

Jake Joseph Clarke of Crown Street, Leyland, Preston pleaded guilty at Manchester Magistrates Court to breaching Section 37(1) of the Health and Safety at Work etc Act 1974 and was fined £1100 with £1160.50 costs.

Aaron Paul Hepworth of 1 Appleyard, Prestolee Road, Radcliffe pleaded guilty at Manchester Magistrates Court to breaching Section 37(1) of the Health and Safety at Work etc Act 1974 and was fined £2100 with £1160.50 costs.

HSE inspector Matt Greenly said after the case: “Enviroply Roofing Limited had a duty to protect any employees, even the directors, from a risk of a fall from height.

“Mr Clarke and Mr Hepworth in their position as directors recognised that their choices on that day placed themselves at a serious risk of death or life changing injury and admitted as much for themselves and their company. They only realised afterwards that running those risks in order to submit an invoice early was a very unnecessary, considering how serious the consequences could have been.

“It is pure luck that no-one was injured or killed. I would like to thank the people who reported these concerns to us as they have been instrumental in saving the lives of these men. It is hoped that other construction workers will see these cases as a warning that HSE will act robustly to concerns received and perhaps they will take a little more time to protect themselves on their next site.”

Why is the fine so low?? Considering the consequences of what could have happened; this level of fine (to them – Directors) is too small.

Is the fine really so low? If you compare it to the article ‘Building firm fined over lone worker’s trench death’ where the employer was fined £30,000 for the death of an employee, I would not consider it so low.

Finces have increased but the Court must still take into account the offender’s means to pay a fine. Hence where the offfender has limited means fines appear frugal given the gravity of the offence.