EDF Energy Nuclear Generation Ltd and Doosan Babcock Ltd have been fined £200,000 and £150,000 respectively after an employee fell through a skylight at Hinkley Point B power station and suffered ‘life-changing injuries’. 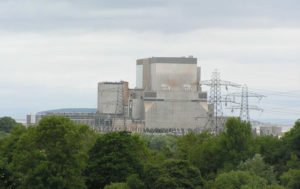 The companies were also ordered to each pay half of the prosecution costs of £36,353.84 at a hearing at Taunton Crown Court.

The firms were prosecuted by the Office for Nuclear Regulation for offences under the Health and Safety at Work etc. Act 1974, section 3(1), (in relation to EDF Energy), and the Work at Height Regulations 2005, Regulation 4(1), (for Doosan Babcock).

Both companies had previously pleaded guilty to the charges following the 2017 incident, where the Doosan Babcock Ltd employee sustained serious injuries after falling 1.6 meters through a skylight onto a cabinet, before falling a further two metres to the floor. He suffered three cracked vertebrae.

In August, SHP reported that EDF Energy and Doosan Babcock were to face prosecution after an incident, referred to at the time as a a ‘conventional’ health and safety matter and there was no radiological risk to workers or the public.

Donald Urquhart, ONR’s Deputy Chief Inspector and Director of Operating Facilities regulation, said: “The level of financial penalty in this case is not a matter on which ONR has a view. As an independent regulator, what matters to me is the safety of workers and the public on and around nuclear licensed sites, and this prosecution shows we will take robust regulatory action where necessary to ensure that those that we regulate secure and maintain compliance with the law.

Company and director fined after failing to manage Asbestos safely

How is it that 2 giants like EDF and Doosan Babcock only received a £350K fine when the sentencing guidelines starting point surely must have been £1.6mil and based on High Culpability – Level A Risk of Harm – High likelihood Category – Previous Conviction … The fine should of been closer to £4milion?

Fines – what fines? Yet again – what’s to stop them taking chances with peoples lives.

The sentencing guidelines 2016 are NOT being applied to very large companies & corporations.

EDF in particular had a number of work at height fatalities around 2010 – clearly lessons are not being learned..