Driver jailed after crashing sewage tanker while drink and drug-driving

A lorry driver has been jailed for flipping a 26-tonne sewage tanker as he drove around the M25 while over the drink and drug-drive limits. 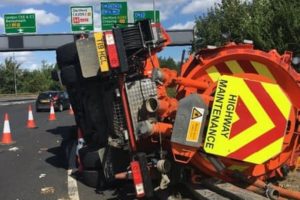 The former employers of Simon Shea have slammed the “poxy” eight-month prison sentence and 40-month driving ban handed out to him at Maidstone Crown Court for charges of dangerous driving, drug-driving, and drink-driving.

Hydro-Cleansing Ltd (HCL), which operates from Croydon but provides services across the South East, said it has been left to deal with the ramifications after Shea wrote off the £420,000 tanker by crashing it at the interchange for Junction 2 of the M25 near Dartford.

A spokesman for the company said the crash has resulted in a £900,000 deficit for the business as it had to foot the bill for the damages and costs.

The 41-year-old was said to have driven around the motorway while under the influence of drink and drugs on the morning of 28 July 2018 – culminating in overturning the tanker as he drove around a roundabout at the Junction 2 interchange.

The HCL spokesman said that Shea, of Orchard Road in South Croydon, “jumped red lights, very nearly mowed down a woman on a pushbike” and “caused a petrol tanker to swerve violently on the M25”.

The statement added: “So now, HCL once again pulls together and shows its strength, proving why we are proud to be part of it, through thick and thin. Thanks to all who have supported us through these extremely difficult times and to the members of staff who continue to do so.”

Shea was jailed for eight months for dangerous driving, with two-month terms for each of the drug and drink-driving offenses to run concurrently.

He will have to pay a £140 victim surcharge and will be required to take an extended test before having his license reinstated.