A construction firm has been fined £600,000 following the death of a workman who was crushed by a dumper truck in Edinburgh. 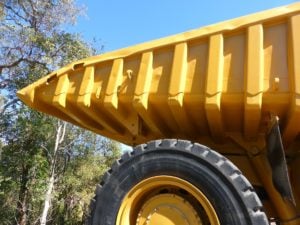 Vincent Ramsay, 55, was killed on a building site in 2016 when a dumper truck ran over him at the bottom of a dirt ramp. The father-of four had been crouching down to spray markings when he was hit.

Sheriff Norman McFadyen said the purpose of the £600,000 fine was to bring home to businesses the need to comply with health and safety legislation.

He said: “It is not to put a value on a human life and that is not what the court is doing. It is punishing the company.”

He concluded by expressing to the family his own condolences and sympathy.

The incident took place at a former bus and tram depot in Leith known as Shrubhill. Allenbuild Ltd had been developing the site for housing and the accident occurred at the bottom of a dirt ramp leading to an underground car park.

Mr Ramsay was crouched down to respray a pile marker at the bottom of the ramp when he was struck by a dumper truck.

The court heard that the driver of the dumper truck had restricted visibility because of the load of excavated earth it was carrying and had not seen Mr Ramsay.

Sheriff McFadyen said the company should have recognised there were instances where site personnel had to access the underground car park on or near to traffic routes used by trucks and should have taken measures to ensure that they were not at risk of being struck.

The sheriff accepted that the company had been in business for over 70 years, had no previous convictions and had admitted guilt at the earliest opportunity. This led to him slightly reducing the size of the fine.

Download Now
£600k fine after worker killed by dumper truck Vincent Ramsay, 55, was killed on a building site when a dumper truck ran over him at the bottom of a dirt ramp. The father-of four had been crouching down to spray markings when he was hit.
Alison Fava
SHP - Health and Safety News, Legislation, PPE, CPD and Resources