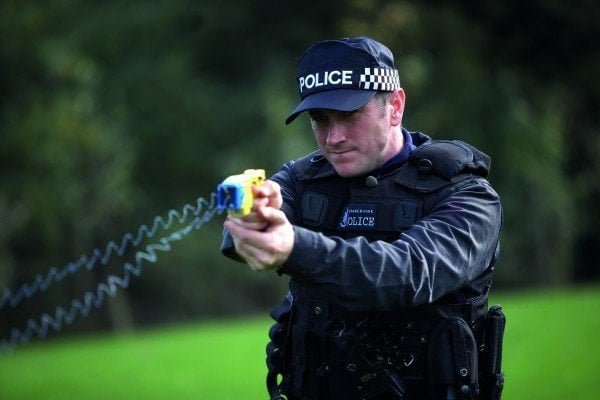 Police forces are investing in more equipment for officers to help keep them safe while they are on duty. Nick Cornwell-Smith looks at what is on offer.

Keeping people safe is one of the primary responsibilities of police officers. But what is being done to keep them safe?

Officers face many risks to their safety as they go about their daily business. The nature of their job dictates it. At any moment they could be called to attend a potentially volatile situation, where both their safety and that of the public is put at risk.

There are not many lines of work which demand employees encounter such situations. But that doesn’t mean that police officers should not be covered by a culture of care.

IOSH believes that all employees in all industries should be covered by such a culture. As in all other lines of work, staff should be able to expect to return home at the end of their shift in the same state of health that they left in.

Ensuring this happens is very challenging. It is not possible to control all risks in policing. For example, when making an arrest, the person being detained could act in an unpredictable manner.

HSE recognised this difficulty when it released its statement in 2009, called Striking the balance between operational and health and safety duties in the Police Service.

What can be done by forces is give consideration to situations that can arise. By doing this, sensible and speedy responses can be made. And if officers do find themselves in a difficult situation, then they are provided with equipment to help ensure their safety.

Traditionally of course, officers have been provided with truncheons or batons and a set of handcuffs. But as technology has moved on, this equipment has improved.

In more recent times we have seen the introduction of incapacitant sprays such as CS or more recently PAVA. Other varieties of restraints have been developed and used by some forces such as Velcro-style leg restraints. Some forces now issue spit hoods to officers to be placed over the heads of detainees who deliberately spit at police officers.

The provision of TASER has become more widespread. This is a much safer alternative to a firearm. In many cases the presence of a TASER-equipped officer is enough to calm down a confrontational situation. Having one of these pointed at someone – or being “red-dotted”, as it is known – is a deterrent to more violence. After all, no one wants to have many thousands of volts shot at them.

Then we have the new kid on the block in the realms of equipment, which is the body-worn video camera. These have been trialled by various forces.

From an IOSH perspective it is encouraging to see that this equipment is improving and that forces are happy to invest in the safety of staff, not seeing such resources as merely a cost.

Of course, having this equipment does not keep officers safe on its own. It is vital that officers are trained in the proper and correct use of equipment and in dealing with the different situations they could face.

From day one of their careers, police officers are provided with a range of training. Personal safety training, set to a national standard, provides them with the theoretical and practical skills in dealing with violent people. Training in the use of equipment comes alongside the soft skills of communication, body language and safety zones.

Unfortunately, no matter what control systems are put in place, incidents do still occur which lead to police officers getting injured. What is important is that when incidents are reported, they are treated in the correct manner and lessons are learned.

Police officers will continue to be required to put themselves in situations where their safety could be compromised. We must continue to invest in providing training and equipment which minimises the risk of them being harmed.

Click here for more information and to view this Fire Safety eBook
Police protection – keeping officers safe Police forces are investing in more equipment for officers to help keep them safe while they are on duty. Nick
Safety & Health Practitioner
SHP - Health and Safety News, Legislation, PPE, CPD and Resources

I’m all in favour of the police protecting themselves and the TASER may be effective, however, who’s protecting the public from overzealous use of TASER? I just hope they are investing just as much in hand to hand self defence, use of the police truncheon and, most importantly, psychology and how to defuse a situation verbally.