Jamie Hailstone is a freelance journalist and author, who has also contributed to numerous national business titles including Utility Week, the Municipal Journal, Environment Journal and consumer titles such as Classic Rock.
June 14, 2018

The Institution of Occupational Safety and Health (IOSH) has called on the Government to take action to improve fire safety, one year on from the Grenfell Tower tragedy.

The President of IOSH Craig Foyle has warned so far there has been “little sign sensible changes are happening fast enough”. 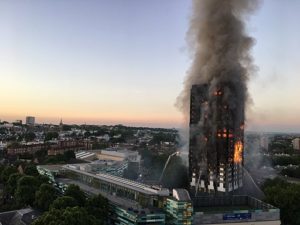 A year ago, IOSH joined with other professional bodies to call for “urgent action” in a letter to the Prime Minister signed by over 1,000 safety and health professionals.

The letter urged “all politicians to re-emphasise the need for effective health and safety regulation and competent fire risk management” and called on the Government to “to accelerate and confirm the timeframe for completing its review of Part B of The Building Regulations 2010 and to include a focus on improved safety in the forthcoming Parliament”.

But now, Mr Foyle said he wants to know what steps the Government has taken to answer those calls for action, one year on from the fire that claimed the lives of 72 residents of the tower block.

“It is vital that steps are taken to ensure that residents, members of the public and our emergency services are never exposed to this level of preventable risk again,” he said.

“During the past year, IOSH has provided responses to establishing the public inquiry terms of reference, addressing one of the early public meetings chaired by Sir Martin Moore-Bick.

“Part of this is having the right people making the right decisions – well-trained, competent personnel. Fire safety is a complex issue, so systems should be clear, simple to understand and proportionate.

“We were pleased to see Dame Judith Hackitt’s review making recommendations aligned with ours.

“It is now up to the Government to act on these recommendations as we work to ensure we never have another tragic fire like Grenfell Tower. We urge the Government to develop an implementation plan as soon as possible. This must be made publicly available and regular updates should be provided,” added Mr Foyle.

SHP has looked at the events following the Grenfell fire and scrutiny of fire safety and response regulations in a one-year-on feature, which you can read here.

Grenfell: IOSH criticises lack of government action one year later The Institution of Occupational Safety and Health (IOSH) has called on the Government to take action to improve fire safety, one year on from the Grenfell Tower tragedy.
Jamie Hailstone
SHP - Health and Safety News, Legislation, PPE, CPD and Resources