Ian joined Informa (formerly UBM) in 2018 as the Editor of SHP. Ian studied journalism at university before spending seven years in online fantasy gaming. Prior to moving to Informa, Ian worked in business to business trade print media, in the automotive sector. He was Online Editor and then moved on to be the Editor of two publications aimed at independent automotive technicians and parts distributors.
November 16, 2018

SHP speaks to Steve Broom, Safety, Sustainability and Training Director at Dyer & Butler, about a Close Call Reporting System which has made the reporting of close calls involving unsafe acts and conditions simpler and has resulted in a reduction in the company’s AFR. 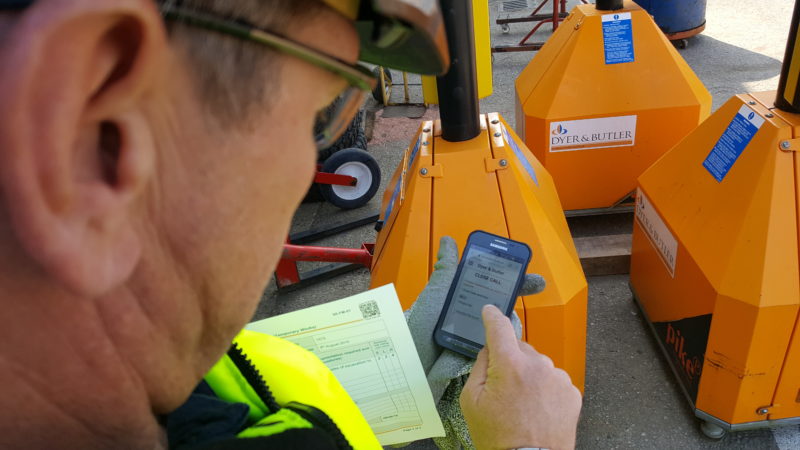 In response to a challenge from Network Rail to improve the overall rate and effectiveness of close call reports, Dyer & Butler set about to design and develop a close call reporting  system that could operate from a smartphone or web enabled device. Steve Broom said :”Network Rail has been really pushing and championing close call reporting and this is a natural progression from the ‘Don’t walk by’ message which has been promoted for a number of years”.  Problems with maintaining quick and effective reports from site have traditionally been time-consuming and many reporting methods  involved returning to the office to fill out and submit reporting cards. This meant that the circumstances relating to the near misses or close calls were sometimes forgotten or went unreported.

Steve Boom said: “The risk is on site, so that is where people want to submit the report. Our challenge was to design a system that would make the process quicker and easier for workers on the ground.”

To respond to this challenge and to assist their workforce in being able to readily report any concerns directly, and in real time, Dyer & Butler’s IT team was tasked with developing a close call reporting system with the purpose of providing a means of reporting these events in order to enhance and support the ongoing delivery of the companies behavioural safety systems. This task was duly taken on by the then apprentice IT Technician, Alex Wiggins.

Alex worked with Dyer & Butler’s safety team and came up with a system using a simple, freely available QR code to act as signpost that could be used by anyone with a QR code reader enabled on their phone. The QR code was then placed on various safety documents, posters, signs and other publications to make it accessible to any employees, clients and to members of the public.  The system is designed to be proactive, in relation to accident and incident prevention and every close call raised is seen as an opportunity to prevent an accident.

When used, the owner of the smartphone simply passes their device in front of the QR code the QR code reader links through to a reporting page on a secure website containing open field text boxes that can then be filled in to record the details of the close call. This process is as easy as sending a text  and once the close call report has been completed, the user simply hits the ‘Submit’ button whereby the close call report is instantly logged into a central spreadsheet on the close call database. At the same time, an email alert is sent to the relevant members of the safety and project team to allow for follow up action to be taken (if required). The reporting system can be used anonymously if preferred, but it is encouraged that the reporters add their name to the reports in order to receive recognition for their positive involvement in managing the safety of the site.

The entire system was developed from the ground up by Alex, who used readily available IT systems, hardware and software to develop the system. As a result of his efforts, Alex has recently won a civil engineering industry award for Safety Initiative and Innovation.

“Every close call that is reported is an opportunity for an accident to be prevented and the importance of maintaining a good close call reporting culture should not be overlooked ,” added Steve.

“As a result of introducing the system the AFR (Accident frequency Rate) dropped to zero for the first time in January this year and we recently completed 18 months of work since our last reportable accident. I believe this has only been possible off the back off this system” he concluded.

Innovation in construction: Making near miss reporting easier SHP speaks to Steve Broom, Safety, Sustainability and Training Director at Dyer & Butler, about a Close Call Reporting System which has made the reporting of close calls involving unsafe acts and conditions simpler and has resulted in a reduction in the company’s AFR.
Ian Hart
SHP - Health and Safety News, Legislation, PPE, CPD and Resources