Into the tunnels at Crossrail – Women in Health and Safety 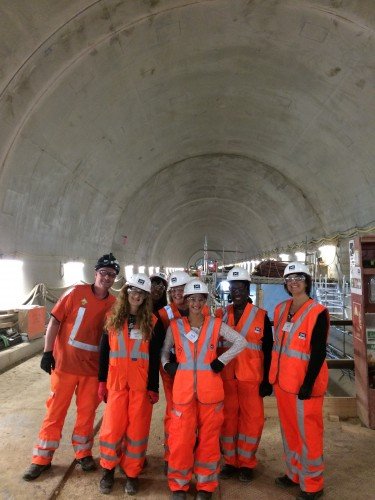 Descending 14 flights of HAKI stairs below ground during the middle of a torrential downpour sounds like the stuff of nightmares for someone afraid of heights, but when I did so during a visit to the Farringdon Crossrail site in mid-September, I felt surprisingly at ease, solely for the reason that I’d already seen how much attention is paid to health and safety on-site.

Myself and fellow members of the Women in Health and Safety group were kindly invited by to take a tour of the Crossrail site at Farringdon, which is a major terminus at the heart of the new network. This is especially poignant, given Farringdon’s history as the terminus of the world’s first underground railway.

One of the first things you notice on site is how many women there are. This is notable as we constantly hear that despite widespread efforts in the construction industry to address the vast gender imbalance, according to official statistics, the UK has the lowest representation of women engineers of any European country, standing at just 8.5 per cent. More female engineers is an important objective of the Crossrail project – even the tunnelling machines were all named after prominent women! This is an important flagship programme as the UK attempts to address the huge looming shortfall of qualified professionals in its construction sector.

Alongside the mandatory site induction, the group was given a brief, but fascinating, introduction to Crossrail by project manager Linda Miller. Linda outlined several engineering considerations, such as the cutting-edge technology (excuse the pun) used to dig the tunnels, how the Crossrail network was dug under and above existing Tube lines and how such a large-scale infrastructure project can be carried out in such built-up and busy areas with historically-important buildings, while maintaining minimal disruption to local residents, businesses and transport.

Over the course of the project, Crossrail has worked hand-in-hand with other organisations, including the Museum of London and the RSPB; with the former on archaeological finds of medieval Black Death skeletons unearthed during the tunnelling; and with the latter on the creation of a man-made island in the Thames Estuary for migratory birds, which was made from 7.5 million tonnes of dirt excavated to create the underground network.

After donning our PPE we made our way underground with Kris Sarmidi to the construction site of the Eastern Ticket Hall. Tunnelling of the Crossrail network was completed here in May of this year and at the moment, the Farringdon section is undergoing waterproofing and the platforms are being built – which will be around twice the length of a standard tube platform.

Cavernous is about the only word to describe what you see underground. It was striking to see how much careful thought has been given to the engineers and maintenance staff both during the construction phase and once the line comes into use, through the use of innovative materials and techniques. Kris was on hand to answer our questions – we had a lot – and was a great sport with taking photos of us in our fluorescent gear.

Most of the underground as we know it was constructed during the late 19th and early 20th centuries and it’s interesting to think how health and safety practices (if any) used during this time compare with those used on the Crossrail project today. There are extremely few similarities I’m sure and the visit confirmed to the group that it’s this core focus of health and safety of workers and the general public as part of such a large-scale construction project that explains why the UK is seen as a world leader in occupational health and safety.

Thank you to everyone at Crossrail Farringdon and Women in Health and Safety for arranging such an excellent visit and for your kind hospitality. It was thoroughly enjoyed by all.

Xenia Koumi is a Director and Consultant at COSAFE LIMITED, a London-based health and safety consultancy. With a background in Regulatory Affairs and Government Communications, she also dabbled in the prevention and management of musculoskeletal disorders (MSDs) before joining the health and safety industry full-time in 2014. In a voluntary capacity she is President of NEPOMAK UK – the UK branch of the World Organisation for Young Overseas Cypriots.

Into the tunnels at Crossrail – Women in Health and Safety By Xenia Koumi Descending 14 flights of HAKI stairs below ground during the middle of a torrential downpour sounds like
Safety & Health Practitioner
SHP - Health and Safety News, Legislation, PPE, CPD and Resources