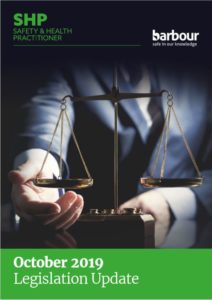 With continued uncertainty over the outcome of Brexit, little else of such importance currently seems to be happening. Businesses have been told to plan for a no-deal scenario and the potential impact it could have on safety, health and environment (SHE) legislation. There is a raft of guidance and information out there to help them do that.

While it has been suggested that UK SHE legislation and product safety law is unlikely to change radically following Brexit, in the short to medium term at least, in the event of a no-deal Brexit, the UK will become a third country immediately as far as the remaining member states are concerned, with no transitional period for businesses to adjust. And that has implications for businesses trading with remaining EU member states.

Issues include those relating to the REACH regulation and the proposed successor regime in the UK. REACH is a hugely detailed and complex regulation. According to the government, in a no-deal scenario, “the UK would not be legally committed to medium- or long-term regulatory alignment with the EEA”. This has several implications. For example, it would mean companies registered with REACH would no longer be able to sell into the EEA market without transferring their registrations to an EEA-based organisation. Companies would therefore need to take action to preserve their EEA market access.

It is difficult to recall a time when the politicians have been so unsure about determining the way forward, and this ongoing uncertainty is damaging to business and investment. Companies can be as prepared as they can be for a potential no-deal outcome, but that doesn’t change the fact that nobody actually wants such an outcome in the end.

Away from Brexit, there was the government’s proposed legislation in July following the 2017 Taylor Review of Modern Working Practices. It includes giving workers enhanced rights to tackle unscrupulous employers who do not comply with the law, assuring millions of low paid workers more workplace protections.

There has also been a consultation seeking views on different ways in which government and employers can take action to reduce ill health-related job loss. Proposals included giving employees with health conditions the right to request workplace adjustments on health grounds, and entitling employees returning from a period of sickness absence to a flexible, phased return to work. The consultation closed on 7 October 2019, so we await the government’s response.

And as ever, health and safety prosecutions have been rife, with fines at or exceeding a million in many cases. In March we saw a £1.8m fine following serious injuries to two workers who fell over four metres through a roof light. Falls from height continue to be the biggest overall cause of death in the workplace, with the latest HSE statistics for 2018/19 revealing 40 deaths from such accidents.

It remains as vital as ever for employers to develop best practices to ensure the safety of their workforce and others who may be affected by their business. Apart from the obvious importance, the reputational damage to companies from an incident occurring because of failing to take preventative measures should not be underestimated.