Gaining a competitive advantage with a strategic approach to mental health

Companies that embrace wellbeing change programmes and recapture the energy of their workforces could gain a significant competitive advantage over competitors, says Geoff McDonald, former VP of Human Resources at Unilever.

After spending 26 years at Unilever, including four years as Head of HR for Marketing, Communications and Sustainability and 12 years as Vice President for HR, McDonald became a full-time advocate for mental wellbeing in the workplace: “I’m trying to create workplaces where everybody feels that they genuinely have the choice to put their hand up and ask for help if they are suffering from a mental illness.”

Because mental health can strike anybody at any time, even “an alpha male South African” like McDonald, who addressed the 2018 Safety & Health Expo. 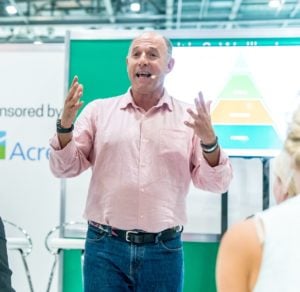 McDonald was the recipient of one of these strikes when, on a January evening in 2008, the night before his daughter’s 13th birthday, he had a sudden panic attack. He felt like he was having a heart attack and couldn’t get to sleep, “catastrophising” everything, finding ulcers and convincing himself he was dying in multiple ways. On his daughter’s birthday he couldn’t bring himself to get out of bed. “The anxiety paralysed me”, McDonald recalls.

He went to the doctor, sceptical of what he could do for him. There was nothing wrong with him physically, after all. But after answering a list of questions about appetite, confidence, weight and irritability, the doctor diagnosed McDonald with anxiety fuelled depression.

McDonald says that his decision to talk about his illness has been liberating, and has kept him alive in his darkest moments. The “power of peers” has given him strength, he says, and despite the generally unwillingness to talk about mental ill health, especially in a professional context, he says that “all he has got back is love”.

But this unwillingness prevails. McDonald himself said that prior to his illness his understanding of depression ended with South Africa losing at rugby, and when he first heard about seasonal affective disorder (SAD) he would say sufferers needed to “man up”.

Several years ago he was confronted with the suicide of his best friend, “the most gregarious, fun-loving individual I knew”. Despite “having the badge and the t-shirt” and being vocal about his illness, his friend had not spoken to him about how he was feeling – “Stigma killed my best friend”.

We wouldn’t think twice about going to the doctor with a physical illness, but, as McDonald says, “we are all physical and we are all mental”.

McDonald says that people recoil when he says this, but that’s because the “mental health brand has been damaged”. Mention it and you immediately picture people with their heads in their hands and struggling to get out of bed. How, he asks, can we shift the narrative?

“If I got into a Nike store, I see all these pictures of these chiseled whippets all over the walls, and I look at how overweight I am and I feel inspired to buy myself a pair of running shoes. With these images of mental health, what is aspirational about maintaining my mental health? Nothing.”

“I’m in such good company: Winston Churchill, Marie Curie, Abraham Lincoln… I long for the day when somebody goes into an interview and talks about their mental ill health challenges, and the interviewer says: ‘You know what? This person might be a better listener, more caring, more empathetic. This person has gone through significant challenges and continues to overcome them. That’s the sort of leader I want in my organisation’.”

The most bemusing thing for McDonald is that some companies are not reacting to mental health nearly enough: “The most limiting resource I see in companies today in every sector is the energy of people. They are frazzled. They can’t wait for the walk out of the door on Friday afternoon.”

The stresses of modern life and work, he says, has “sucked the most important driver of our people – energy”, and yet in his long time working in HR he never once had a conversation about it.

“The reason for that is that I didn’t know what gave people energy. Well now we know: what gives people energy is their wellbeing on four different levels. It’s our physical health, it’s our emotional health, it’s our mental health and it’s our sense of purpose and meaning in our lives. And what we’ve tended to do as organisations is focus on the physical. We’ve spent billions in health & safety, and it’s all gone to safety, and now the time has time to position this whole area of wellbeing as a driver of performance.”

Addressing this is not about “having a wellness week or leaving out a bowl of bananas”, he says. “The concept of wellbeing has to be seen as a change programme. The pressures and demands are not going away, so why don’t we invest in resources to make people as safe and healthy as possible.” And there’s no great mystery to how to do it: this change plan only need follow the principles of any change to work structure.

“Organisations need to be authentic about what we’re doing to people. I truly believe that if we can do that in a strategic way, with leadership engagement and advocacy, that we can turn this whole concept of mental health and wellbeing from something that is about care and weakness into a real competitive advantage in organisations.”

You can find all of SHP Online’s stories from a packed programme at Safety & Health Expo 2018 here.

Competitive advantage has always been linked to Biopsychosocial Wellbeing and having a basic set of “given” conditions that sustains functionality in terms of occupational health especially now in a 24/7 world of always feeling being at the beck and call of our eye-straining digital devices. Whether in education or the workplace the insidious display screen equipment now demands attention to the point where far too many are not only becoming addicted to the things but, also harmed as the risk of prolonged use or operation of more than an hour a day presents in Screen Fatigue or worse repetitive stress… Read more »