Principal contractor ordered to pay more than £250,000 after banksman dies in strong winds 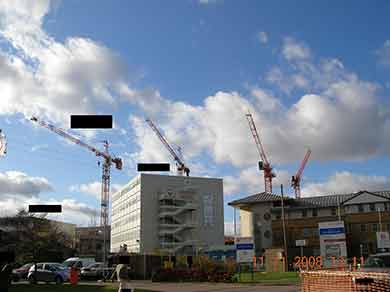 The HSE has urged companies to look at their control systems regarding lifting operations, following the prosecution of a London firm after a worker was killed by a large concrete beam during a dangerous lifting operation in winds in excess of 72km/h at a hospital construction site in Essex.
Guilherme de Oliveira, 44, from Portugal, sustained fatal crush injuries in the incident at Broomfield Hospital in Chelmsford on 10 November 2008.
Bouygues UK Ltd, the principal contractor for an extension project at the hospital, was sentenced yesterday (26 February) after an investigation by HSE identified serious safety breaches in their lifting operations.
Chelmsford Crown Court heard that Mr de Oliveira was working for Bouygues through an agency as a banksman, and was fixing beams across supporting towers to form part of the concrete structure for a new building. The beams were lifted from ground level to the work area by a tower crane.
Mr de Oliveira and another banksman climbed the support towers to unhook the lifting chains from the concrete beam, which was some seven metres in length and was due to sit almost three metres off the ground.
The beam was lifted into position, but the weather on the day was worsening with increasing wind speeds. Before Mr de Oliviera was able to disconnect the chains on the beam at his side, the wind gusted at such a speed that it exceeded the safe working parameters of the tower crane.
As a result, the slew brakes slipped and the crane moved with the wind. The sudden movement caused the crane to swing round with the beam, which caught Mr de Oliveira and crushed him between the beam and an adjacent tower. The wind speed at that time was in excess of 72km/h.
The HSE investigation found that four tower cranes were in operation at the site, each one fitted with a sensor that measured wind speed and provided warnings at pre-set values: an amber warning at 50 km/h or more and a red warning at 72km/h or more.
The sensors were linked to a computer in the site office to allow managers to monitor data and supervise lifting operations. However, at the time of the incident it was not being monitored and on-site arrangements allowed crane operators to check their own wind speed displays. So they would only have stopped lifting if they considered it necessary, and not necessarily when the maximum wind speed limit was exceeded.
HSE concluded that there was inadequate planning and supervision of the work. Had a suitable management procedure been in place and followed there would have been the opportunity to properly consider the deteriorating weather conditions and then take the tower cranes out of operation.
Bouygues UK Ltd, of York Road, London, SE1 was fined £175,000 and ordered to pay £80,000 in costs after pleading guilty to breaching regulation 8 of the Lifting Operations and Lifting Equipment Regulations.
Speaking after the hearing HSE inspector Dominic Elliss, said: “Although the judge was not satisfied that the company’s failings were a direct cause for Mr de Oliveira’s death, he said there was a systemic failure where a risk of serious injury was foreseeable.”
“Lifting operations can be highly hazardous and the appropriate standards are clearly set out in both the regulations and industry guidance. There is no excuse to ignore them and I would urge all those undertaking such work to review the effectiveness of their own controls to ensure safety on construction sites.”

Why did it take 5 years to conclude the case??