A London Zoo safety breach saw a keeper, who was cleaning out a hawk aviary, fall off a faulty step ladder that was wrongly retrieved from a skip. 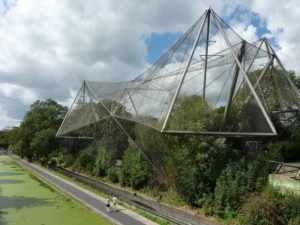 Angelina Lawson suffered neck injuries in the accident while removing droppings from a shelf under the birds’ perches.

According to reports, the step ladder had been consigned to a skip because it was defective, but was accidentally brought back into use as it had not been labelled as faulty.

Westminster Magistrates’ Court heard that Ms Lawson was working eight feet (2.5m) above the ground when the ladder gave way. She spent several weeks recovering from soft tissue damage to her neck.

The Zoological Society of London, the charity which runs the zoo in Regent’s Park, admitted two health and safety breaches.

District Judge Richard Blake said: “Ms Lawson had not received any training with regard to the use of ladders during her four years of employment. The lack of that training was a direct cause of the accident. As a result of this incident enquiries took place and this resulted in the prosecution before me. Ms Lawson had completed four aviaries using the ladder and was on the last one when the fall occurred.

“Whilst cleaning the surface the ladder collapsed beneath her. She was advised by a doctor she sort to take rest for concussion. She attended hospital the next day for an x-ray which showed swelling of the soft tissue and also diagnosed with concussion which can last up to a month.”

The zoo started its own investigation into the accident, which happened on 16 July 2016, and then informed Westminster council, which brought the prosecution.

Charles Barry, representing the zoo, told the court Ms Lawson had been due to have ladder training when she fell, but was “at the bottom of the list” as she did not usually work at height. Mr Barry pointed out that any profit from the zoo’s £50 million annual turnover is used for its animal conservation work, urging the judge to limit the fine imposed.

Judge Blake fined the Zoological Society a total of £40,000, with costs of £8,000. Deciding the start point for the offences was £150,000 Judge Blake reduced the fines by a third for guilty pleas to £100,000 and reduced the figure further taking into account mitigation.

He added: “In the circumstances I consider having regard to the charitable nature of this organisation, it is appropriate to take that into account by halving the fine to £50,000 in each instance.  I reduce the fine further in respect of each offence. I have dealt with this in the manner I have very much recognising the nature of the Zoological Society.”

Judge Blake said he had sent a “powerful” message to the Society arguing £40,000 was a “significant sum” to amass.

How to work safely with ladders and stepladders

Listen today!
London Zoo safety breach: Keeper suffered neck injuries in faulty stepladder fall According to reports, the step ladder had been consigned to a skip because it was defective, but was accidentally brought back into use.
Alison Fava
SHP - Health and Safety News, Legislation, PPE, CPD and Resources