Women in health and safety: the challenges facing design construction and operation of modern railway

Capita held a Women in Health and Safety event where professionals from design, construction, operation and legal departments gave insights on the challenges they face. 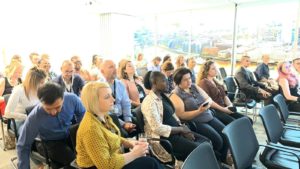 Capita Real Estate and Infrastructure works with public and private sector organisations to design, build and optimise their real estate and infrastructure assets.

Event organiser Fiona Anniss, Associate Director for Health & Safety at Capita Real Estate and Infrastructure, began by outlining the four topics that were to be covered, design, operation, construction and legal.

A range of speakers included, Laura Walker from Aecom and Uta Horten from Capita who spoke about design, Dinara Skeiryte from HS2 talking about construction, Julie Bignell from Porterbrook speaking about operation and lastly, Julia Thomas from Tucker Solicitors and Monica Babb from ORR discussing the legal side of health and safety.

She said that Equality Impact assessments should be able to achieve these key elements:

She also explained that when creating an Equality Impact Assessment, all nine characteristics of the Equality Act 2010 must be imposed:

Uta discussed the different types of surveys and the health and safety aspect of surveyors in the ACI JV project. She talked about how the biggest safety hazards on sight its surveyors, and in the past year it has carried out 17,000 surveys, Uta expressed that the “health and safety of surveyors is the biggest chunk of [her] day. The largest amount of people in risk is when there is an interaction with members of the public.

To ensure that safety has been covered all round, HS2 has a ‘Safe at Heart’ model, which aims to incorporate the safety of all employees as well as the communities they work in.

Dinara Skeiryte, Project Manager from HS2, discussed the challenges in major infrastructure projects delivery and what extra requirements need to be considered on top of day to day engineering issues.

She began by tasking the audience to describe how an engineer looks and what they do. She expressed that a stereotypical image of engineers, with hard hats and visibility vests, are often the first thing that spring to mind, and the first thing that Google images shows when searching for engineers.

But Dinara, also a Civil Engineer, stressed that in reality infrastructure projects are not just for construction. For example, community engagement, public speaking, health and safety, interfacing, customer service and legal knowledge are all sectors that engineers will work with.

Julie Bignell, Head of Safety & Operations at Porterbrook said that, despite innovation on the railway with the implementation of new technology passenger behaviour, particularly around the platform train interface, continues to be a problem. Julie’s presentation focused on how we can influence passengers to be safe on the railway.

The British railway network is one of the safest on the planet, and London Underground was the first ever underground railway in the world. Its passenger numbers have doubled over the past 20 years.

But because its passenger numbers have increased, more safety features were required and have been put in place, for instance, the rolling stock fitments of TPWS to cut SPAD risks, more sophisticated in-cab communication systems and the withdrawal of less crashworthy rolling stock and slam door stock.

However, Julie expressed that despite all the safety measures, there is still one factor that has been harder to control, passengers.

There have been 10 passenger fatalities in 2018/2019 and an increase in major injuries in this year in comparison to the previous. There has also been a 14% increase in the level of overall harm when normalised by passenger journey. Julie explained that the main risks to passengers while on the railway are slips, trips and falls in and around the station and on the platform.

She showed the audience images of different cases where passengers found themselves in avoidable accidents, like falling between the gaps between a train and platform despite warnings, pointing out that it could happen to anyone. This is a result of passengers committing unsafe acts. Mobile devices, distractions such as earphones, passengers that are unfamiliar with the railway such as tourists, as well as passengers that are familiar with the railway such as commuters and frequent travellers, are all causes to unsafe acts.

Julie explained that by turning to behavioural science techniques such as the Nudge theory, this will help mitigate unsafe acts. The Nudge Theory promotes positive reinforcement and suggestion techniques to influence behaviour and decision that people make. This was introduced as passenger growth on Britain’s railway is expected ahead, thus different approaches should be considered and not just physical mitigation.

Julie played a clip of The Nudge Theory in action, where stooges stood behind a yellow line on a platform to see if people will follow, results showed that people nearer to the stooges also stood behind the yellow line.

Julia Thomas, Lawyer at Tucker Solicitors, and Monica Babb, HM Inspector of Railways at ORR, focused on legal cases and anecdotes around prosecutions.

Julia went through the purpose of the Construction (Design & Management) Regulations 2015 which are to:

She expressed that the most important safety regulation for those that manage construction, is Regulation 15(2) of CDM 2015. “I will look at that regulation first to see if it is complied with” she says.

The Women in Health and Safety network is run by an independent committee, Chaired by Dr Judith Grant, Director of Health and Wellbeing at Mace. The network hosts free-to-attend events, for all health and safety practitioners, which take place throughout the year around the UK.

Women’s health – We need to do more

‘Some people will hit a crisis level in their wellbeing, and we need to help them prepare for that’