Ian joined Informa (formerly UBM) in 2018 as the Editor of SHP. Ian studied journalism at university before spending seven years in online fantasy gaming. Prior to moving to Informa, Ian worked in business to business trade print media, in the automotive sector. He was Online Editor and then moved on to be the Editor of two publications aimed at independent automotive technicians and parts distributors.
April 8, 2021

SHP speaks to Cleveland Police Blue Light Programme Coordinator & Wellbeing Inspector, Phil Spencer, who was named as the winner of the SHP Award for Trailblazer in Workplace Wellbeing back in December. 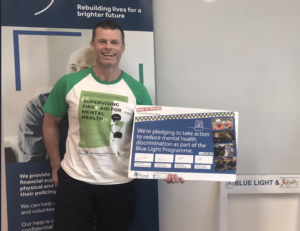 Having previously worked as a lifeguard and a gym instructor, Phil Spencer joined the police aged 30. In recent years, he has been a key component in driving forward the workplace wellbeing agenda and changing the way mental health is thought about in policing. He has transformed how Cleveland Police supports its staff in better understanding mental health, and how to cope with the trauma and difficulties of the working environment, especially during the pandemic.

The Blue Light Programme was initiated by Mind in 2014, after recognition from the Government recognised that something needed to be done to help the emergency services with the work they do and the kind of trauma they are regularly faced with. Phil got involved in the programme in 2016: “It was just something that interested me,” he said.

“Looking back, I could see where it was all going. It wasn’t going to go away, it wasn’t going to be a quick fix, and it needed to be a sustainable programme and initiative.” Phil said that one of the things that appealed to him about the programme was how it was something that was ‘for us’. “Not meaning to sound selfish, but our job is to protect vulnerable people and communities, but nobody was looking after us, or trying to look after, us because it just wasn’t the done thing.

“I was given an attachment for three months to set it all up, and that ended up lasting nearly two years. Then I went back on frontline and it just kept snowballing.” Phil said that the programme has seen his career develop in a way that he would not have imagined, including running training and becoming a qualified Mental Health First Aider.”

General members of the public, on average, experience four traumatic incidents in their lifetime, compared to police officers and staff, who can experience between 600 and 800 over their career. Last year, SHP focussed on the growing discussion around supporting the mental health of child sexual abuse investigators. We have also reported on how the secondments of London Ambulance Service Paramedics with London’s Air Ambulance are relatively short, because of the extreme high level of trauma that is witnessed during that time.

General members of the public, on average, experience four traumatic incidents in their lifetime, compared to police officers and staff, who can experience between 600 and 800 over their career. 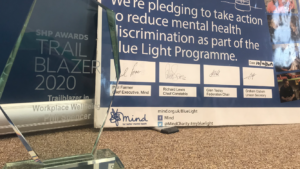 “I was blown away though. Yes, it is my name on the trophy, but it’s a massive team effort. We’ve got 130 Blue Light champions, that all have their day jobs, and are helping colleagues. I’ve got a great wellbeing team here.”

Phil’s drive and desire for wellbeing really kick-started in 2015 when he was assigned as a Welfare Officer for two of his Sergeants who were signed off with PTSD. Phil said he could see the officers disintegrating before his eyes and that there were times, on home visits, that he became worried about their safety. He said, “I’m a police inspector, but I’m also a husband and a dad and I needed to do something about this.”

Phil said he was forced to adapt after losing his ‘coping mechanism’, of being able run regular marathons when he suffered a prolapsed disc. “I thought I wasn’t going to be able to walk again. I got into cycling, but it taught me a lesson that running was my stress buster. I was on three mental health drugs at the time and I felt alienated and that I had to keep if confidential. So I had to find a different way, and that’s why a lot we always tell people, you will you will have your coping mechanisms, you will have your stress buster, you will know what makes you feel well. It might even be watching Netflix all weekend, but if that works, do it and do it often. For me, that’s now cycling.

He also spoke candidly about his daughter being diagnosed with anorexia. “It was the worst time of mine and my wife’s life, our world collapsed. I was going to work and putting a brave face on, but when I was at home I fell to bits. As the ‘man of the house’, the ‘strong Dad’, the ‘police officer’, I had no idea what to do; I felt helpless. How had I not seen this coming or recognised the signs and not been able to help her before it got this far?

“I realised that if I could do even a little bit, it would help. I won’t be the only person, general public, family, that have young kids, or elderly parents and are struggling. I ended up writing a blog about it. It will hurt when I wrote it, three years after, but I wanted to get it out there.” 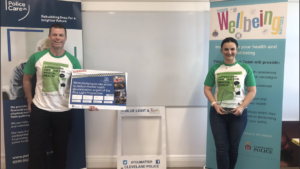 The added stresses of working on the frontline during the coronavirus pandemic brought about its own issues for the force. Phil and his team spent two or three months on the road between March and April 2020, providing support to frontline officers working night shifts and weekends. “We were giving out lots of freebies, refreshments, toys, chocolate, but also leaflets about trauma about wellbeing and information about where they could get that support, if they needed it.”

“It was that visibility of somebody going out and getting across the message of what we do and the services that we can provide.

Phil spoke about his frustration about how the police are perceived. “This time last year, everyone was out on the step clapping on emergency services, particularly NHS and rightly so, and I think there was a lot of public support for every one of us.

“For me that lasted two weeks for the police, and then, all of a sudden, we were the bad guys again. We were ‘lazy’, we were ‘racist’, we were ‘corrupt’. Black Lives Matter didn’t help, people were demonstrating about COVID. The police officers were enforcing the law and having to hand out fines to people. All of that affects you. You’ve got the pandemic, you’re worrying about going in houses, have you got the right PPE on? And then you’ve got the media twisting the knife.”

“As policer offers, we’ve dealt with it, as we do as we do. We run towards a terrorist attack, we run towards a pandemic. It would just be nice to get a little bit more support from the public now and again.”

Subscribe to discover the latest issues facing the health and safety profession, and stay on-top of the developments affecting your role, from working at height, lone working and common workplace hazards, to safety culture, behaviours, occupational health and mental health and wellbeing.

Listen now!
‘You need the right people doing it for the right reasons,’ Phil Spencer on wellbeing in the police SHP speaks to Cleveland Police Blue Light Programme Coordinator & Wellbeing Inspector, Phil Spencer, who was named as the winner of the SHP Award for Trailblazer in Workplace Wellbeing back in December.
Ian Hart
SHP - Health and Safety News, Legislation, PPE, CPD and Resources