Safe standing – could it be coming to the Premier League? 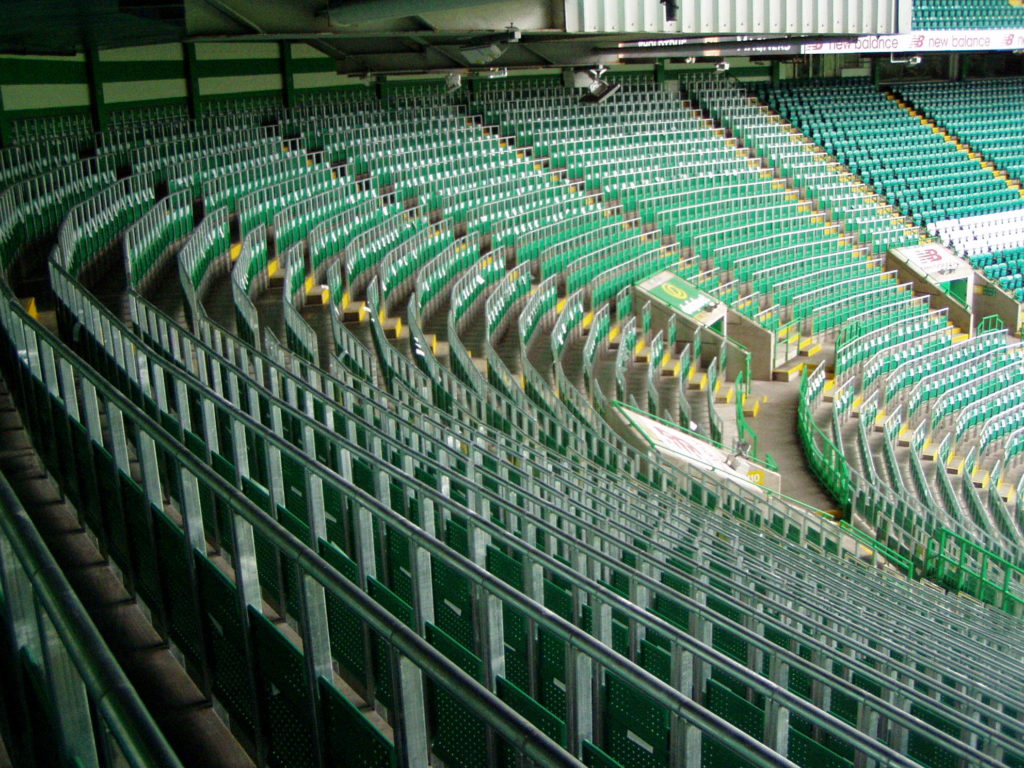 As the new football season kicks off, and as Liverpool fans support the idea of safe standing, SHP takes a looks at the details and health and safety issues around rail seating.

When ‘safe standing’ is discussed, the chances are people are talking about rail seating. It is this product which is the most likely one to be applied into the Premier League, should legislation be changed allowing grounds to incorporate safe standing options.

Rail seating is where a seat is locked into an upright position for domestic games and supporters stand between barriers that are put in place for every row.

Each seat incorporates a high back with a top rail to the waist height of the spectator standing behind it. The top rail behind each seat links into the next one along the row, creating a continuous barrier along its full length.

The primary function of the ‘seats’ is to create a rail for spectators – and when seats are folded flush with the rail frame, the whole product is only a few centimetres deep. This has important safety implications, creating ease of access and egress for stewards and paramedics.

The height of rails is defined by the Green Guide for barriers in standing areas of lower league football ground and rugby union and league facilities. Currently it is 102cm.

Information from the Safe Standing Roadshow:

One popular version of the rail-seat is the ‘lock and latch’ mechanism. A key lock enables the stadium operator to lock the seat out of use. When unlocked, the latch mechanism enables a spectator to lower and raise the seat and put it ‘on the latch’ as necessary for ease of access and pass along a row.

It the preference for most supporters groups and stadium officials when they are discussing rail seating areas in the UK – and a variant of it was applied at Celtic FC.

Although there are other options for safe-standing in European arenas, such as ‘clip-on’ or foldaway seat options, the most likely application in the English and home leagues is still rail seating.

The Safe Standing Roadshow’s Jon Darch, an expert on the concept, suggests a ground should use around 10% of its capacity for home fans as safe standing with an option for 5% being used for away fans.

Application in the UK

Currently under the rules laid out by the government following the Hillsborough disaster and the subsequent Taylor Report, the top two-tiers of English football – the English Premier League and Championship – must have all-seater stadiums to host matches.

Celtic FC, as a Scottish football ground, does not fall under the remit of the all-seater legislation. As a result, it has been able to apply its rail seating in a small section of the stadium for 2,900 supporters.

Although the government says it is ‘closely monitoring’ the situation in Scotland, it currently remains ‘unconvinced’ by the proposals. It is understood that the Premier League has consistently been talking to Premier League clubs about the issue, and is currently in a period of surveying clubs on the topic.

But there has been significant movement on the issue at a supporter level. One of the biggest shifts was a poll of Liverpool supporters last week with 88% supporting the proposal. However, the official position of the football club and Hillsborough Family Support Group is against the concept.

West Bromwich Albion has re-iterated it is keen to trial the idea, having visited Celtic on a fact-finding mission, and Arsenal have surveyed supporters and begun preparatory, investigatory work on a section of the ground should rules change.

Tottenham Hotspur has gone as far as to illustrate to fans how safe standing could work in its new stadium, currently being constructed in north London.

Fantastic to see we are trialling #SafeStanding in the North stand ahead of the possible rollout in the South stand #COYS #THFC #AMF pic.twitter.com/g4tEwChjcX

There is also concern regarding the current all-seater arrangements, as some fans insist on standing, despite being against the official guidelines of clubs.

Last year’s match between Manchester United and Hull City saw a woman crushed as United fans rushed forwards over the bucket seats and towards the players following an injury time winning goal.

There have been also numerous issues around standing at West Ham’s new London Stadium – an adaptation of the previous Olympic Stadium in the Queen Elizabeth Olympic Park. It has seen fans arguing amongst themselves as some wish to stand and others want to sit.

This is where safe standing evangelist Jon Darch comes into the equation. He is on a one-man mission to convince the authorities to relax the rules in a responsible and thorough manner – and firmly believes safe standing is not only the future, it is a safer option than present for those fans who wish to stand.

He spoke to SHP:

“At every game, hundreds, if not thousands of fans, stand in one or two areas of grounds that are not designed for the purpose, i.e. behind standard seats with low backs that form a fulcral point half-way up the spectator’s shins and thus represent a trip hazard.

With rail seating every fan has a sturdy rail in front of them.

Fans thus cannot fall forward or be knocked into by fans falling forward from behind. The classic ‘domino effect’ of progressive crowd collapse is thus physically impossible in areas of rail seating.

In my view safe standing is significantly safer than the status quo. Fans stand behind low-backed conventional seats, where progressive crowd collapse can and does occur.

You only have to look at fans’ social media accounts on Saturday evenings to see images of cuts and bruises on many a shin after a fan has been caught while celebrating a goal by the relatively sharp edge of the plastic seat-back in front of them.

Fans falling forward one or two rows is also not uncommon. Such involuntary surges are 100% impossible with waist-high rails along every seating row.

In fact, one could argue that the safety authorities should be demanding in areas of stadia where the operator knows that fans will stand (and tolerates this) rail seating be fitted to make those fans safer.

The EFL is an interesting situation and shows how crazy the current legislation actually is.

The standing ban was never about safety. It was a very blunt tool forced on the football industry by the Thatcher government designed – along with their proposed national football supporter ID card scheme – to counter hooliganism and was announced less than 48 hours after the Hillsborough disaster at a time when the media narrative was that this had been caused by hooligans.

That version of events has long since been discredited and so should be the standing ban that it spawned. 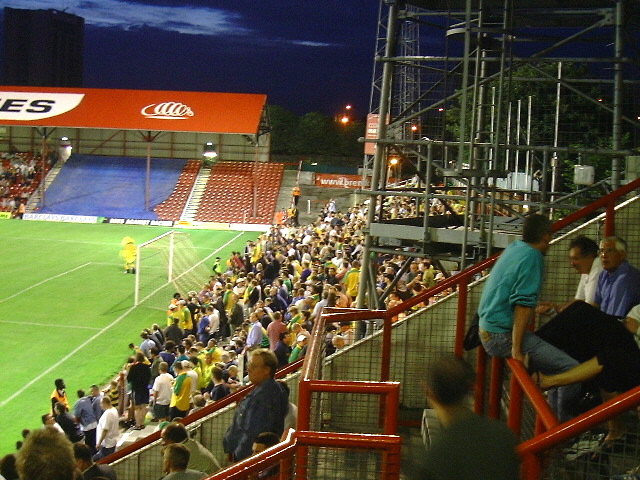 However, we still have the ban and the consequences of it are bizarre: if standing is unsafe, why do we have grounds with standing? Brentford and Burton Albion play in the Championship with terraces.

Fans like it and no disasters occur. 21 clubs in total in the English Football League still have terraces. If the government seriously believes that these are death traps, why aren’t the grounds closed down!?

The answer, of course, is that the ban is not based on logic. Ground operators, safety managers and stewards are perfectly capable of operating standing areas safely – whether they be conventional terraces or new-style safe standing areas using rail seats.

And the Sports Ground Safety Authority has now recognised the latter by putting in place a policy whereby all EFL clubs not required by law to have all-seater grounds can, if they wish, apply for consent to fit rail seats to use as standing spectator accommodation.

It is this process that Shrewsbury Town is now purusing in order to fit rail seating at their ground, which, although it currently has only seats, is not required to be all-seater by law.

Like all clubs with all-seater grounds, the club does have some fans who choose to stand behind their seats. Like most safety officers and stewarding teams up and down the country, the team at Shrewsbury choose to manage this rather than create potential conflict by trying to stamp it out.

Now, with the planned installation of rail seats, they aim to provide their standing fans with a safer, dedicated environment for them to enjoy the match in their preferred manner, while simultaneously relocating those supporters from a block close to the away fans (a potential flash-point) to an area 100 yards away from the visiting fans in the stand at the opposite end of the ground.

So the solution not only makes the standing fans safer, but has crowd control benefits as well.

Very poor article based upon emotion and personal bias, for example, it is irrelevant whether 88% of Liverpool fans want to stand, there is no more weight to this argument just because they are Liverpool fans. (who’s supporters died at both Hillsborough and Hysel). I remember standing at football matches as a young kid, so packed in you could hardly breathe, repeatedly crushed as the crowd moved one way or another, fans urinating where they stood because they couldn’t get to the toilet. yes some people stand in the seating area and there will be disagreements, thats is for the… Read more »

Since within the lower league’s a large number of fans prefer to stand and ignore safety regulations this type of solution should be encouraged.

In fact the Shrewsbury crowd funding page is now open.

Safe standing will provide those who manage ground safety a stronger position to enforce sitting in a seated area since an alternative is available within the ground.

This is therefore a win-win situation for stewards and the fans. By will benefit with fans enjoying games in a way they want to (standing) with stewards now facing fewer unneeded confrontations