Pregnant Then Screwed: how 54,000 women are forced out of work each year 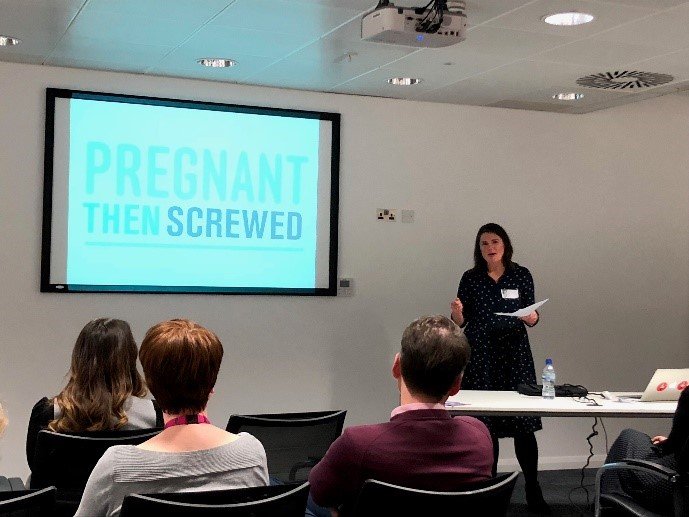 The Women in Health and Safety Network came together in Leeds this week to discuss the gender pay gap, why it exists, and what it means for both men and women at work.

Hosted by Landsec at Trinity Leeds shopping centre, one of 15 shopping centres owned by the company, the event was led by Joeli Brearley, who founded Pregnant Then Screwed after she was sacked (by voicemail) at four months pregnant.

There are more men called Steve running FTSE100 companies than there are women in total.

Joeli, who appeared on BBC Radio 4 this week on the Today programme, started Pregnant Then Screwed to “support and promote the rights of mothers who suffer the effects of systemic, cultural, and institutional discrimination”.

The community interest company does this by offering a free legal advice service, a website where women post their stories of discrimination anonymously, lobbying the Government for legislative change, and a mentor scheme that supports women who are considering legal action against their employer.

Introducing the topic, Joeli explained the key difference between equal pay – when work of equal value is paid differently, and the gender pay gap –  the average difference between men and women in terms of pay, irrelevant to sector.

On average in the UK women will be paid 18% less.

What Joeli made clear is the huge gap in pay we have between men and women which averages over 18%. And the main reason for this? Motherhood. Joeli said that 54,000 women a year in the UK are losing their jobs for getting pregnant, with a further three in four working mums encountering discrimination at work. 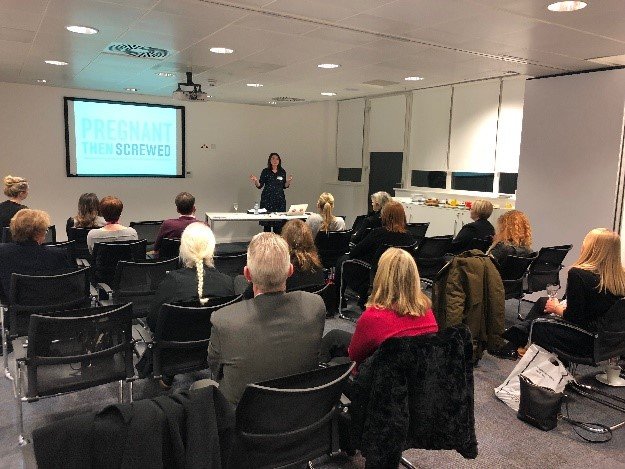 Motherhood may be a choice, but the gender pay gap isn’t says Joeli.

“The gender pay gap is a productivity pay gap – where we are not using 50% of people effectively. Gender parity in senior positions is proven to make a company better. Putting obstacles in the way of career progression is a real problem.” she said.

“The gender pay gap isn’t about choice, it’s made in a vacuum influenced by many things – presenteeism, incentives for women to leave work, the most expensive nursery system in the world, and the difficulties to split parental leave between a man and a woman.

“54,000 women being pushed out of the workplace for getting pregnant is not a choice. One in five working mums are forced to leave their job because a flexible working request been turned down” continued Joeli, adding: “Women in Nordic countries tend to make very different choices because they have very different frameworks which incentivise dads to take time off.” 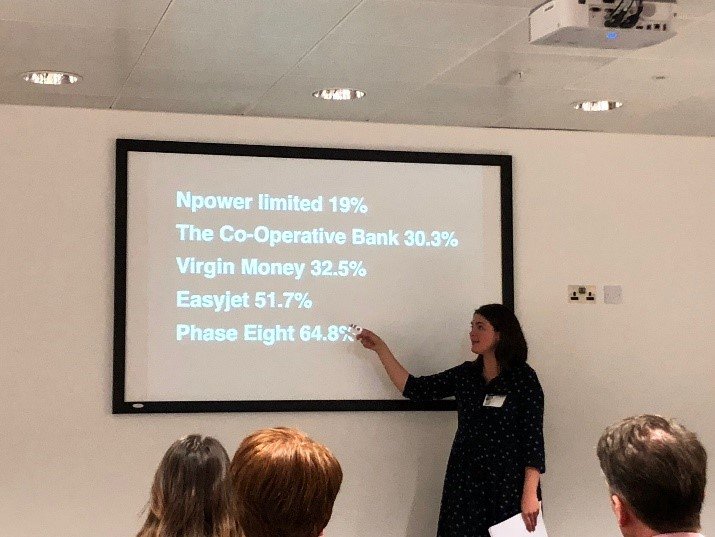 On parental leave Joeli explored the choices she had. As her partner was self-employed, he had access to nothing. However, a self-employed woman would have access to statutory maternity payments. Employed women also get offered 6 weeks of pay at 90% pay, something not offered to men. The statistics show that fathers get paid 21% more than childless men.

This coupled with the most expensive nursery system in the world (the cost of childcare is rising four times faster than wages) and a huge problem around presenteeism, where many people work more than 48 hours a week – yet productivity is very poor; leads to many women “paying” to go back to work.

“I was earning less than I was paying in nursery bills, but I wanted a career” she said.

What can we do moving forwards?

Speaking to SHP, Joeli said: “Health and safety professionals should encourage their employers to sign up to the Working Forward programme by the Equality and Human Rights Commission.  It is free and they will support you to reduce pregnancy and maternity discrimination in your workplace”.

Joeli concluded: “If you want to retain your workforce and want to reduce gender pay gap – make your workplaces work for parents.”

If you would like to take part in future Women in Health and Safety events, or would like to host your own regional event, visit SHP’s guide on becoming a part of the network here.

Developing non-technical skills and overcoming a lack of confidence

In this episode of the Safety & Health Podcast, we are joined by Anna Keen, Founding Director at Acre Frameworks, who provides guidance on learning the relevant skills to progress your career and delves into confidence, including how to present yourself and tips for leaders when dealing with Imposter Syndrome.

Pregnant Then Screwed: how 54,000 women are forced out of work each year The Women in Health and Safety community came together in Leeds this week to discuss the gender pay gap, why it exists, and what it means for both men and women at work.
Lauren Applebey
SHP - Health and Safety News, Legislation, PPE, CPD and Resources